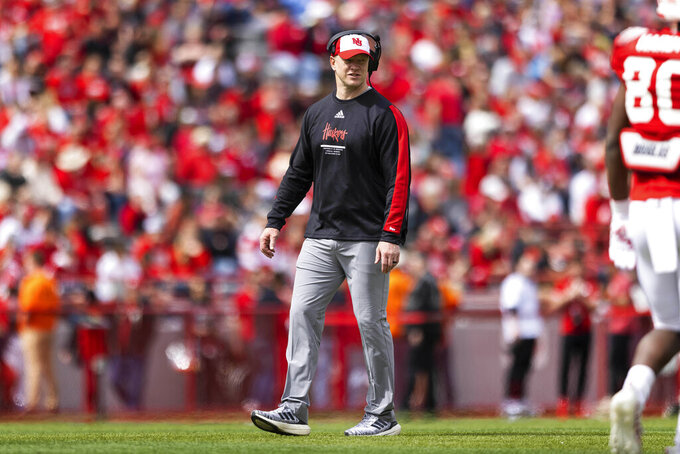 FILE - Nebraska head coach Scott Frost watches from the field during the second half of Nebraska's NCAA college football annual red-white spring game at Memorial Stadium in Lincoln, Neb., Saturday, April 9, 2022. Frost will not be allowed to perform his football coaching duties for five consecutive days this season as part of Nebraska's negotiated settlement with the NCAA for allowing an unauthorized staff member to do hands-on special teams coaching. (AP Photo/Rebecca S. Gratz, File)

Scott Frost will be barred from coaching for five consecutive days this season as part of Nebraska's negotiated settlement with the NCAA for allowing an unauthorized staff member to do hands-on special teams coaching two years ago.

The NCAA contacted Nebraska after a media report on the January 2021 resignation of special teams analyst Jonathan Rutledge and possible violations he committed in his role. Rutledge is now special teams coach at Division III Catholic University.

The NCAA said Monday that Frost failed to demonstrate he monitored Rutledge's activities. Videos of practices showed Rutledge worked directly with players during special teams drills. Rutledge also was found to have assisted with or made tactical decisions during games in 2020.

During his five-day suspension, Frost will not be allowed to be present in the facility where practices are held or communicate with football staff or players. Frost also will be barred from studying video with players or coaches or participate in team meetings or recruiting. He also must attend an NCAA regional rules seminar at his own expense.

The NCAA described the time frame for Frost to serve his penalty as the “championship segment of the 2022 football season,” which includes the regular season through bowl games. Nebraska could choose to have Frost serve his penalty during weeks with open dates in late September or late October.

Non-coaching staff members also will be removed from practice and competition for five consecutive days this season. Nebraska was fined $10,000 and will have one-year added to probation, through April 27, 2023.

Nebraska went on two years' probation in 2020 after its women's gymnastics team was found to have exceeded the number of allowable coaches when the former head coach arranged for a volunteer assistant coach to receive impermissible compensation from 2014-18.

Athletic director Trev Alberts said he appreciated the collaboration between Nebraska and the NCAA in bringing a resolution to the matter.

“It is important for the Nebraska Athletic Department and football program to put this matter behind us and turn our full attention to the upcoming season," Albert said in a statement. "We are pleased with the outcome and believe the negotiated resolution is fair and equitable. At Nebraska we are committed to running an athletic department that is fully compliant with all NCAA rules.”