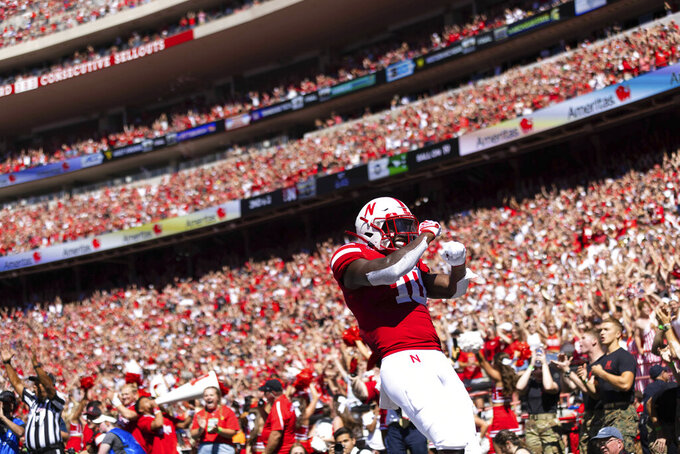 Nebraska's Anthony Grant (10) runs in a touchdown against North Dakota during the first half during an NCAA college football game Saturday, Sept. 3, 2022, in Lincoln, Neb. (AP Photo/Rebecca S. Gratz)

Line: Nebraska by 21 1/2, according to FanDuel Sportsbook.

Nebraska ended a seven-game losing streak last week against North Dakota and goes for a second win in a row for the first time since early September 2021. The Cornhuskers also are looking to build momentum for their home game against old rival and seventh-ranked Oklahoma next week. Georgia Southern, picked fifth in its seven-team division in the Sun Belt Conference, got the Clay Helton era off to a solid start against overmatched Morgan State and now looks to knock off a Power Five opponent for the first time since upsetting Florida in 2013.

Nebraska defense vs. Georgia Southern offense. The Cornhuskers' defense will see a little bit of everything from the Eagles and must stay disciplined. Georgia Southern has scrapped the triple-option offense and now combines between-the-tackle runs with a passing game that stresses defenses.

Georgia Southern: QB Kyle Vantrease has the advantage of having played in Memorial Stadium. He was the starter for Buffalo in its 28-3 loss last year. Last week, he connected with 10 different receivers while throwing for 367 yards and four touchdowns against Morgan State.

Nebraska: LB Nick Henrich missed last week's game against North Dakota with a minor injury and should return. Henrich gives the defense a veteran presence at linebacker along with Luke Reimer, and that experience will be invaluable against an offense that uses every inch of the field.

Georgia Southern will be paid a $1.423 million guarantee. ... . Nebraska will wear throwback uniforms honoring the 1983 “Scoring Explosion” team that went 12-1 and averaged 50.3 points per game. ... Anthony Grant is the first Huskers running back with consecutive 100-yard games since 2018. His 145-yard-per-game average is third nationally among players who have been in two games. ... This is the Eagles' third game against a Big Ten opponent. They lost at Indiana in 2017 and in the last minute at Minnesota in 2019.