Huskers hoping to push back this time against physical Iowa 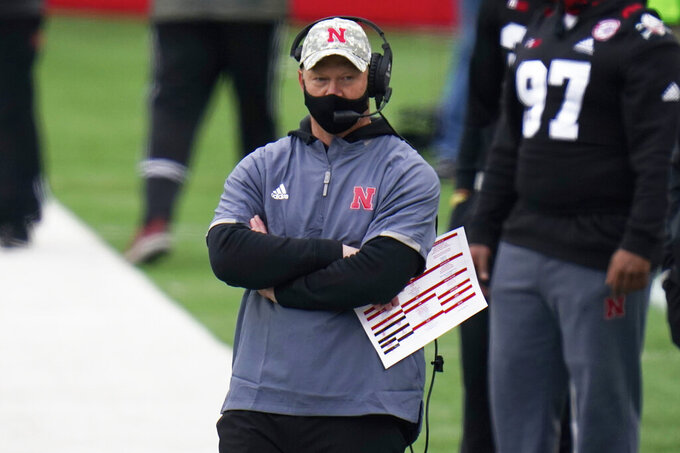 Nebraska knows what's coming whenever it plays Iowa. The hard part is stopping it.

The Cornhuskers (1-3) are looking to end a five-game losing streak in the border-state rivalry with the Hawkeyes (3-2) on Friday. Iowa beat Nebraska the last two times on field goals at the end.

The Hawks always seem to win the physical battle. They've rushed for at least 225 yards in each of the last four meetings, and their run game is averaging better than 5 yards per carry this season.

“It's going to be a black-and-blue game like it always is against those guys,” Nebraska coach Scott Frost said. “They’re going to make you earn it.”

This will be the 10th meeting since Nebraska joined the Big Ten in 2011. Iowa is 6-3 in the Heroes Trophy game.

The Hawks also have longstanding rivalries with Minnesota and Wisconsin in addition to the annual Cy-Hawk game against Iowa State. But this relatively new day-after-Thanksgiving tradition always inflames passions on both sides of the Missouri River.

“I don't really have a personal hatred towards those guys or anything like that,” Iowa defensive lineman Daviyon Nixon said. “But with our state and the love we get from our fans, you kind of feel some sense of responsibility when we're playing against these guys to go out there and play your best and win.”

Frost has not announced his starting quarterback. Adrian Martinez, the incumbent coming into this season, started the first two games and Luke McCaffrey the last two.

“Both of them had a really good week,” Frost said. “We graded everything they did, every snap. Both executed better than they had in practice probably any week this year. We have a decision to make.”

HAWKS ON A ROLL

Iowa has outscored the opposition 125-35 during its three-game winning streak. The Hawks' 41.6-point scoring average is their highest over a three-game stretch since 2002.

Frost said linebacker Collin Miller would be on the sideline after suffering a spinal concussion in last week's game against Illinois. Miller temporarily had some motor weakness, and Frost said it's doubtful Miller would play again this season. He's expected to make a full recovery.

“Collin's been the heart and soul of our team,” Frost said. “He'll be traveling with us to the game and we'll get the leadership from him. I'm just glad he will be OK long term. Those are scary situations and I did a lot of praying for him.”

CAN'T GET OFF THE FIELD

Among Nebraska's biggest defensive problems is getting off the field on third down. The Huskers are 121st out of 127 FBS teams in opponent third-down conversions, at 54%.

“I think the real problem’s on first and second down,” Domann said. “We’re not getting them in third and longs, so that’s probably the biggest issue right there.”

Asked how much joy he gets from beating Nebraska, Iowa defensive lineman Chauncey Golston said, “I get a lot of joy out of beating everyone.”