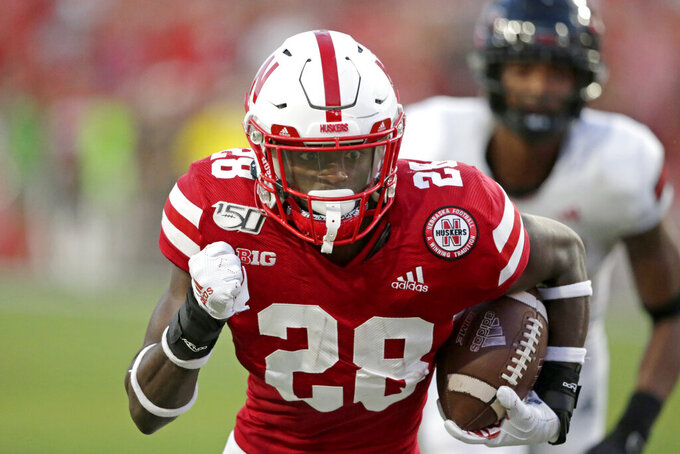 Nebraska running back Maurice Washington (28) runs for a touchdown against Northern Illinois during the first half of an NCAA college football game in Lincoln, Neb., Saturday, Sept. 14, 2019. (AP Photo/Nati Harnik)

LINCOLN, Neb. (AP) — When a Scott Frost offense is at its best, it's moving fast and generating big plays.

Nebraska has scored 12 offensive touchdowns and two field goals through three games, and seven of those 14 possessions featured plays between 30 and 75 yards.

There also have been plays of 60 and 61 yards on series that ended in a missed field goal or turnover.

"Generating big plays, whether it's a run up the middle or a deep pass, helps our offense flow and helps us get into that tempo even more, helps us feel we have the defense on their heels," quarterback Adrian Martinez said Monday. "With that being said, I don't think we need it to have a long drive and score a touchdown. I do think having big plays, chunk plays, help."

The Cornhuskers (2-1), who open Big Ten play Saturday night at Illinois (2-1), lead the Big Ten and are tied for sixth nationally with seven plays of at least 40 yards. Their four plays of 60 or longer is first in the conference and tied for second in the nation behind Oklahoma State's five.

On the flip side, Nebraska has had 15 non-touchdown possessions that failed to net 10 yards, but only three of those came in the 44-8 win over Northern Illinois this past weekend.

"We can still play a lot better on offense," Frost said. "We left some points on the table, we left some plays on the table. I think we were more efficient. We still lack a little bit of execution more often than I would have liked to."

Of the 12 TD drives, four lasted 39 seconds or less and two others took less than 2 minutes.

Not surprisingly, the Huskers' average time of possession of 25 minutes, 44 seconds, is second-to-last in the Big Ten and 122nd nationally.

"We want to be an explosive and fast offense," offensive lineman Matt Farniok said. "What that means is we're going to score fast, so our defense is going to take a little more workload. We're trying to score as fast as possible unless it's an end-of-game situation."

Linebacker and co-captain Mohamed Barry said he takes it as a challenge for the defense to be forced to spend so much time on the field. The defense has held up well, with the exception of the fourth quarter in a 34-31 overtime loss at Colorado.

Nebraska is allowing just 2.18 yards per carry and a respectable 4.74 yards per play even though it has been on the field for 238 snaps — most in the Big Ten and fifth-most in the country. The Huskers also have nine takeaways, most in the conference.

"It doesn't matter how many times we're on the field. We want to be the best defense," Barry said. "That's what we were harping on all summer. We're not just a defense that relies on their offense. We've got so many good players now that we can make that happen."