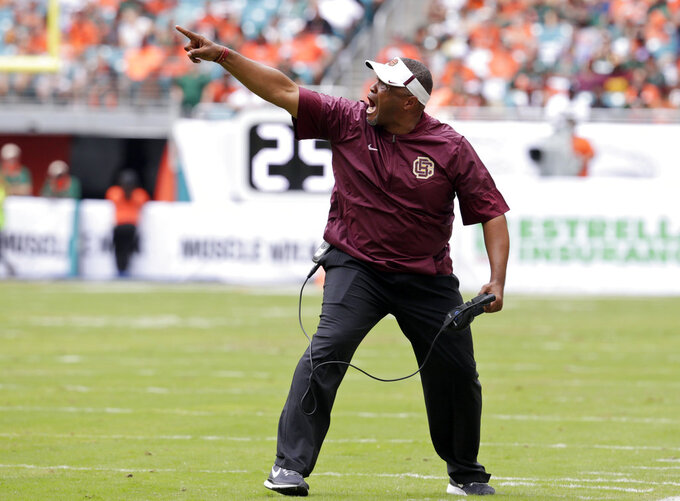 FILE - In this Sept. 2, 2017, file photo, Bethune-Cookman head coach Terry Sims shouts during the first half of an NCAA college football game against Miami in Miami Gardens, Fla. Nebraska will play a Bethune-Cookman team Saturday that’s lost its last five games against Football Bowl Subdivision opponents by an average of 32 points and has come no closer than three touchdowns in any of them. (AP Photo/Lynne Sladky, File)

LINCOLN, Neb. (AP) — Nebraska will play a Bethune-Cookman team Saturday that's lost its last five games against Football Bowl Subdivision opponents by an average of 32 points and has come no closer than three touchdowns in any of them.

The game was scheduled on short notice as a replacement for the canceled opener against Akron, and it comes on what was supposed to be an open date.

Going through the motions wouldn't be advisable for the Cornhuskers, graduate transfer safety Tre Neal said, even though it might be tempting against an opponent that's middle-of-the-pack in its Football Championship Subdivision conference.

The party line in Lincoln this week is the Huskers (1-6) are in no position to overlook anybody , considering it took until last week for them to pick up their first win.

"If you guys go into the game thinking we're just going to walk over them, then we're highly mistaken,' " Neal said of his message to teammates. "They're going to play football just like we are. So we have to go out there and attack just like if we were playing the New York Giants."

Ideally, the Huskers would be able to pull their starters early to avoid possible injuries before next week's trip to Ohio State, which has an open date Saturday. That likely will happen if Nebraska's offense operates as efficiently as it did last week when it amassed a season-high 659 yards in a 53-28 win over Minnesota.

"We're definitely preparing to win a game," Sims said. "We're not for hire. This is not a pay-and-go game. We're not just coming there to collect a check and leave."

Nebraska tentatively planned to reschedule Akron for Dec. 1 after the Sept. 1 opener was canceled because of inclement weather. But coach Scott Frost didn't want to send a message early in the season that he didn't believe his team could make the Big Ten championship game, which is played the same day.

Tight ends coach Sean Beckton contacted Sims and suggested a game, and the athletic administrations took it from there. Beckton had been a longtime high school coach in Florida and was on Frost's staff at UCF, and his brother Stacey used to be on the B-C basketball staff.

The Wildcats are 2-9 all-time against FBS opponents. This will be the second time they've left Florida to play an FBS team; the other was in 2016 against North Texas. Nebraska is 11-0 against the FCS.

NO TABOO AGAINST FBC

Nebraska played an FCS opponent five straight seasons from 2010-14. The Big Ten temporarily barred teams from scheduling opponents from the lower division, but that edict has been rescinded. Nebraska has future games with South Dakota State (2020, 2024) and North Dakota (2022, 2026).

GIVING THEM THE RUNAROUND

Jackson played receiver and defensive back at Florida State before leaving for B-C. The Seminoles originally recruited him as a quarterback.

"There was a guy named Jameis Winston there," Sims said, laughing, "so that didn't turn out too well."