Huskers prep for Ohio St. in 45-9 win over Bethune-Cookman 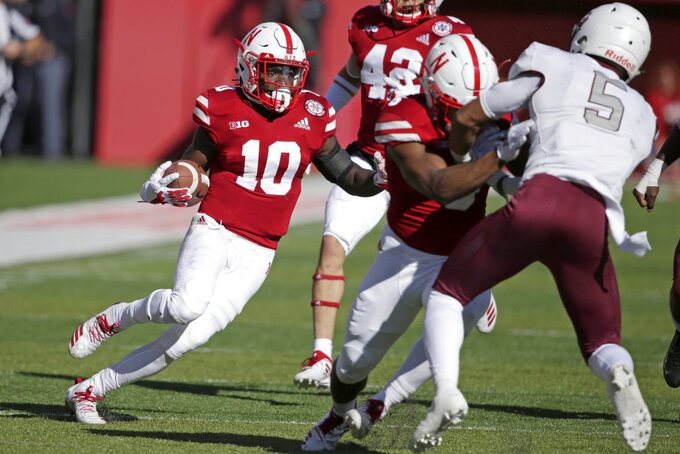 LINCOLN, Neb. (AP) — Nebraska got what it wanted out of its game against Bethune-Cookman. The Cornhuskers won, nobody got hurt, and a lot of guys got to play.

Adrian Martinez passed for 213 yards and two touchdowns and Devine Ozigbo ran for 110 and another score — all in the first half — and Nebraska prepped for next week's road game against Ohio State with a 45-9 win Saturday.

A month ago, Nebraska was in the middle of its 0-6 start and coming off a 46-point loss at Michigan. Last week's win over Minnesota and the fast work they did against the Wildcats of the Football Championship Subdivision have lifted the Huskers' spirits heading into their trip to the "Horseshoe" to face the 11th-ranked Buckeyes, who were off Saturday after losing at Purdue last week.

"I think we're a more disciplined team, a more efficient team right now," coach Scott Frost said. "Hopefully, with the last two wins, it will make us a more confident team. We've got to go on the road to a tough place to play a really good team that's going to be ticked off and has had two weeks of practice since their last game that didn't go well for them. We know what we're in for. We're going to get their best shot."

The Cornhuskers (2-6) scheduled Bethune-Cookman (4-5) a month ago as a replacement for the Sept. 1 opener against Akron that was canceled because of severe weather. The Wildcats earned an $800,000 guarantee.

"I'm appreciative of them for coming, and I think it was great for both teams," Frost said. "It was the type of game we needed. I'm sure the amount of money we're paying for them to come up is something they needed. I think both teams came out of the game really healthy, which is what both coaches wanted. I think it was a win-win for everybody."

Stanley Morgan caught seven passes for 82 yards and two touchdowns and JD Spielman ran back a punt 77 yards for a touchdown and had five receptions for 72 yards.

Nebraska's offensive starters turned the game over to the backups to start the second half. Most of the regulars on defense played the first two B-C possessions of the third quarter. A total of 74 players got on the field for the Huskers.

Bethune-Cookman started David Israel at quarterback in place of Akevious Williams, who left last week's game against North Carolina A&T with a knee injury. Israel was 12 of 27 for 196 yards and two interceptions. Jabari Dunham led the Wildcats' 10-play, 82-yard touchdown drive that Alfred Adams finished with a 5-yard run as time expired.

"We're definitely appreciative of the opportunity to have a chance to come to Nebraska and play in a historic venue such as Memorial Stadium and play a program like Nebraska," B-C coach Terry Sims said. "I don't think we played our best. But the outcome is what it is. We had some guys that left it on the field today, played their hearts out."

Bethune-Cookman: The Wildcats showed some flashes against the Huskers' top defense. Steffon Francois picked up 54 yards on a catch-and-run to set up Uriel Hernandez's 28-yard field goal, and the Wildcats drove to the 8 and 14 against Nebraska's starters on their first two series of the second half but couldn't get into the end zone until the final play against reserves.

Nebraska: Martinez was hammered by Marquis Hendrix and got up slowly on the last of his 41 plays over seven series. Quarterback Noah Vedral, who transferred to Nebraska after backing up McKenzie Milton at Central Florida last year and was declared eligible Oct. 12, played in his first game and ran for a 20-yard touchdown.

Nebraska improved to 12-0 all-time against FCS opponents; Bethune-Cookman dropped to 2-10 against the FBS. ... Spielman's punt return for a touchdown was Nebraska's first since De'Mornay Pierson-El ran one back against Iowa in 2014. ... Ozigbo went over 100 yards for the fourth time in five games. ... Martinez's 1,656 passing yards are a Nebraska freshman record. ... Peyton Newell had the Huskers' first interception by a defensive lineman since 2013.