Hutchinson, on and off field, leads Michigan to CFP semis 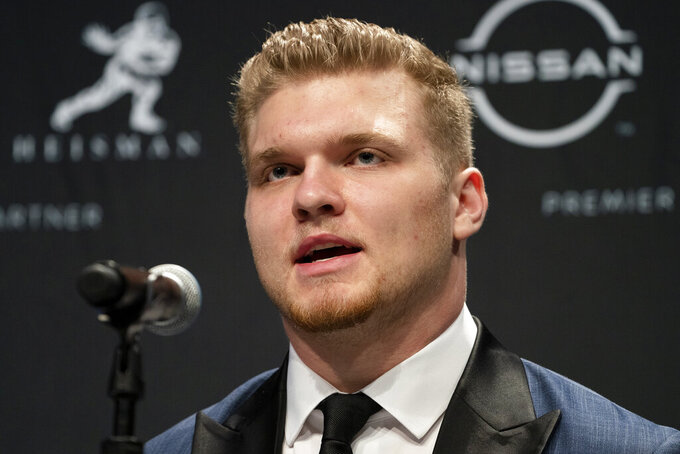 “I’m like, ‘How does my 9-year-old son know about Aidan Hutchinson?’” Smart said, noting that the conversation was taking place even before Michigan (12-1) and Georgia (12-1) were paired up to meet in the College Football Playoff semifinals.

Everyone who follows college football probably knows about Hutchinson, the Wolverines’ standout who got more first-place votes in the Heisman Trophy race than any defensive player had in the last nine years, was a consensus All-American and the MVP of the Big Ten championship.

Next up: Friday night at the Orange Bowl against Georgia for a berth in the national title game.

“When I heard that story, I was laughing,” Hutchinson said of the younger Smart’s fandom. “My dad told me, and we were both laughing about it. It’s crazy that the head coach’s son of the team you’re about to play is a very big fan of yours. It’s a blessing. It’s really cool.”

Hutchinson — whose father, Chris, also was a standout at Michigan — leads the Wolverines with 15½ tackles for a loss and 14 sacks, with the sack total ranking third in the nation this season despite him always being the focal point of an opponent’s blocking scheme. He was second in the Heisman race behind Alabama quarterback Bryce Young, and his 78 first-place votes were the most received by a defensive player since Notre Dame’s Manti Te’o finished second in 2012 with 321 first-place ballots.

“It’s something that I personally love doing because it makes the game so much easier,” Steuber said. “You’re not playing Aidan Hutchinson out there in the games. He’s just such a talented player in everything he does, and it really forces me to focus on my technique and try to give my best every single day playing against him. I know I give him my best every day, and so it’s truly something that I look forward to every day. Sometimes the practice tape is pretty rough on my end, but I know it’s getting me better and it’s getting him better, so that’s all that matters.”

That’s just one of the ways Hutchinson has been invaluable to the Wolverines. He makes teammates better.

Consider David Ojabo, who entered this season with one career tackle — a third-quarter tackle in a loss at Indiana last November. And now, he’s widely considered someone with first-round potential for the 2022 NFL draft, in large part because he told Hutchinson during the offseason that he wanted to do everything he was doing — and how he was doing it.

“At the end of the day, I have the tools and the physical traits, but it’s the work ethic and the grind, and just knowing that you’re not going to fall from the sky and become a top-round pick,” Ojabo said. “You’ve got to grind.”

Hutchinson showed him the grind. Ojabo’s numbers have exploded since.

“Every day in that offseason he was right with me that whole time,” Hutchinson said. “He committed to it every day. Even in the days that it was very difficult. He was grinding his (butt) off this whole offseason, so all the awards and accolades that he’s getting right now, he completely deserves.”

Same goes for Hutchinson, of course.

He’s responsible for one of the viral plays in college football this season, the one where he pointed at the Ohio State offensive line and wound up rolling over Buckeyes lineman Thayer Munford — a very good player — late in the fourth quarter of the Wolverines’ long-awaited win over their biggest rival.

And now, they’ve got a chance to reach the national title game.

“We’re a very talented defense,” Hutchinson said. “We’ve got a lot of good players. If we go out there and just do our job, I think we can have a lot of success.”