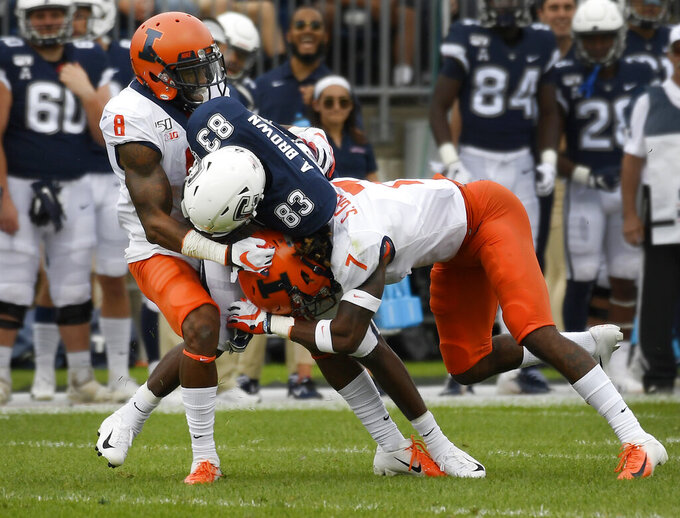 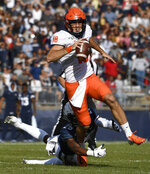 It was the first nonconference road win for Illinois (2-0) in a dozen years.

"Whenever you can eliminate a bad streak like that, it's a positive thing," said coach Lovie Smith. "We're going to be a good football team this year. Hopefully, there will be more of those."

Jakari Norwood had 62 yards to lead a rushing attack that accounted for 130 yards.

Jack Zergiotis, making his first start in place of an injured Michael Beaudry, completed 21 of 31 passes for 275 yards for the Huskies (1-1).

Beaudry was available, if needed, but coach Randy Edsall said there will be no quarterback controversy. Zergiotis, a true freshman, has won the starting job.

UConn, a three touchdown underdog, jumped out to an early lead when defensive back Tyler Coyle stepped in front of a Peters pass in the first quarter and returned it down the left sideline 52 yards. Clayton Harris added two of his three field goals in the first half.

But Ra'Von Bonner got the Illini rolling, taking a screen pass and weaving 28 yards down the right side for a score. That was the first of three second quarter touchdown passes for Peters, the Michigan transfer. The Illini put up 24 unanswered points, closing the half with a 53-yard field goal from James McCourt that was set up by a 29-yard interception return from Michael Marchese.

Illinois fumbled its first handoff after a 68-yard second half kickoff return from Dre Brown and UConn drove 59 yards, getting back in the game when Kevin Mensah dove into the end zone from 2 yards out.

But Southern Cal transfer Josh Imatorbhebhe capped an 87-yard drive with his second touchdown catch of the game to put Illinois on top 31-20 and an interception by Dele Harding stopped a late UConn drive to preserve the win.

"Good football teams are going to have to fight through adversity," Smith said. "It's really tough when you're on the road and you get in a hole the way we did. But we fought back through it."

Illinois junior running back Mike Epstein suffered a season-ending knee injury against Akron and his main backup, Reggie Corbin, also was injured and could not go Saturday, despite warming up. That left Norwood, Brown and Bonner to share the load.

"We were kind of thrown right in the fire," said Brown, who had 33 yards rushing and returned five kickoffs for 163 yards. "We're excited to get Reggie back to get the whole crew back together. We really balance each other really well."

Defensive end Oluwole Betiku, another Southern Cal transfer, was in the UConn backfield much of the game, recording 3½ sacks. He had six tackles, three for losses and 1½ sacks in the Illini's opening win over Akron.

"It's a heck of start and he hasn't played a lot of ball," Smith said. "He can take another step, I really believe that."

Zergiotis said he expected to be nervous, but the butterflies went away a couple hours before the game.

"Thankfully they did go away and we performed at a level that was fine," he said. "But, we want to improve."

Illinois: Illinois' last win on the road outside the Big Ten came in 2007 at Syracuse. The only other regular season nonconference road win this century was in 2001, at California.

UConn: Despite the respectable showing, the Huskies have now lost 17 straight games to FBS opponents. Their last win against the Bowl Subdivision came on Oct. 21, 2017 against Tulsa.

Illinois: The Illini return home to take on Eastern Michigan next Saturday

UConn: The Huskies have an early bye week before facing another Big Ten opponent, traveling to Indiana for a game on Sept. 21.