Illinois, Maryland matchup could come down to ground game 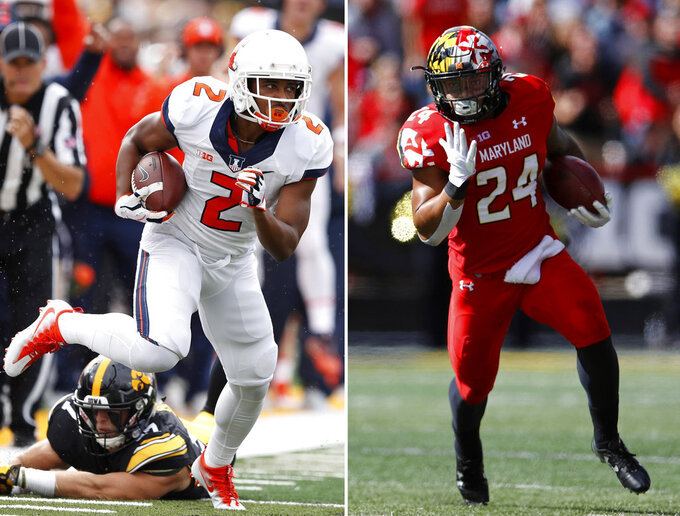 FILE - At left, in an Oct. 7, 2017, file photo, Illinois running back Reggie Corbin (2) runs from Iowa defensive back Brandon Snyder during the first half of an NCAA college football game, in Iowa City, Iowa. At right, in an Oct. 13, 2018, file photo, Maryland running back Ty Johnson rushes the ball in the first half of an NCAA college football game against Rutgers, in College Park, Md. When Illinois and Maryland meet on the football field for the first time Saturday, they will find the similarities in the teams run deep _ with emphasis on the word “run.” Led by junior Reggie Corbin, who averages 7.89 yards per carry, Illinois ranks third in the Big Ten with an average of 226.1 yards rushing per game. Maryland, behind the versatile Ty Johnson, is one notch back with 219.9.(AP Photo/File)

COLLEGE PARK, Md. (AP) — When Illinois and Maryland meet on the football field for the first time Saturday, they will find the similarities in the teams run deep — with emphasis on the word "run."

Led by junior Reggie Corbin, who averages 7.89 yards per carry, Illinois ranks third in the Big Ten with an average of 226.1 yards rushing per game. Maryland, behind the versatile Ty Johnson, is one notch back with 219.9.

Both teams use two quarterbacks, but neither the Fighting Illini (3-4, 1-3) nor Maryland (4-3, 2-2) have found success through the air. Illinois freshman M.J. Rivers and senior transfer AJ Bush have combined for four touchdown passes and five interceptions; Maryland, employing Kasim Hill and Tyrrell Pigrome, ranks last in the conference with 110 yards passing per game — including 47 last week in a 23-0 loss to Iowa.

So, the first priority for the Illinois defense is obvious.

"You have to be able to go in and stop the run and make a team one-dimensional," coach Lovie Smith said.

Although the Fighting Illini yielded a total of 95 points in their last two games, losses to Purdue and Wisconsin, they lead the Big Ten with an average of 2.14 forced turnovers per game. Maryland, similarly, has used the turnover to its advantage, leading the Big Ten with a plus-8 differential.

And here's one more common thread between the teams: Tre Watson, a star linebacker who played three years at Illinois before transferring to Maryland. Watson leads the Terps with 75 tackles and has four interceptions, tied with teammate Darnell Savage for second-most in the country.

"Tre Watson is a good football player, he's smart, he knows the game," Smith said. "We know what we're going to see from him, and that is good play."

Some other things to know about the Illinois-Maryland matchup:

The University System of Maryland board of regents appears close to making a decision concerning the status of coach DJ Durkin, who has been on administrative leave since August while an independent commission sought to determine the culture of the football program.

The board has received that report, and is considering a subsequent course of action. Canada, the team's offensive coordinator and Durkin's replacement, insists that won't be a distraction to his players.

"We're not going to tell them what to read," Canada said. "I think they've done a better job than anybody else of sticking together and focusing on what they're doing."

Illinois has forced a turnover in 21 straight games, the longest active streak among Power 5 conference teams. But the bulk of those takeaways have come on interceptions (13), compared to only two fumble recoveries.

Smith hopes his defense bolsters the latter category on Saturday.

"We'd like to cause more fumbles, take the ball away that way," Smith said. "We practice it, so the emphasis is on it. This is a team that loves to run, (uses) get in to a lot of different ways to run the football, and we're going to have opportunities."

Johnson was limited to 59 all-purpose yards against Iowa but still moved into third place on the school career list with 4,140 yards.

Johnson leads the Big Ten in kickoff return yards, boosted by a 98-yarder for a TD against Michigan.

The Fighting Illini are fired up for their trip to Maryland, the only Big Ten team the Terps haven't faced since joining the conference in 2014.

"I like for our team to get a chance to play in different places, another part of the country," Smith said. "We're excited about going up there and playing."

It's the second journey the eastern part of the country this month for Illinois, which visited Rutgers in New Jersey on Oct. 6.