Indian casinos across US wary of betting on sports books 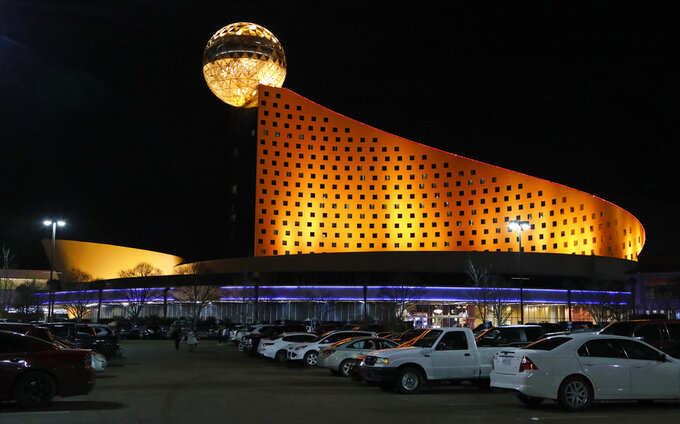 In this Dec. 18, 2018 photo, the Golden Moon Hotel and Casino, part of the Pearl River Resort is lit in Philadelphia, Miss. The sports book owned by the Mississippi Band of Choctaw Indians is the first to open on tribal lands outside of Nevada following a U.S. Supreme Court ruling earlier this year, a no-brainer business decision given the sports fans among its gambling clientele. (AP Photo/Rogelio V. Solis) 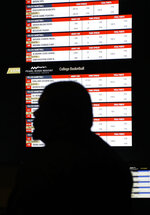 LAS VEGAS (AP) — Two dozen large-screen TVs showing football and other sports line the walls. There's beer on tap, bar top seating and leather chairs. Chicken wings are on the menu. And at this American Indian casino in the heart of college-football mad Mississippi, you can legally bet on the games.

The sports book owned by the Mississippi Band of Choctaw Indians is the first to open on tribal lands outside of Nevada following a U.S. Supreme Court ruling earlier this year, a no-brainer business decision given the sports fans among its gambling clientele.

"We are basically two hours from Tuscaloosa, Alabama, and then, we are just an hour from Mississippi State. We have Ole Miss just to the north of that, and we have Southern Miss — they're not SEC, but they are a player. We are not that far from Louisiana," said Neal Atkinson, the tribe's director of gaming.

The book at Pearl River Resort is packed every college football Saturday, but remains an outlier months after the high court opened the door for expanded sports gambling across the United States by striking down a federal ban.

Tribes enthusiastically welcomed the decision in May but since then, the regulatory challenges and low-margin nature of the business have sunk in. Few Indian casinos have an enviable location like the Choctaw and many need state approval to add sports betting to their offerings.

Indian casinos started small three decades ago, but they have grown to be an annual $32.4 billion segment of the U.S. gambling industry. The roughly 475 casinos operated by nearly 240 tribes create jobs for tribal members and profits that help pay a variety of services, including health care and housing.

Some casinos only have games like bingo or pull tabs that don't need state approval. But the majority of them also have state-authorized slot machines, blackjack and other table games, according to the National Indian Gaming Commission.

Many tribes share a portion of casino profits with state governments in exchange for exclusive rights to conduct gambling operations within their states.

To offer sports betting, the majority of tribes would have to renegotiate compacts that vary widely in cycles and the issues covered, though some tribes believe their existing agreements already give them the right to offer the new wagers.

"There's a broad spectrum in Indian Country covering two extremes: Tribal nations that would not benefit at all, and on the other end, tribal nations that would significantly benefit," commission chairman Jonodev Osceola Chaudhuri said. "Those are largely business decisions that each tribe will have to make given its own economic landscape and its unique market realities."

Some federal lawmakers have also proposed regulating sports gambling more widely, adding yet another layer to a complex debate already involving commercial casinos and lotteries, plus sports leagues themselves.

So far, only the Santa Ana Pueblo near Albuquerque, New Mexico, has followed the Choctaw's effort into sports gambling. Neither tribe was required to obtain additional state approvals.

Contrary to popular belief, sports betting is a low-profit business that requires highly skilled employees. In Nevada, sportsbooks last year contributed only 2.4 percent of the gambling revenue of casinos statewide — dwarfed by the proceeds from table games and slots. The limited payoff has tribal casinos balancing the allure of a Las Vegas-style amenity with the risks of opening compacts for negotiations.

"Tribal leadership is extremely protective of what they have because it's meant so much to us, and there's always a risk of upsetting the apple cart," Washington State Gambling Commission member Chris Stearns said. "Is this going to help us? Is this going to hurt us? That's really at the heart of why you see Indian tribes gently venturing into sports betting. ... In a lot of states, tribes write a check out to the state in exchange for exclusivity. So, any time there's a new gambling product, and you ask the state to authorize it, there is a risk the state will say 'Sure, but it is going to cost you.'"

The only sports book in New Mexico, inside the Santa Ana Star Casino Hotel, began taking wagers in October. It offers bets on professional and college sports, but not for games involving two public in-state universities.

In Washington state, all casinos are tribally operated. Changing the state's laws to allow betting on sports would require a 60 percent supermajority vote in the legislature or a ballot initiative. Only then could sports betting be added to a tribal-state compact.

In California, where tribes have exclusivity on casino-style gambling, voters would have to approve a change to the state constitution.

Casinos are operated on and off reservations in South Dakota. Before the Flandreau Santee Sioux Tribe can try to to edge out its nearest competition across the state line in Iowa, South Dakota's constitution will have to be amended through a public vote.

The legislature could choose to put the question before voters or supporters could gather enough signatures to add the measure to the 2020 ballot. If the measure passes, it would open the opportunity for tribes to negotiate their compacts with the state.

"Normally, with the brick-and-mortar casino like we have, we attract a lot of older crowds and retired people," Weston said. "I think with sports betting we can bring a different age demographic and different people ... and have the opportunity to do the same that they do in Vegas."