Indiana tries to put season on track against No. 5 Ohio St 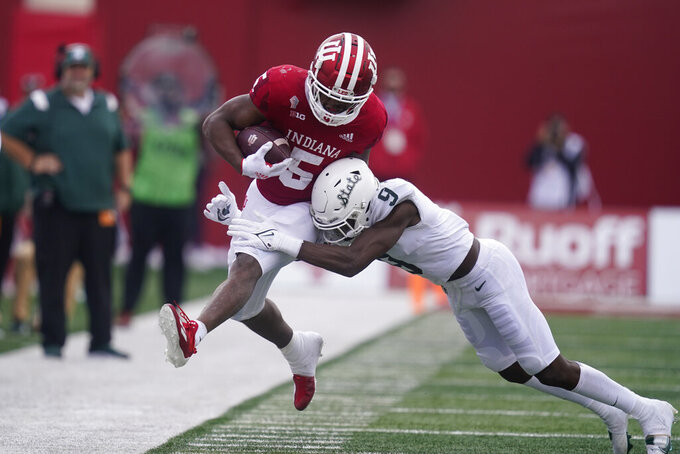 Indiana spent the last year pointing to this week's Ohio State game as a measuring stick.

The Hoosiers thought a win over the fifth-ranked Buckeyes would finally cement the program's steady ascension and might even lead to a Big Ten championship game appearance.

Instead, after six games, they're entering Saturday's showdown with four losses and hopes of achieving a more modest milestone — ending the nation's longest active losing streak against one team.

“We’re swinging hard," Hoosiers coach Tom Allen said. “Yeah, it’s a bit hard, there’s no doubt about it. Not what any of us expected or wanted. What are you going to do? That’s where you keep on swinging."

The Hoosiers certainly have taken some big blows this season.

All four losses came against teams currently ranked in the top 11 and they still have two more on the card, Saturday against the surging Buckeyes and Nov. 6 at No. 6 Michigan.

The Hoosiers need to win four of their final six to become bowl eligible, leaving no margin for error and they may have to do it without starting quarterback Michael Penix Jr., who is out with an injury to his throwing shoulder. Indiana's secondary has been hit hard by injuries and the high-scoring offense from last season has just one TD against conference foes.

No, it's not how Indiana anticipated this eagerly-awaited season going after it nearly pulled a major upset in Columbus last year.

And after four straight victories, the Buckeyes seem primed to extend their winning streak. Indiana has lost 26 in a row since a tie since a tie in 1990, though the Buckeyes did vacate their 2010 victory because of NCAA sanctions.

Still, coach Ryan Day knows the Hoosiers will be ready to make a statement.

“We've got to go on the road, it’s a night game there and they’ll have a good atmosphere, kind of like the last times we played on the road with a conference game," Day said. “We’re going to get their best shot."

And the Hoosiers aren't about to give in, either.

“We’ve got to be able to play our best football," Allen said. “We’re going to do everything within our power against a team that is very, very talented, has a lot of really good football players, and is very well-coached."

Freshman quarterback C.J. Stroud threw for 406 yards and five TDs as the Buckeyes scored 66 points in a victory over Maryland before taking their bye, and the Buckeyes have won their last four by an average of 40 points.

That's a dramatically different look from Week 2 when the offense and defense both struggled in 35-28 loss to Oregon.

“I think we’re in a lot better place than we were at the beginning of the season,” Day said. “We got some rest, so now it’s going be a big run."

Peyton Hendershot, one of Indiana's captains, is on the verge of becoming the most prolific tight end in Hoosiers history and he could set two school records in front of Indiana's second sellout crowd this season.

Ohio State running back TreVeyon Henderson has been one of the nation's most explosive rushers though his stats the last few weeks were hardly gaudy — largely because he sat out most or all of the second halves in the blowouts.

“I think part of that is just the way the games have been shaking in the last couple of weeks,” Day said. “It’s a long season. We’re trying to gradually build, but I think he’s in a pretty good place as we head into these last six games.”