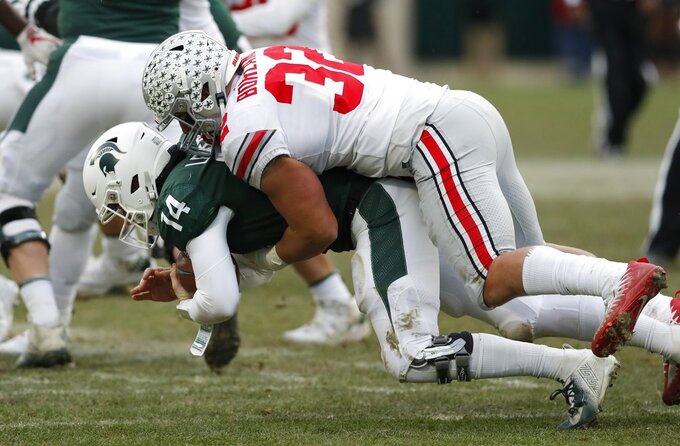 EAST LANSING, Mich. (AP) — Mark Dantonio often shies away from talking about injuries. This year, the topic is unavoidable.

The question is whether Michigan State's offensive woes can be blamed mostly on poor health — or if there are deeper problems the Spartans need to resolve.

After a 26-6 loss to Ohio State last weekend, Michigan State is 13th in the Big Ten in total offense. It's been a disappointing showing for a unit that returned almost every starter from a year ago, and as the Spartans wrap up a fairly pedestrian season, Dantonio faces the tricky task of evaluating an offense that has been a weak link but is nowhere near full strength.

Michigan State (6-4) expected a lot from quarterback Brian Lewerke this year, but he has dealt with a shoulder injury and has been splitting time lately with backup Rocky Lombardi. Running back LJ Scott hurt an ankle and is now redshirting .

Felton Davis was lost for the year with an Achilles tendon injury, and fellow receivers Cody White, Darrell Stewart and Jalen Nailor have missed time, too. The offensive line has also been weakened by injuries.

The problem for Michigan State — looking ahead to next year — is that it's hard to tell how much the injuries are holding the Spartans back. There's some evidence that the offense has been in decline for a while. Michigan State averaged 43 points a game and finished second in the Big Ten in total offense in 2014, but the Spartans haven't been close to that level since.

In the three seasons following that 2014 campaign, Michigan State was sixth, sixth and eighth in the league in total offense. The Spartans have dropped even further this year.

Michigan State has been particularly bad on third down this season. The Spartans have converted just 30 percent of the time, one of the worst marks in the FBS.

"We just haven't been able to get the completions we needed, and we've been in some tough situations, especially some tough field position," tight end Matt Sokol said. "Just comes down to execution, and all of us just coming together."

But as the offense sputters, Warner in particular is under scrutiny. Right now, the Spartans are still hoping to win their last two regular-season games and go to the best bowl they can, but the offseason isn't far off. That's when Dantonio will show — through his words and actions — how much of Michigan State's struggles he felt could have been avoided.

"We've lost four football games. I feel like we've had a chance to win every one of those. So it's more than just about injuries that we didn't win those games," Dantonio said. "It's coaching decisions, it's head coaching decisions, it's players that are playing, you know, breakdowns or the ability to execute. It's the execution of the people we're playing against, that they do a good job. So, so many things you look at there. We're going to keep getting better and keep pushing."