Interior strength of Hawkeyes to give Gophers another test 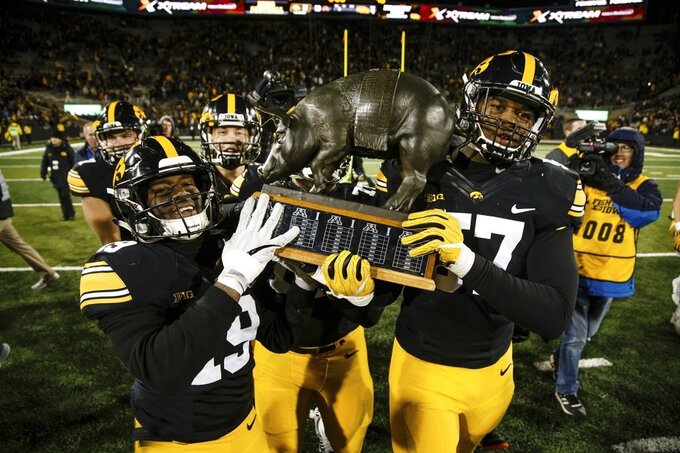 FILE - In this Oct. 28, 2017, file photo, Iowa's Miles Taylor (19) and Iowa's Chauncey Golston (57) carry the Floyd of Rosedale trophy off the field after Iowa defeated Minnesota 17-10 during an NCAA college football game, in Iowa City. The Floyd of Rosedale trophy, introduced in 1935, is awarded to the winner of the Iowa-Minnesota football rivalry. Iowa plays at Minnesota on Saturday, Oct. 6, 2018. (Brian Powers/The Des Moines Register via AP, File)

MINNEAPOLIS (AP) — Much of the success Iowa has had over time can be pinned on superior strength at the line of scrimmage , with 28 offensive or defensive linemen drafted by NFL teams since coach Kirk Ferentz took over for the 1999 season.

This point-of-attack prowess has been on full display by the Hawkeyes again this fall, another reminder this week to their border-state rival to the north about the positive effect on building a consistently winning Big Ten program.

There's a lot of work left to be done at Minnesota, as evidenced by the conference opener at Maryland.

"You recruit speed, but you don't really develop strength until they get here, grown-man strength," Gophers coach P.J. Fleck said.

Eight of the 11 starters currently on Minnesota's offense are sophomores or freshmen, and the Gophers showed their ages and weaknesses on Sept. 22 during a 42-13 defeat by the Terrapins. They netted only 94 rushing yards on 40 attempts, including the four sacks taken by quarterback Zack Annexstad that lost 34 yards.

Though the front seven on the other side of the ball has more experience, the foot injury that knocked star safety Antoine Winfield Jr. out of that game significantly diminished the defense. Maryland rushed 37 times for 315 yards, simply overpowering the Gophers (3-1, 0-1) almost every time they handed the ball off.

The Gophers will give those muscles another stiff test on Saturday when the Hawkeyes (3-1, 0-1) visit TCF Bank Stadium in their homecoming game and the annual battle for the Floyd of Rosedale bronze pig trophy.

Their defense will face a Hawkeyes offensive line that has allowed four sacks, fewest in the conference. The offense will try to re-establish a rushing attack, as challenging as that might be with senior tailback Rodney Smith out for the rest of the year with a knee injury.

"Iowa is going to do what they do, and we have to do what we do, better," Gophers center Jared Weyler said. "We run the ball a lot. We've got to establish a physical presence, for sure."

"They say a tough quarterback means you're going to have a tough team," Weyler said. "So he's extremely tough."

Tight ends have been another source of pride for the Hawkeyes under Ferentz, with nine of their 66 NFL draftees coming from that position since his first season in 1999. Noah Fant is the latest standout, with four of his 16 career touchdown catches coming this year. Two of them were against Wisconsin on Sept. 22, before Iowa's week off.

"There's been a lot written about Noah, rightfully so," Ferentz said. "Noah's a very talented player."

Ivory Kelly-Martin returned to Iowa's backfield with 14 carries for 72 yards in a 28-17 loss to the Badgers , after missing two games with an ankle injury while Toren Young took the lead and Mekhi Sargent took some turns. Kelly-Martin has the most experience of the three sophomores.

This will be the 112th edition of the rivalry, dating to the first matchup in 1891. The Floyd of Rosedale trophy was first awarded in 1935, spawned by a bet between the governors of the two states. The Hawkeyes, who will start a stretch of four out of five games on the road, are 13-4 in the last 17 meetings.