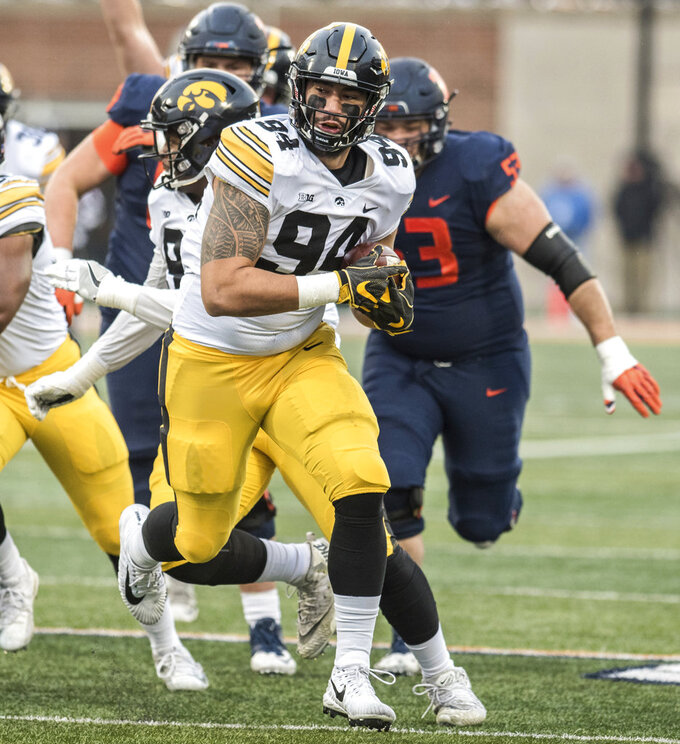 Iowa's A.J. Epenesa (94) runs the ball into the end zone after recovering a fumble in the first half of a NCAA college football game against Illinois, Saturday, Nov. 17, 2018, in Champaign, Ill. (AP Photo/Holly Hart) 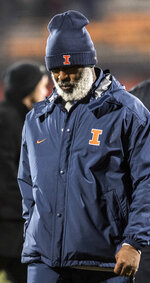 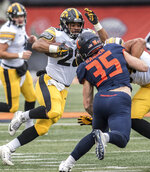 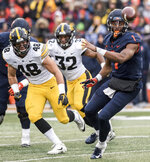 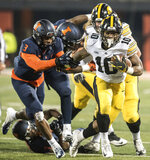 It tied the largest margin of defeat in Illinois history, matching a 63-0 loss to the University of Chicago in 1906.

The win ended a three-game skid for the Hawkeyes (7-4, 4-4 Big Ten) and makes a bowl invitation all but certain.

Iowa quarterback Nate Stanley threw an interception on the second play of the game and the Hawkeyes punted on the next series. But the floodgates soon opened: Over the next 18 minutes, Iowa scored five times.

"A lot of man coverage today, a lot of zone a week ago," Iowa coach Kirk Ferentz said. "A lot of that stuff is just how things shake out, but again, we're going to be a better team any time we get our better guys involved."

"We didn't play well in any phase," said Illinois coach Lovie Smith. "Starting with coaching, we thought we had the team prepared. We weren't. They outperformed us in every way."

Stanley was 13 of 21 through the air for three touchdowns and one interception. His touchdown passes went to tight end Noah Fant (who played sparingly last week much to the chagrin of many Iowa fans) and T.J. Hockenson.

"I don't know if there were any major conversations, but we're a better team, obviously, when our tight ends are involved," Ferentz said. "Noah (Fant) had a good week. The plan worked out well today and it was good to see him involved and helping our team move the ball. It was a really productive day for him."

Sargent carried 17 times for 121 yards, while Young rushed for 67 yards on 14 carries. Kyle Groeneweg returned a punt for a touchdown following Illinois's first series of the second half.

AJ Bush was 12 of 28 for 82 yards and two interceptions for Illinois. Ra'Von Bonner carried the ball 21 times for 111 yards.

Illinois' top rusher. Reggie Corbin, left last week's game with an ankle injury and appeared to re-injure it in the first half. He carried the ball once prior to leaving Saturday's for minus 4 yards.

Iowa generated 400 yards of total offense, compared to 231 for Illinois.

"We're not a good football team right now," Smith said. "There are some scars that will stay with you."

Iowa was able pretty much to do as they pleased. And what pleased them seemingly was scoring touchdowns.

Illinois was never in the same stadium with Iowa, let alone the same game. Moribund defense and an ineffective offense kept Illinois out of the game from the opening play.

Iowa: Closes out the regular season by hosting Nebraska on Friday.

Illinois: Ends its season at Northwestern next Saturday.