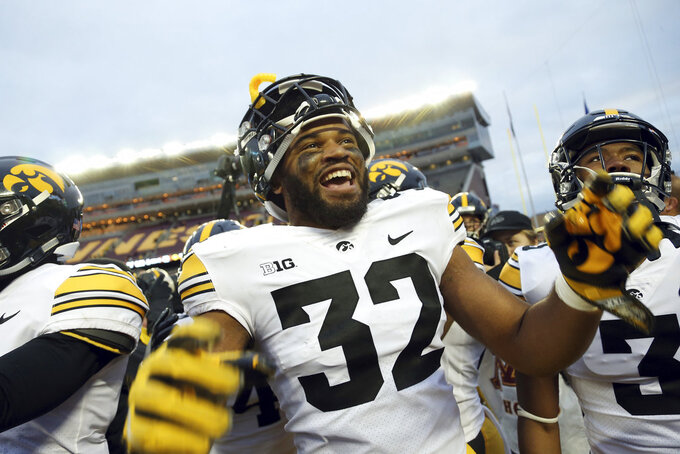 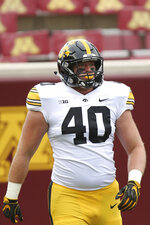 The Hawkeyes might need some more help from their offense on Saturday at Indiana — like they got in last weekend's 48-point explosion at Minnesota — to bolster a unit that sudden looks a lot thinner.

Iowa (4-1, 1-1 Big Ten) will likely be without middle linebacker and leading tackler Jack Hockaday (knee injury) on Saturday. Coach Kirk Ferentz said Tuesday the availability of star tight end Noah Fant and running back Ivory Kelly-Martin were also unknown after they were knocked out of the game late against the Gophers.

Hockaday's backup, Amani Jones, will miss the first half on Saturday after being ejected for targeting against the Gophers, and outside linebacker Nick Niemann will miss his second game in a row with a knee strain.

Though true freshmen Julius Brents and Riley Moss are listed as their starting cornerbacks for the second straight week, Ferentz said both Michael Ojemudia and Matt Hankins are expected to be ready for the Hoosiers (4-2, 1-1).

"We asked of a lot of our players last week that haven't played a lot to step up and give us a good effort," Ferentz said. "They did that. We're going to need more of that this weekend I'm sure and in the weeks ahead."

The Hawkeyes have scuffled at times on offense in part because they're averaging just 3.8 yards a carry.

But Iowa might have finally found something in the passing game against the Gophers.

Junior Nate Stanley threw for 314 yards and a season-high four touchdowns to four different receivers at Minnesota; tight ends Fant and T.J. Hockenson and receivers Ihmir Smith-Marsette and Nick Easley. Brandon Smith, arguably Iowa's most physically gifted receiver, caught five passes on five targets for 68 yards, including a remarkable grab off a defender's helmet in the fourth quarter. Ferentz called it his best game with Iowa.

It's been a long time since Iowa has had a player with Smith's skill set, and its offense would look a lot more potent if the 6-foot-3 sophomore reaches his potential.

Smith's presence would be even more crucial if Fant can't go.

"Brandon makes tremendous plays. That's not anything new to us," Smith-Marsette said. "But it's something new to y'all because y'all don't see it every day. We know Brandon can make those types of plays."

Brents and Moss became the first pair of true freshman defensive backs to start for Iowa since Benny Sapp and Bob Sanders in 2000. The Gophers targeted both of them as expected, and though Minnesota's Zach Annexstad threw three TD passes he also threw three picks to Iowa's freshman corners.

Moss had two of them, earning Big Ten freshman of the week honors.

"Riley and Julius were both kind of thrown in the mix there, and I thought they came out and played well," safety Jake Gervase said. "There were times where they made some mistakes and faced some adversity, but they handled that well and finished the game strong."

Iowa will also likely start its fifth different linebacker combination in six games, with newcomer Barrington Wade expected to step in on Saturday. But the Hawkeyes might be able to survive its current tumult in its back seven because its defensive line has stuffed opponents like few teams in America.

Matt Nelson was the hero a week ago, racking up three sacks to grab the Big Ten lead with five.

"It takes the pressure off," safety Amani Hooker said of the line. "Every week they show up and do what they're supposed to do."