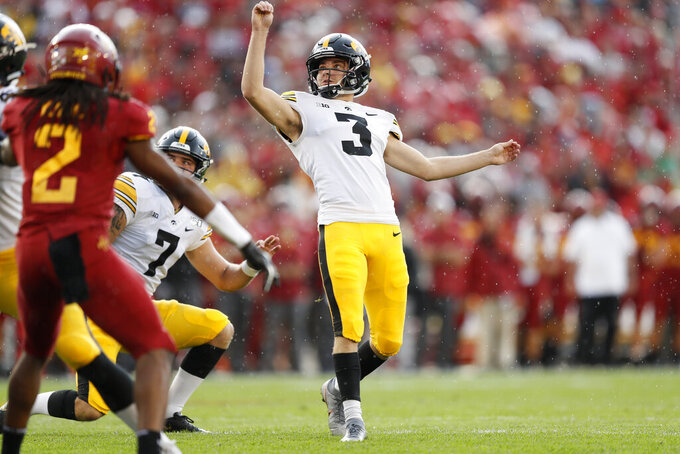 FILE - In this Sept. 14, 2019, file photo, Iowa kicker Keith Duncan (3) kicks a field goal during the first half of an NCAA college football game against Iowa State, in Ames, Iowa. Duncan was a freshman hero _ only to lose his job for two full seasons. He's re-emerged as a key cog for the 14th-ranked Hawkeyes in 2019. (AP Photo/Charlie Neibergall, File)

Duncan then all but disappeared for the next two seasons. Instead of bailing on Iowa for a new opportunity, Duncan viewed that time as an opportunity to earn the starting job back.

The results have been spot on so far.

Duncan, powered by a new faith-based motto of "Kicking Free," has emerged as one of the nation's best kickers this season. Duncan has made all of his eight field goal attempts through three games, tied for second-most by a kicker who has yet to miss one.

"What a great moment, if nothing else had happened in his career," Iowa coach Kirk Ferentz said of Duncan's kick against Michigan. "Fortunately, he was motivated to push it further."

Duncan has also made all eight of his extra-point tries, and he has become so at ease in his pressure-packed role that he and holder Colten Rastetter play "Rock, Paper, Scissors" after each make.

Duncan had a breakout performance at Iowa State on Sept. 14.

The Hawkeyes had to deal with two weather delays that lasted 2:55 and left the Cyclones' grass field completely soaked. Iowa was also dealing with heavy winds and a standout Iowa State defense that kept the Hawkeyes out of the end zone all but once.

Duncan bailed Iowa out with field goals of 25, 40, 42 and 39 yards. Those 12 points proved to be the difference in an 18-17 Iowa win, the closest ever finish between the instate rivals.

"I'm going out there and I'm trying to find a spot for him and I'm like 'Man, hopefully Keith makes this' because the field was horrendous," Rastetter said. "He came in clutch."

Duncan and the 14th-ranked Hawkeyes (3-0, 1-0) will look to stay perfect when they host Middle Tennessee State (1-2) on Saturday.

"It was very humbling," Duncan said. "It was a great learning experience sitting on the bench for those two years. I got to learn different techniques, different mindsets and also different routines. And seeing the game from the sidelines also helped my mindset a lot."

As a true freshman, Duncan beat out Miguel Recinos in a razor-thin competition. But Iowa's coaches were reticent to cast aside Recinos, who had the bigger leg, and as that season wound down it appeared as though Duncan would be relegated to chip shots and extra points.

Recinos shanked a 46-yarder against in that game against Michigan, though, and Duncan came up with a kick that knocked Michigan from the ranks of the unbeaten.

Recinos took such a stranglehold of the job in the offseason ahead of 2017 that Iowa redshirted Duncan. Last year, Duncan was active but never saw the field.

Like many kickers, Duncan was forced to tinker with his game largely on his own. So Duncan studied himself meticulously on a video scouting app that Iowa provides players for their iPads and phones, and he discovered that his technique was holding him back.

Duncan said his leg swing was more like the up-and-down movement of a pendulum. Changing to a more power-based approach, one that Duncan compares to the motion of Nike's "Swoosh," would give him the power he need.

Duncan also credits his faith for allowing him to play freer and with more perspective.

"You learn to love the process," Duncan said. "Having all those things click all of a sudden, it's like a chain reaction."