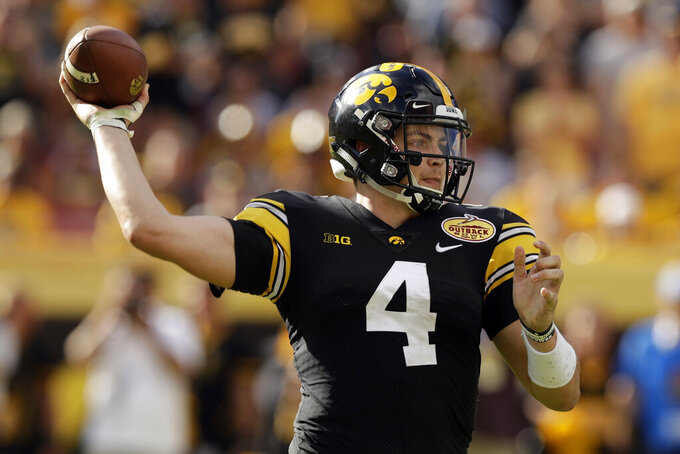 FILE - In this Jan. 1, 2019, file photo, Iowa quarterback Nate Stanley throws a pass against Mississippi State during the second half of the Outback Bowl NCAA college football game Tuesday,, in Tampa, Fla. Stanley threw for 52 touchdowns in his first two seasons as a starter, the most in school history, and he’s just 23 more scores away from passing Heisman Trophy runner-up Chuck Long for the No. 1 spot. And while Stanley has over 5,000 fewer yards passing than Long did, he’s within striking distance of Drew Tate for second on that list. (AP Photo/Chris O'Meara, File)

IOWA CITY, Iowa (AP) — Iowa's Nate Stanley will enter his senior season with a chance at becoming one of the greatest quarterbacks in school history.

Stanley is content to focus on winning and letting his legacy take care of itself.

Stanley threw for 52 touchdowns in his first two seasons as a starter, the best two-year stretch for a Hawkeye, and he's just 23 TD passes away from passing Heisman Trophy runner-up Chuck Long for the top spot. Stanley is also within striking distance of Drew Tate for second in career passing yards — all with a 3.25-to-1 touchdown-to-interception ratio that's only been topped by another Heisman finalist, Brad Banks.

Stanley will make his 27th straight start on Saturday when the 20th-ranked Hawkeyes host Miami (Ohio).

"I just want to win...whether that means we run for 400 yards or pass for 400 yards, I don't really care," Stanley said. "The job of the quarterback is to help the team win. No matter how that happens, a win is a win."

Stanley has done plenty of that, winning 17 games while tossing five TDs in wins over Ohio State and Iowa State along with a six-touchdown effort in last year's win at Minnesota.

Still, Stanley has been viewed more as a solid starter than a star despite a sturdy 6-foot-4, 245-pound frame, a potent arm and the ability to both take hits in the pocket and improvise when necessary. Part of that is because Stanley's accuracy can waver, to the point where he has yet to complete over 60% of his passes in a season.

One area that the soft-spoken Stanley focused on improving this offseason is his communication, especially in making sure his tight ends and receivers are running their routes the way Stanley wants them run.

Stanley's teammates have taken notice of the welcome change.

"I remember coming in with Nate as freshmen, and Nate was a quiet guy. He didn't talk too much. But now you see that confidence. You see him talking a lot more," junior running back Toren Young said. "And just the way he plays. He's just poised, and he makes plays.

If Stanley is to become Iowa's all-time leader in touchdown passes, he'll have to do so with a much different attack than he's been used to.

Stanley had the benefit of playing with tight ends Noah Fant and T.J. Hockenson in his first two seasons. But they left early and became the first duo from the same school to be picked in the first round of the NFL draft.

To compensate for losing Fant and Hockenson, Iowa is expected to ask Stanley to lean much more heavily on his wide receivers — a position that's been up and down in recent seasons at Iowa. But the Hawkeyes have more potential on the outside than they've had in years, with proven juniors Ihmir Smith-Marsette and Brandon Smith expected to be bolstered by promising freshman Tyrone Tracy Jr. and Nico Ragaini.

Iowa is also hoping that Michigan transfer Oliver Martin will be eligible this season, even though his status remained unsettled with less than a week to go before the opener.

"Those guys, as talented as they are, their work ethic is right up there (as well)," Stanley said. "There's a great connection and rapport, so back and forth between us...I'm excited to see what they can do.