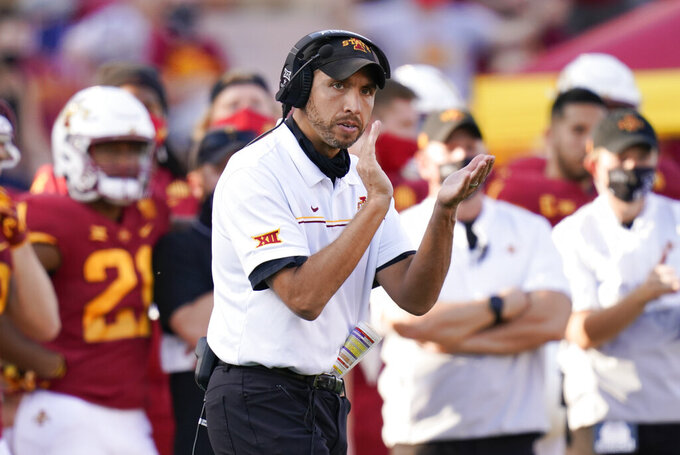 FILE - Iowa State head coach Matt Campbell reacts on the sideline during the second half of an NCAA college football game against Texas Tech in Ames, Iowa, in this Saturday, Oct. 10, 2020, file photo. Iowa State won 31-15. Big 12-leading Iowa State is on the verge of getting into its first conference championship game in any league. (AP Photo/Charlie Neibergall, File)

As the old man on the roster, Landen Akers has been at Iowa State even longer than fifth-year coach Matt Campbell.

The Cyclones occupied the spot next to Kansas at the bottom of the Big 12 when the wide receiver from Cedar Rapids, Iowa, arrived in Ames. Now the Cyclones (7-2, 7-1 Big 12) are alone in first place heading into Saturday's game against West Virginia (5-3, 4-3).

“It’s been a long journey,” said Akers, now 23. “It’s been tough but it’s been satisfying just to get through and get to this fifth year and be able to play like we are right now.”

Akers is among 17 seniors who will be playing their final home games at Jack Trice Stadium. He was a member of Paul Rhoads' final recruiting class in 2015. He made a deal with Rhoads to delay his enrollment until January 2016, with the promise that a scholarship would be waiting for him then.

Rhoads kept his word, arranging the scholarship before he got fired, and Akers has never given Campbell a reason to take it away.

Akers is the team's third-leading receiver this season, and he has averaged almost 16 yards on his 35 career receptions. He has made his biggest mark on special teams and blocked a punt against Baylor this season.

“The glue to our football program,” Campbell called Akers. “For the last three years he has started on almost every special team — kick return, punt team, punt return team. Some of our biggest moments, it may be a play Landen made that kind of sparked some of those moments.”

It took a while to reach this point. Akers stocked shelves at a grocery store while paying costs for school his first semester. He sat out as a redshirt in 2016.

“I didn’t really see that it would pay off,” he said. “It was a tough time then. The first year I was here we weren’t’ doing so well."

“I started to see things were changing,” Akers said, "and we could become the team we wanted to be.”

Iowa State would clinch a berth in the Big 12 championship game Dec. 19 in Arlington, Texas, if any of the following occur: The Cyclones beat West Virginia; Texas beats Kansas State; Oklahoma loses to Baylor: or Oklahoma State loses to TCU.

West Virginia hasn't played since it beat TCU 24-6 on Nov. 14. The Mountaineers had a scheduled open date before last week's game against Oklahoma was postponed because of the Sooners' COVID-19 issues.

“We've handled it the best we could,” coach Neal Brown said. “We are going to be fresh. That’s the positive. I hope our timing can stay sharp. I think we’ll play fast and hopefully our execution will match that.”

Hall is running for 140 yards per game and Brown for 112. The two are among the national leaders for yards after contact, with Hall averaging 3.7 and Brown 3.1, according to Pro Football Focus. They both have good hands catching screen passes or as check-down receivers.

“Breece Hall is going on year two of this type of production. That's our hope for Leddie,” Brown said. “He's definitely on his way here in year one. The break has been better for Leddie because he's going to be full tilt heading into this contest.”

Brown knocked down media speculation that he was a candidate for the South Carolina job. He's 10-10 in two years at West Virginia after a successful four-year run at Troy.

“I guess it's good because it means people are paying attention and we're doing something right,” Brown said. “I'll make it clear. I'm not a candidate there.”