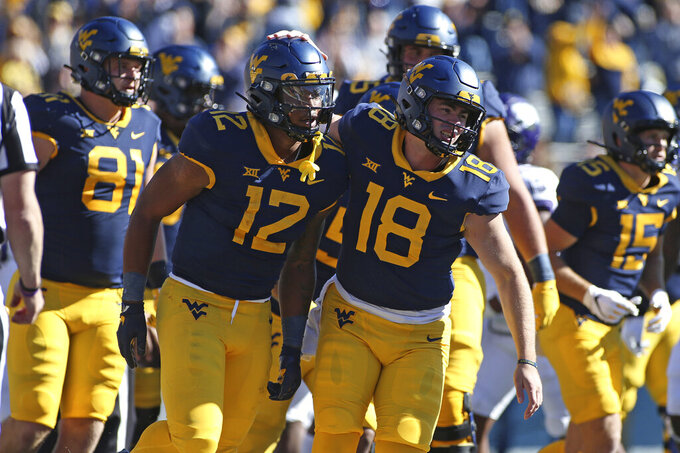 Line: Iowa State by 7 1/2, according to FanDuel Sportsbook.

Iowa State and West Virginia each need three wins to achieve bowl eligibility, and each has four chances to get them. The Cyclones have been to five straight bowls and the Mountaineers to two in a row. The loser probably can plan to be home for the holidays.

West Virginia QB JT Daniels vs. Iowa State pass defense. Daniels bounced back from a horrid game against Texas Tech to throw for 275 yards and two touchdowns against Big 12-leading TCU. More pressure falls on him this week with the loss of RB C.J. Donaldson Jr. to a season-ending leg injury. He'll be going against a Cyclones defense allowing a Big 12-best 180 yards per game through the air.

West Virginia: RB Tony Mathis, who averages 70 yards per game and has scored five touchdowns, would be in line to start with Donaldson out. Mathis missed last week's game against TCU because of injury, and coach Neal Brown said his status was undetermined. Another backup, Justin Johnson, has been banged up and it's not known how much he can play, if at all.

Iowa State: WR Xavier Hutchinson is bidding to become the Cyclones' all-time leader in receptions. He has a nation-leading 77 catches and needs 18 more to break Allen Lazard’s record of 241.

West Virginia, averaging 34.1 points per game, is the highest-scoring Bowl Subdivision team that has a losing record. ... Iowa State's five-game losing streak is its longest since 2016, coach Matt Campbell's first year. The Cyclones haven't lost six in a row since 2014 under Paul Rhoads. ... ISU QB Hunter Dekkers is coming off back-to-back 300-yard passing games. ... West Virginia's Casey Legg has made all 12 of his field goal attempts. ... The Mountaineers have lost five of their past six games played on natural grass.