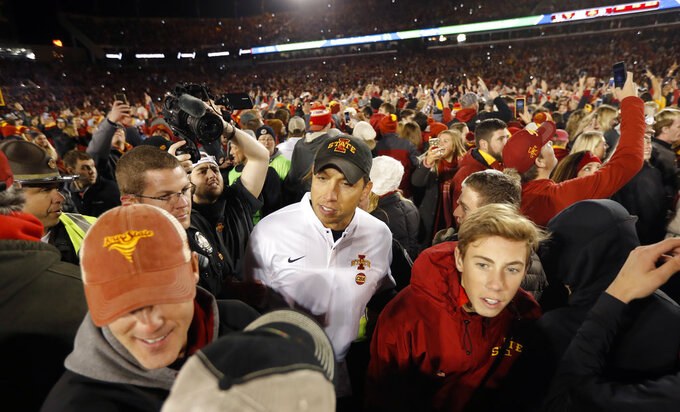 After a strange and sluggish start to 2018, the Cyclones appear ready to burst back onto the national scene — and they looked more dominant than endearing in throttling then-No. 6 West Virginia.

The Cyclones held one of the nation's best offenses to 152 yards and one third-down conversion in 10 tries. They sacked Will Grier seven times in 42 plays and forced a team that had punted just 12 times in five previous games to do so eight times.

Iowa State outgained the Mountaineers, ranked sixth entering play, by a staggering 346 yards and maintained its composure after a blocked field goal was returned by West Virginia for a touchdown in the second quarter.

"How many yards did they give up, like 150? Wow. That's incredible. Weren't they like a top-10 offense?" said Iowa State tight end Charlie Kolar, who caught a 19-yard touchdown pass from Brock Purdy. "Defense, all the credit goes to them. They played one heck of a game."

The suddenly dominant Cyclones survived their top-heavy schedule with a split — and after next week's bye they'll likely be favored in five of their final six games.

They could even finish with a better record than last year, something that seemed impossible even two weeks ago.

Iowa State went 8-5 in 2017 and signed rising young coach Matt Campbell to a lucrative extension after the end of the regular season. It looked as though the Cyclones were on their way to moving beyond their largely pathetic past.

Lightning forced Iowa State to cancel its opener less than 5 minutes in, and starting quarterback Kyle Kempt hurt his knee in a 13-3 loss at Iowa. High-powered Oklahoma came to town next, and though Iowa State hung close, it still fell 37-27.

Backup Zeb Noland piloted the Cyclones to a 26-13 win over Akron, but it still felt as though they had yet to find their footing. A 17-14 loss to TCU in which Noland struggled mightily left Iowa State at 1-3 and seemingly fighting simply to become bowl eligible.

But a switch to Purdy, a highly touted freshman, has given the Cyclones the spark they were looking for — leading to back-to-back wins.

"1-3 probably kills most teams, too," Campbell said when asked about his team's mental toughness following Derrek Pitts Jr.'s 72-yard return on Saturday, a potential momentum changer that made it 20-14. "This is what has made this team really special. I really think it started last year with that senior class. Adversity is going to happen ... and our ability to respond to that was really powerful."

Purdy and star running back David Montgomery played together for the first time against the Mountaineers.

They looked awfully dangerous in their debut as a duo.

Purdy threw for 254 yards and three touchdowns, giving him seven in two games, and Montgomery added a career-high 189 yards after sitting out last week to rest an upper arm injury.

Purdy has been so impressive that he has probably taken the starting job away from Kempt, even though the senior will likely be healthy when Iowa State returns to action on Oct. 27 at home against Texas Tech.

"He does a great job of extending plays. He keeps his eyes downfield," West Virginia coach Dana Holgorsen said of Purdy. "He does the little pump fake thing, which is something you teach in junior high, and you can't leave your feet. It's just so tempting. It's not like we didn't have film. He did it all last week. He's a good player. He runs around and makes plays."