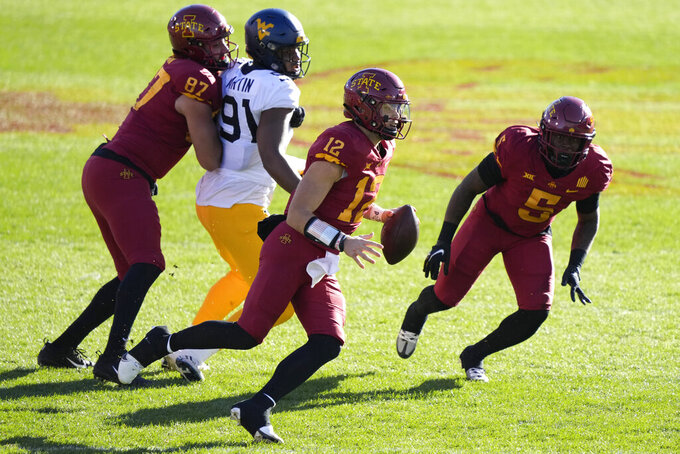 The Cyclones (4-5, 1-5 Big 12) snapped a five-game losing streak and kept alive their hopes of playing in a bowl game for the sixth straight season.

“From a second-half standpoint, I really thought we were outstanding,” Iowa State coach Matt Campbell said. “Really in all phases in the second half, that's the best we've been.”

Dekkers, who finished 24-of-36 passing for 219 yards, engineered an 8-play, 94-yard drive that helped Iowa State seize control early in the fourth quarter. The Cyclones were helped by a roughing-the-punter penalty and boosted by Deon Silas' 38-yard run before Hutchinson capped the drive with a 24-yard scoring catch.

“That just shows the type of offense that we can be,” Dekkers said. “We can go on a long (drive) and score.”

“For Cartevious, it was really the second game of his career,” Campbell said of the freshman. “So, I thought it was another big step forward for him.”

West Virginia (3-6, 1-5) netted just 200 total yards on offense, with much of it coming after the outcome had been determined.

Dekkers capped a 13-play, 86-yard drive with a 16-yard touchdown pass to DeShawn Hanika, giving Iowa State a 10-0 lead with 7:51 left in the second quarter.

At that point, the Cyclones were outgaining the Mountaineers 174 yards to 41, with ten first downs to West Virginia's three.

“The story of our game was the inability of our offense to move the ball at all,” West Virginia coach Neal Brown said. “The stats were putrid.”

Hutchinson now has a school record 87 catches this season, breaking his own mark of 83, set last year.

“I don't know if I can say enough great things about Xavier,” Campbell said. “We wouldn't even have a chance to be where we're at today without Xavier Hutchinson.”

The Mountaineers cut the margin to 10-7 before halftime when J.T. Daniels threw a 25-yard touchdown to Bryce Ford-Wheaton.

Bowl eligibility is a longshot for West Virginia (3-6). The Mountaineers were down to their third string running back Saturday, and the defense arrived at Iowa State having allowed at least 38 points to every Big 12 opponent.

Iowa State receiver Xavier Hutchinson entered Saturday needing seven catches to break his school record for most receptions in a season. He set the old mark of 83 catches last year and made five in the first half Saturday. His record-tying sixth came with 13:06 left in the third quarter. Hutchinson made his seventh reception with 8 minutes left in the third.