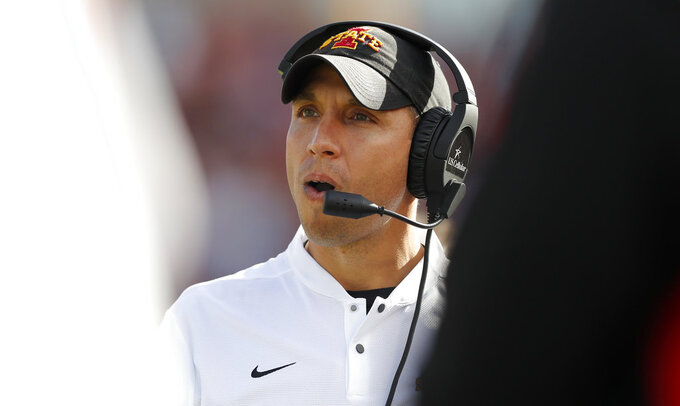 Coach Matt Campbell announced on Monday that Noland, who has already used his redshirt season, will leave at the end of the semester.

Noland started five games for the Cyclones, including four this season. Noland threw for 722 yards on 70 of 110 passing, but Purdy has been the spark Iowa State (4-3, 3-2 Big 12) was looking for when he relieved Noland in a win at Oklahoma State three weeks ago.

Senior Kyle Kempt is now the backup, with freshmen Devon Moore and Re-al Mitchell behind him.

Purdy has completed 65 percent of his passes and thrown for nine touchdowns against just two interception. Purdy had 250 yards passing and a pair of touchdowns as Iowa State beat Texas Tech 40-31 on Saturday — a game Noland skipped for what Campbell described as a leave of absence.

Purdy has also rushed for 170 yards, and his feet have come in handy while playing behind an improved but spotty line.

"I want to thank Zeb for his time at Iowa State," Campbell said. "He notified me of his decision to transfer in order to find more playing time. I respect Zeb's decision and we will assist him in his process of finding another school."

By John Zenor 2 minutes ago
By Pete Iacobelli 2 hrs ago
2 hrs ago
By Ralph D. Russo 6 hrs ago
By Ken Powtak 19 hrs ago