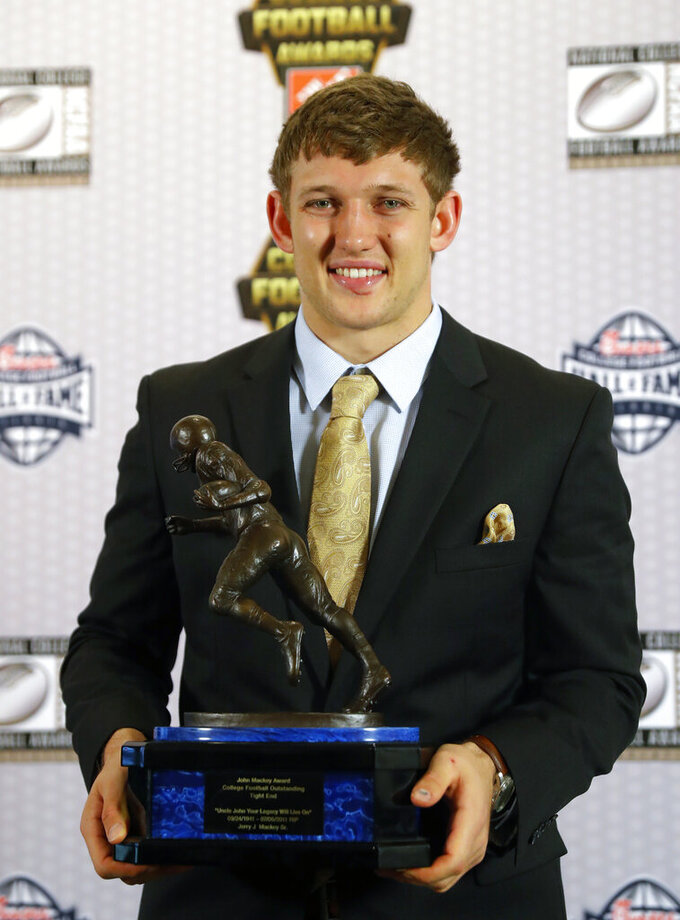 FILE - In this Dec. 6, 2018, file photo, Iowa's T.J. Hockenson poses with the trophy after winning the John Mackey Award as top tight end in college football, in Atlanta. Hockenson is leaving school early for the NFL. The Hawkeyes announced on Monday, Jan. 14, 2019, that Hockenson, a redshirt sophomore, will join teammates Noah Fant, Anthony Nelson and Amani Hooker as early entrees in the draft. (AP Photo/John Bazemore, File) 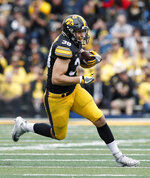 DES MOINES, Iowa (AP) — Iowa's recruiting pitch will be bolstered by the fact that four of its players decided to leave early after receiving encouraging draft grades from the NFL.

It might also make next season tougher than ever.

The Hawkeyes announced on Monday that T.J. Hockenson, a redshirt sophomore, will join fellow tight end Noah Fant, defensive end Anthony Nelson and defensive back Amani Hooker as early entrees in the draft.

The 6-foot-5, 250-pound Hockenson won the Mackey Award, given to the nation's top tight end, in 2018. He caught 49 passes for 760 yards and six touchdowns last season, helping the Hawkeyes finish 9-4 and ranked 25th in the final poll of the year.

"Amani, Anthony and T.J. have been outstanding members of our team on the field and as leaders within the program," coach Kirk Ferentz. "While we are disappointed to see them leave, we recognize this is an important decision and we wish them the very best as they pursue the draft."

Iowa will likely be able to absorb the loss of Nelson given the depth at defensive line. And while Hooker's versatility in switching between safety and linebacker will be missed, the Hawkeyes have plenty of options in the back end of its defense.

Replacing Hockenson and Fant, however, might be Iowa's biggest challenge this offseason. Fant caught 39 passes for 518 yards and seven TDs, and his presence helped free up Hockenson to make plays.

"My dream has always been to play in the NFL, and I believe now is the right time," Hockenson said in an Instagram post announcing his departure.

The Hawkeyes will hope that seldom-used veteran tight ends Drew Cook, Shaun Beyer and Nate Wieting can step up next season. Iowa will also likely look to get wide receivers Ihmir Smith-Marsette and Brandon Smith more involved in the game plan.