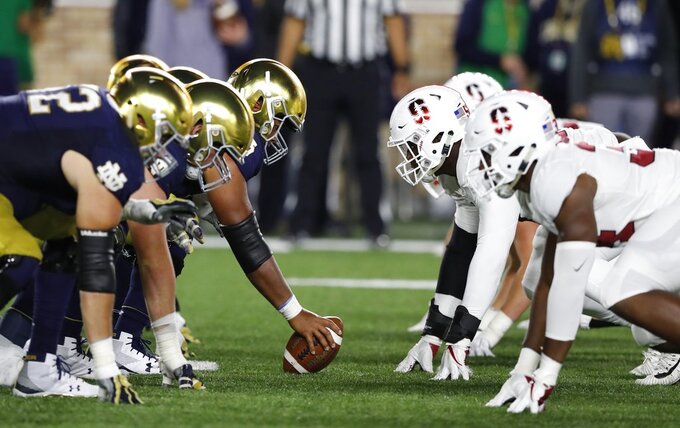 FILE - In this Saturday, Sept. 29, 2018 file photo, Notre Dame and Stanford face off during the first half of an NCAA college football game in South Bend, Ind. Notre Dame’s offensive line is preparing for its biggest challenge of the season. The Fighting Irish will face Clemson in a playoff semifinal at the Cotton Bowl on Dec. 29. The Tigers have one of the best defensive lines in the country and the No. 2 defense overall. Notre Dame defensive line coach Jeff Quinn says his players know what they are up against, but are confident as they get their game plan together.(AP Photo/Carlos Osorio, File)

SOUTH BEND, Ind. (AP) — Ask Notre Dame center Sam Mustipher a question and you will get a straight answer.

So what does he think of the defensive front four the Fighting Irish will face Dec. 29 at the Cotton Bowl in the playoff semifinal against Clemson?

"They're athletic, they're big, they're physical and they're nasty," Mustipher said.

And he's right, of course. Defensive ends Clelin Ferrell (6-4, 265 pounds) and Austin Bryant (6-6, 280) and tackles Christian Wilkins (6-4, 315) and Dexter Lawrence (6-4, 350) are regarded as the best in the country and how Notre Dame deals with them will go a long way in determining which team reaches the national championship game Jan. 7.

Notre Dame offensive coordinator Chip Long has been watching video of the Tigers' 12-0 season that includes a 42-10 ACC title game victory over a Pittsburgh team that Notre Dame beat 19-14 in South Bend.

"I don't want to give you my first impression," Long said with a slight chuckle. "They are awfully good."

Experienced, too. It will be Notre Dame's first foray into the playoff, but it's the fourth straight year Dabo Swinney's team has qualified. Coach Brian Kelly also noted the skills across Clemson's defensive front.

Mustipher has 37 consecutive starts on a revamped offensive line that had Quenton Nelson and Mike McGlinchey taken in the first round of the NFL draft after last season and one that lost senior left guard Alex Bars to a season-ending knee injury against Stanford. The unit also has a first-year coach in Jeff Quinn, who replaced Harry Hiestand after he left to join the Chicago Bears.

Clemson players are calling the Irish offense a tough challenge.

"They have a great offensive line, probably the best offensive line that we've played this year," Bryant said. "They have a really good quarterback, he's a baller. He can run and he can throw. He can scramble to run or scramble to throw, keeps his eyes downfield. They'll spread you out and then bring it back in and try and run it right at you with those great running backs."

The Irish are averaging 456.1 yards per game, including 190.5 yards on the ground primarily behind Dexter Williams. They are surrendering just 1.6 sacks per game heading into their biggest challenge of the season.

"What I've really been impressed with is the leadership, especially from Sam," Quinn said. "These guys are chomping at the bit. It's about knowing who you are, knowing what their scheme is and how we're going to block them rather than talking up the hype. We know they are all good. They know they will be facing a very talented group. This is probably one of the better units we've faced. We face a great one every day in our own building, too, so we feel confident."

If you're tracking the beef, the Irish offensive line outweighs the Clemson defensive front 309 pounds to 302 on average — but the speed and raw power of the Tigers are what impresses Notre Dame the most. Book, who has shown an ability to get the ball to his playmakers or sense pressure in the pocket and run, believes his linemen will be up for it.

"We've got to be sharp," he said. "There can be no missteps, no misplacement of the hands and definitely no missed assignments and no missed blocks. Anytime you are playing on a stage like this, it comes down to who is going to make the fewer mistakes."