Irish, Middies meet as ranked foes for first time since 1978 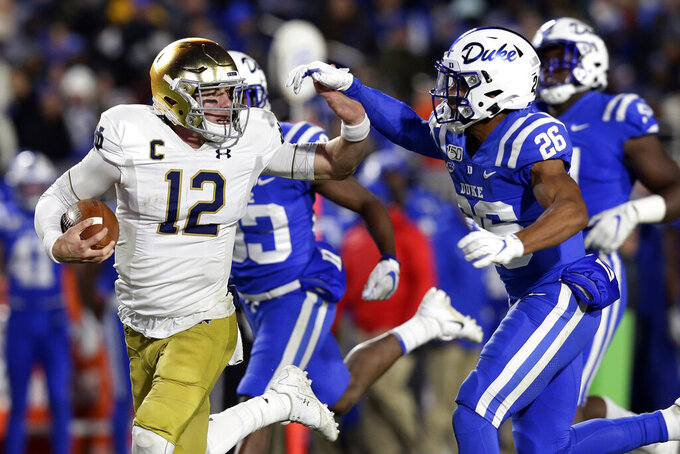 A chance to be warmer over the holidays. Both teams are bowl eligible and the winner could be in the mix for a New Year’s Six bowl berth but must win out. Navy, riding a five-game winning streak, needs to beat the Irish, SMU and Houston, qualify and win the ACC Championship and then beat Army. The Irish, after wins over Virginia Tech and Duke, needs to beat Navy, Boston College and Stanford to finish on a five-game winning streak and still could be left out in the cold.

Notre Dame’s defense vs. Navy’s triple-option offense. The Irish defense, which has lost defensive ends Daelin Hayes and Julian Okwara in recent weeks, is 26th overall in total defense (329.3 yards per game) but 64th against the rush (157.6 yards). The potent Midshipmen lead the nation in rushing (357.9 yards) and are ninth in scoring (40.1 points).

Notre Dame: Free safety Alohi Gilman. The senior, in his second season as a starter, transferred to Notre Dame from Navy after a 2016 campaign during which he had a team-high 12 tackles in the Midshipmen’s 28-27 victory over the Irish at Jacksonville, Florida After sitting on 2017 season, Gilman made seven tackles (six solo) against Navy in 44-22 Irish victory at San Diego.