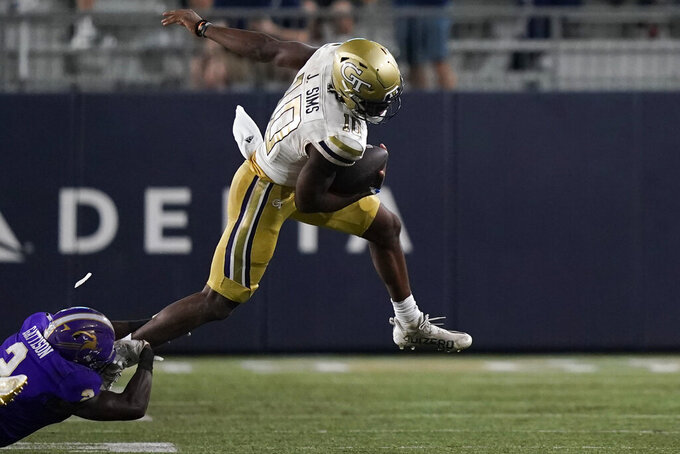 ATLANTA (AP) — Dontae Smith ran for 102 yards and three touchdowns, and Georgia Tech turned to its running game and a takeaway-savvy defense to snap a seven-game losing streak with a 35-17 victory over Western Carolina on Saturday night.

“It’s definitely a confidence builder," Smith said. “We kind of struggled in the last three games that we played and so this is definitely putting our confidence back where it needed to be. We’re going to keep it rolling."

The Yellow Jackets (1-1) forced four turnovers — interceptions by Derrik Allen, Myles Sims and Charlie Thomas and a fumble recovery by Aliyde Eley — and swarmed the FCS Catamounts (1-1) to hold them to just 118 yards in the second half.

Georgia Tech, which finished with 243 yards rushing and 7.1-yards per carry, had lost its last three games by a combined 141-10 score, leaving embattled coach Geoff Collins 9-26 entering the game.

But the Jackets scored on consecutive possessions in the first and second quarters and never trailed again.

Western Carolina quarterback Carlos Davis, coming off a school record six TD passes and 433 yards passing in a win last week at Charleston Southern, finished with 233 yards on 18 of 27 passing. He constantly escaped with scrambles before getting knocked out of the game late in the third quarter on a hit by Eley.

Cole Gonzales took charge of the offense and quickly threw an interception to Thomas.

The loss dropped the Catamounts to 0-61 all-time against FBS competition and 0-33 against the Atlantic Coast Conference.

The teams traded turnovers early in the third as Eley recovered a high snap over Davis’ head, but on the next play quarterback Jeff Sims was intercepted on a deep ball by Rod Gattison at the 10-yard line. It was an off game for Sims, who was just 8 of 17 passing for 100 yards, none in the second half.

Georgia Tech used some option formations on its next possession, an eight-play, 61-yard drive that ended with Dylan McDuffie scoring a TD with a 2-yard run that made it 35-14.

“I think the biggest thing is we wanted to establish the run," Collins said, “and I thought Jeff did a great job of getting us in the right looks to help us have success in the run game as well."

The Jackets tied it at 14-all when Smith broke off a career-long 51-yard TD run, outrunning Taurus Dotson Jr. and Cameron McCutcheon to the end zone. The Jackets quickly got the ball back after Western Carolina receiver David White Jr. tipped the ball up and safety Derrik Allen pulled down the interception.

Nate McCollum followed by scoring on a 40-yard run down the left side to give the Jackets a 21-14 lead.

Davis found Terrence Horne for a 49-yard touchdown pass on the Catamounts’ opening drive. Horne beat Sirad Bryant down the middle for an over-the-shoulder catch near the goal line, and Western Carolina led 7-0.

After Davis found Desmond Reid on third down for a 30-yard gain in the left flats, Toler Keigley was wide open down the left side for a 22-yard TD and the Catamounts were up 14-7.

“For the most part, once we got up, we didn’t then play consistent football, we didn’t execute at a high level and we turned the ball over," Western Carolina coach Kerwin Bell said. “I think that’s what did us in especially going into halftime 28-14."

The Jackets put together a nine-play, 72-yard TD drive that culminated with Smith’s 9-yard run around right tackle to make it 7-all.

Georgia Tech’s defense got a sack from Eley, a sack from Keion White, a sack from Jason Moore and the special teams got a big boost from McCollum’s 26-yard punt, the Jackets’ longest since 2015.

Western Carolina: The Catamounts gave the Jackets’ defense all it could handle in the first half, producing 272 yards of total offense before their effectiveness tailed off. Western Carolina averaged 471 yards last year in total offense, but they committed 32 turnovers, an average of nearly three per game, so that’s a number that still needs cleaning up. It’s unclear how much time Davis will miss. He watched the rest of the game with his right arm in a sling.

Georgia Tech: The victory lessens some of the heat on Collins, who’s coaching to save his job in his fourth season, but the Jackets should’ve had an easier time handling an FCS opponent. A missed 25-yard field goal attempt by Jude Kelly midway through the third left Tech leading 35-17 and giving Western Carolina a glimmer of hope. Thomas, the inside linebacker who leads the defense, returned from a targeting penalty last week that forced him to miss the first half and finished with eight tackles, two tackles for a loss, one sack and an interception. Good news for the Jackets was the team committed just four penalties after getting whistled 10 times last week.