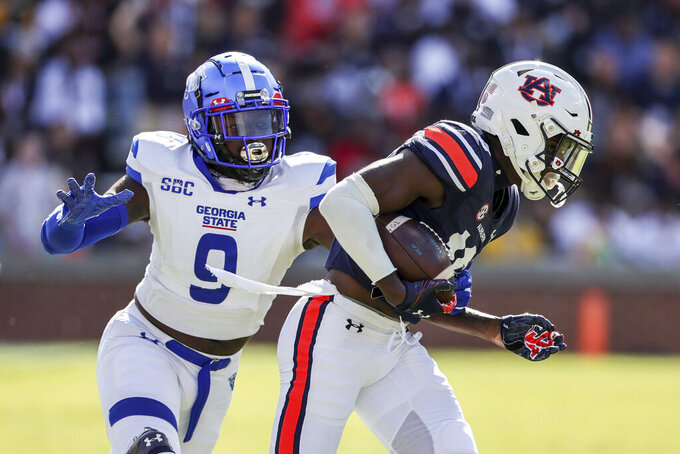 Auburn cornerback Nehemiah Pritchett (18) tries to get past Georgia State linebacker Jamil Muhammad (9) on a kick return during the first half of an NCAA football game Saturday, Sept. 25, 2021, in Auburn, Ala. (AP Photo/Butch Dill)

AUBURN, Ala. (AP) — Shedrick Jackson caught a 10-yard touchdown pass from T.J. Finley with 45 seconds remaining, and No. 23 Auburn rallied to beat Georgia State 34-24 on Saturday.

Auburn trailed Georgia State by 12 points at halftime and avoided losing to a Sun Belt team for the first time in program history.

Finley, an LSU transfer who replaced starting quarterback Bo Nix late in the third quarter, led Auburn (3-1) on a 98-yard scoring drive in the final minutes.

“The message (from the coaches) was just go out and play ball, like you’ve been doing since you were a toddler,” Finley said. “Just control the offense and do my job. I came in, and we got the job done.”

After Finley’s touchdown pass to Jackson on fourth down, Smoke Monday sealed the victory, returning an interception 36 yards for a score on the second play of the ensuing drive.

Led by running back Tucker Gregg, Georgia State (1-3) generated 299 yards of offense and 24 points before halftime, but was unable to add to its lead in the final quarters.

“I think our football team played one unbelievable contest,” Georgia State head coach Shawn Elliott said. “They played as hard as they could. They had some adversity and really fought and dug. It’s really amazing that it came down to a fourth-down play.”

The Tigers’ special teams started the comeback with a touchdown off a blocked punt late in the third quarter, and their defense allowed only 85 yards in a second-half shutout.

Auburn: The Tigers avoided a disastrous result, but the game exposed plenty of problems on both sides of the ball. Georgia State had the advantage at the line of scrimmage for most of the game, which is a major issue for a team heading into the start of a tough SEC schedule.

“At the end of the day, it’s not pretty,” Auburn first-year head coach Bryan Harsin said. “We have to learn from this, in things that we learned from this game that we know we can do better. ... We’ve got to take all of that into conference play. That has to continue to keep getting better. We have finals every Saturday, not just quizzes.”

Georgia State: The Panthers will be disappointed to not pull off their second win over an SEC team in three years, but they’ll have a lot of positives to take away from the close loss. Georgia State seems to have rebounded from its early season offensive struggles, as it has been keyed by a strong ground game over the last two weeks.

“We controlled the line of scrimmage a week ago, and we ran the ball really effectively in the first half,” Elliott said. “Our offensive line does a good job. We’ve got a lot of starts under our belt up front ... and we’ve got some fresh backs.”

Linebacker Barton Lester landed on the ball in the end zone, giving Auburn its first touchdown off a punt block since a win over Arkansas last season. Lester also recovered the block for the touchdown in that game.

Georgia State rushed for 218 yards in the first half, with Gregg breaking runs of 57 and 50 yards. But after halftime, the Panthers were held to 48 rushing yards on 23 attempts.

One of the keys for Auburn’s defense in the second half was the return of leading tackler Zakoby McClain, who was suspended for the first half due to a targeting penalty he received last week against Penn State.

“He just flies around and makes plays,” Auburn defensive tackle Colby Wooden said. “It was vital for him to come back and give us the energy we need.”

The No. 23 Tigers dropped one spot in the poll after a loss at Penn State last week, but their underwhelming performance against a large underdog could cost them their place in the Top 25.

Auburn travels to face LSU in its SEC opener on Oct. 2.