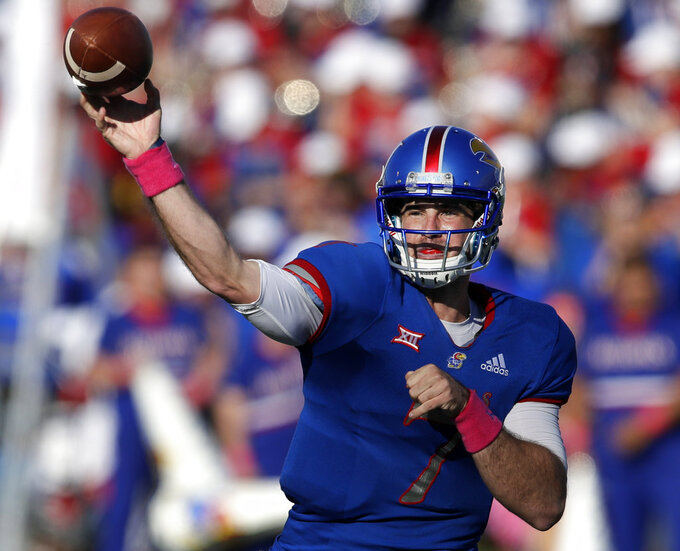 FILE - In this Oct. 27, 2018, file photo, Kansas quarterback Peyton Bender (7) passes during the second half of an NCAA college football game against TCU, in Lawrence, Kan. Bender had heard all the criticism about him. About the Jayhawks. About his coach. But with a gutsy performance against TCU last week, the Kansas quarterback finally quieted the critics _ at least for a week. (AP Photo/Orlin Wagner, File) 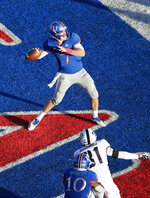 LAWRENCE, Kan. (AP) — Kansas quarterback Peyton Bender had heard all the criticism the past couple years.

He heard it about him. About the Jayhawks. About his embattled coach.

But on a sun-splashed afternoon at Memorial Stadium, with the leaves turning brilliant colors of auburn and gold on the hill leading to the campanile, the senior quarterback answered all those critics with a gutsy performance that delivered a much-needed win over TCU.

He threw for 249 yards with a pair of touchdowns to Pooka Williams, and he lowered his shoulder and plowed for a crucial first down in the closing minutes that helped to earn the victory.

"I couldn't be more proud of the kid," Beaty said. "He's a guy that's taken a lot of criticism along the way and there's a good reason we stick with him. We believe in him. We know he's got some real ability. He made as good a play as I've seen him make since he's been here when he scrambled and got the ball down there to Pooka for that touchdown in the third quarter."

Indeed, that may have been the highlight of Bender's day.

It was early in the third quarter and the Jayhawks were trailing 10-7, and had marched right downfield against the Horned Frogs. Bender was under pressure when he rolled to his right and, keeping his eyes on the end zone, spotted his freshman running back coming open.

The touchdown pass not only gave the Jayhawks the lead but the feeling they might finally win.

Bender kept making crucial plays throughout the second half. He led another nice drive that ended with a field goal, then hit Williams for the go-ahead touchdown pass with 6:13 left that allowed Kansas to give Beaty just his second Big 12 victory and the Jayhawks' first over TCU since 1997.

"I think as a unit, as a whole, we played a much more efficient game. Our coaches put in a great game plan to attack them where we thought was their most vulnerable spot," Bender said. "We just had to go up there and execute, and that's what we've been saying all year, we just need clean execution.

"That's something we haven't done," he said. "I feel like every week we have a very good game plan, we just haven't executed the way we really want to. I thought (against TCU) it was pretty clean execution and it gave us a chance to win. There's still some stuff we need to improve on, we'll go back and look at the film, diagnose it and get ready to go."

That's because for the first time since 2016, the Jayhawks (3-5, 1-4) will be trying to win two straight conference games when they face Iowa State on Saturday.

It has been a long, winding road for Bender. He was a touted prospect coming out of Florida when he signed with Washington State, where he was expected to be the next catalyst of coach Mike Leach's spread offense. He redshirted his first year and appeared in five games as a freshman, but he ultimately decided to transfer following the season.

He landed at Itawamba Community College in Mississippi, and played well enough during a season there that several schools came calling. He signed with the Jayhawks with the knowledge that the long-rebuilding program would give him an opportunity to start right away.

Bender did that, too. But he never really solidified his job last season, starting only eight games and watching Carter Stanley share plenty of snaps. The two continued their close competition into this season, and even at halftime last Saturday it wasn't certain Bender would play the second half.

He wasn't very good over the first 30 minutes against TCU.

But the polite, soft-spoken quarterback got the nod from Beaty for the third quarter and rose to the occasion, batting back the skeptics once again with a performance he will long remember.

"I can't say enough about him," Beaty said. "I thought he did a terrific job."