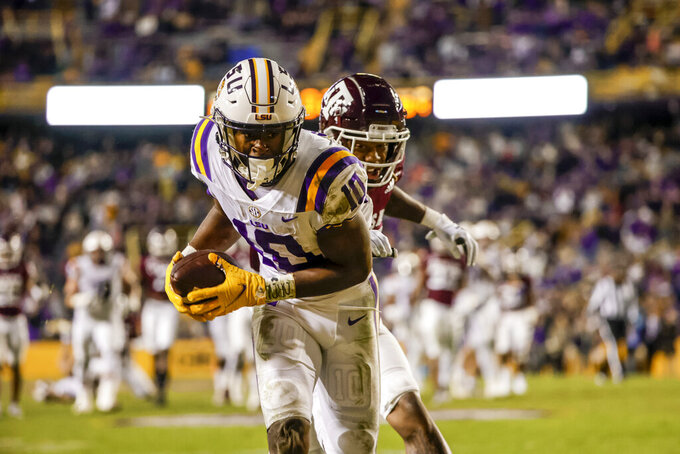 BATON ROUGE, La. (AP) — A string of clutch completions by Max Johnson in little more than a minute capped coach Ed Orgeron's roller-coaster tenure at LSU with a triumphant sendoff before a jubilant Tiger Stadium crowd.

Johnson hit Jaray Jenkins with a 28-yard scoring pass down the right sideline with 20 seconds left, and LSU knocked off No. 14 Texas A&M 27-24 on Saturday night to become bowl eligible.

“How about them Tigers baby?” said Orgeron, a Louisiana native who grew up an LSU fan and considered coaching the Tigers his dream job. “We just kept preaching to our football team to keep on fighting, keep on fighting and something good is going to happen.”

LSU (6-6, 3-5 SEC) had lost a 10-point lead in the fourth quarter and and were on the brink of their first losing season since 1999 on when Johnson, who'd been sacked six times in the second half, came alive on fourth-and-6 from the LSU 19 and less than 1:30 left.

Johnson kept the Tigers alive with a decisive throw over the middle to tight end Jack Bech and then hit Jenkins for a 31-yard gain. An 11-yard pass to Malik Nabers put LSU on the 28, setting up the go-ahead score three plays later and setting off a wild celebration in Death Valley while Orgeron smiled from ear-to-ear on the sideline.

“That is why we all came here — to win games and to be put in these situations,” Johnson said. “It was a pretty sweet feeling after the game.”

“I’ll never forget this game. I love this team,” Clark said. ““You couldn’t draw up a finish for this senior class any better. We stuck and fought together until the very end.”

The victory gave LSU two straight wins to close the regular season, but Orgeron said he and LSU's administration "mutually agreed he would not coach a bowl game and that offensive line coach Brad Davis would take over as interim coach.

“I told the guys that I wish them luck," Orgeron said. "I’m not going to sit here and coach when there is another guy coming in to be the head coach this week or the week after.”

The loss likely relegated Texas A&M (8-4, 4-4) to a less prestigious bowl while ending the Aggies chance for a first 10-win season since 2012.

“I'm disappointed,” Aggies coach Jimbo Fisher said. “They made one more play than we did. We have to play better and find a way to close those games out.”

Orgeron, who presided over an undefeated national championship season in 2019, has gone 11-11 since and agreed back in October to step down after this season.

One coach LSU was widely believed to be pursuing as a candidate to replace Orgeron is Fisher, a former LSU offensive coordinator and national championship coach at Florida State who was lured to College Station by former A&M athletic director Scott Woodward, who now holds the same post at LSU.

But Fisher has said he has no plans to leave the Aggies, who were outplayed by Orgeron's Tigers for most of three quarters before rallying to take a 24-20 lead with two TD receptions by Jalen Preston in the fourth quarter.

The go-ahead touchdown was a memorable one in which Calzada avoided a sack by scrambling left toward the sideline before finding Preston racing over to give him an outlet. After making the catch, Preston raced all the way back across the field before slipping a couple tackle attempts to complete the 32-yard scoring play.

Calzada finished 20 of 35 passing for 242 yards and three touchdowns without a turnover.

Calzada “made some big-time throws to help us," Fisher said. “He battled hard and made some great plays and put us in a position to win.”

Devon Achane had 121 yards from scrimmage, with 72 yards coming on short receptions. Moose Muhammad caught a 13-yard scoring pass in the first half.

Johnson was 22 of 38 for 306 yards and three TDs, including a 45-yard scoring pass in the first half to Jenkins, who finished with eight catches for 169 yards. Johnson, who had his fifth 300-yard passing game this season, also had a scoring pass on a short throw to speedster Trey Palmer, who sidestepped a few tacklers before bursting into the open field with such acceleration that a defender who appeared to have the angle on him could not push him out of bounds. The 61-yard touchdown gave LSU a 17-7 lead at halftime.

During pre-game ceremonies to honor senior LSU players, the seniors gathered together to honor Orgeron. The players presented him with a game ball as the Tiger Stadium crowd cheered enthusiastically.

Texas A&M: The Aggies came in tied for second in the nation in scoring defense, allowing 14.9 points per game, but LSU overcame A&M defensive end Michael Clemons' three sacks to score more than that and gain 412 total yards.

LSU: The changes LSU made on defense during their bye week in late October have now produced sustained results against four opponents — Alabama, Arkansas, Louisiana-Monroe and A&M. Aggies Running back Isaiah Spiller came in averaging about 107 yards rushing but was held to 27 yards on 11 carries.

Texas A&M: Awaits its bid to a bowl game.

LSU: Awaits a bowl bid while continuing its search for a new head coach.