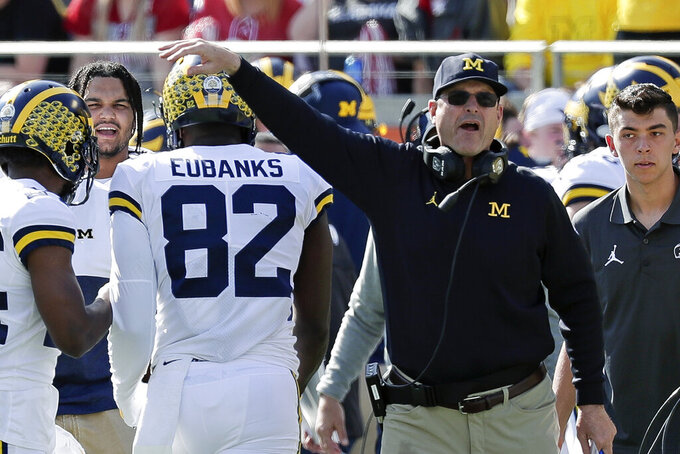 ANN ARBOR, Mich. (AP) — Jim Harbaugh was hired five years ago at Michigan, hailed as the coach who would restore glory for college football's winningest program.

The future, Harbaugh insisted, is bright.

“I feel good about that," he told reporters Wednesday after No. 9 Alabama beat the 14th-ranked Wolverines in the Citrus Bowl and dropped them to 9-4 in 2019. “I feel good about some of the young players that got great experiences this season."

Michigan has been good with its former star quarterback on the sideline, winning nine-plus games on average since he decided to leave the NFL and return to college. The Wolverines have not been that successful since Lloyd Carr retired following the 2007 season.

Michigan coaches, though, are largely measured by how they fare against Ohio State and in bowl games and Harbaugh has come up woefully short.

He is 0-5 against the Buckeyes, who have won 15 of 16 in the storied series, and has now lost four straight bowl games.

The Crimson Tide handed Harbaugh and the Wolverines their latest setback in the postseason, pulling away to win 35-16 by outscoring them 21-0 after halftime. The loss continued a trend as Harbaugh fell to 0-10 against teams ranked No. 15 or higher away from home..

Senior quarterback Shea Patterson missed opportunities to give Michigan a bigger lead in the first half and to keep it closer in the second. Patterson was plagued by overthrowing open receivers and finished 17 of 37 for 233 yards with one touchdown and two interceptions.

“I didn't play my best," Patterson said. “I missed a few throws. I felt like I didn't make enough plays."

When Harbaugh prepares for his sixth season this spring and summer, he will oversee a quarterback competition that will at least include Dylan McCaffrey and Joe Milton.

McCaffrey, son of former NFL player Ed McCaffrey and brother of Carolina Panthers running back Christian McCaffrey, redshirted in 2017 and played sparingly the next two years. Milton has played even less the last two seasons.

The player under center will have the benefit of a strong backfield with running backs Zach Charbonnet and Hassan Haskins coming back along with the return of Chris Evans.

Michigan's receiving corps will be without Tarik Black, who announced last month he is transferring,. The team might also be missing Nico Collins and Donovan Peoples-Jones if they decide to enter the draft or leave for another school.

Right tackle Jalen Mayfield, potentially, will be the only returning starter on the offensive line.

The defense has some key seniors departing, including linebacker Khaleke Hudson and cornerback Lavert Hill, and junior linebacker Josh Uche. Defensive end Kwity Paye and tight end Nick Eubanks are putting their NFL dreams on hold, choosing to stay in college next season.

Harbaugh will have at least one new assistant coach in 2020 because safeties coach Chris Partridge joined Lane Kiffin's staff at Mississippi on Thursday, taking away one of the Wolverines' best recruiters.

Michigan's opens the 2020 season at Washington and plays on the road against rivals Ohio State and Michigan State. The Wolverines will open the Big Ten season at home against Wisconsin and Penn State.