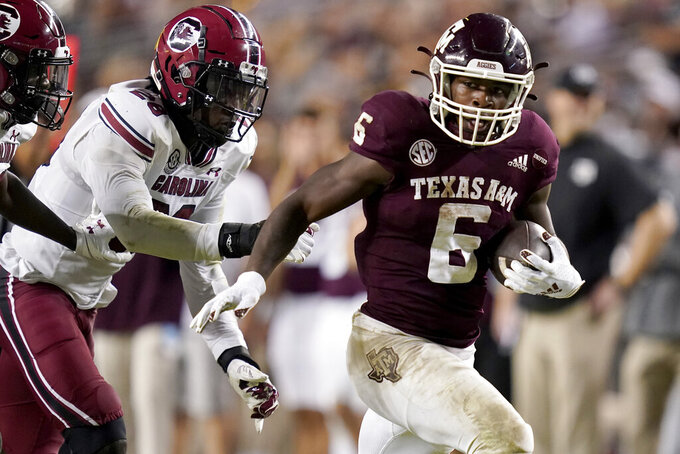 FILE - Texas A&M running back Devon Achane (6) outruns South Carolina defensive back Marcellas Dial (24) for a 35-yard touchdown run during the second half of an NCAA college football game Oct. 23, 2021, in College Station, Texas. Texas A&M is set to kick off its season on Sept. 3, 2022, against Sam Houston State. (AP Photo/Sam Craft, File)

Now that the season is approaching, the trash talk between the coaches has ended and Fisher and No. 6 Texas A&M will try to take the next step and compete with the top-ranked Crimson Tide for SEC superiority.

Saban upset Fisher this spring when he essentially accused Texas A&M and other schools of buying players when talking about the lack of regulation around athlete compensation.

Fisher called Saban’s comments despicable and labeled him a “narcissist.” Fisher denied his program did anything wrong while landing the No. 1 recruiting class in the country for 2022.

Both coaches received a public reprimand from the conference office for the incident before each said that they’d moved on.

“We all will learn, he will learn (and) hopefully I learn from things we do and say, and we move on from there,” Fisher said. “But I have great respect for him and their program like always.”

The Aggies handed top-ranked Alabama its only regular-season loss last year but fell to unranked Mississippi State and LSU to leave Fisher without a 10-win season in four seasons in College Station.

Texas A&M knows the path to winning its first national title since 1939 goes through Alabama and the Oct. 8 game in Tuscaloosa between the two already looms large.

“The goal for this team is to compete for the national championship,” guard Layden Robinson said. "We want to rise to the occasion, especially when the lights are the brightest. We just want to rise up this season.”

King won the job last year, but he broke his leg early in the second game. Zach Calzada started the rest of the season before transferring to Auburn.

Johnson was the starter at LSU last season before transferring to A&M. The son of Super Bowl-winning QB Brad Johnson, he threw for 2,815 yards with 27 touchdowns and six interceptions.

Perhaps the most intriguing of the group is Weigman, a five-star prospect and one of the stars of Fisher’s top-ranked recruiting class. The dual-threat QB accounted for almost 2,900 yards and 34 touchdowns as a senior last season after throwing for more than 3,800 yards with 42 touchdowns as a junior and running for nine more scores.

Fisher has been encouraged by how Johnson and Weigman have handled learning his offense.

“They understand it really well. They both do,” Fisher said. “Conner has picked it up very well for a young freshman. He’s a very intelligent guy. A very instinctive guy. If he makes a mistake, he doesn’t repeat it very often. Very encouraging in that way and developing. Max is doing the same thing.”

Running back Devon Achane, a junior who is a sprinter on A&M’s track team, moves into the starting lineup this season after running for 910 yards in a reserve role in 2021. Achane led the SEC and ranked in the top 15 in the country last season by averaging seven yards a carry.

Joining him this season is speedy freshman receiver Evan Stewart, who like Weigman was a five-star recruit and rated as the No. 1 receiver in Texas.

“We have more guys at the skill positions that, even though they don’t have a lot of experience, they are dynamic playmakers,” co-offensive coordinator Darrell Dickey said. “They may be young guys, but we have guys that can run, that can catch the ball make a guy miss and go the length of the field.”

Junior defensive back Antonio Johnson is poised to become A&M’s defensive leader after a strong 2021 season where he was second on the team with 79 tackles and had one interception and five pass breakups.

“He’s going to do a little bit of everything,” Fisher said. “He’ll play nickel, safety, dime. We can move him around and match him up because he’s such a tremendous football player.”

The Aggies open the season Sept. 3 against Sam Houston in the first of three home games capped by a visit from No. 16 Miami on Sept. 17. They head to AT&T Stadium the following week for their annual neutral site game against No. 19 Arkansas. Three consecutive road games come next, highlighted by the showdown at Alabama.