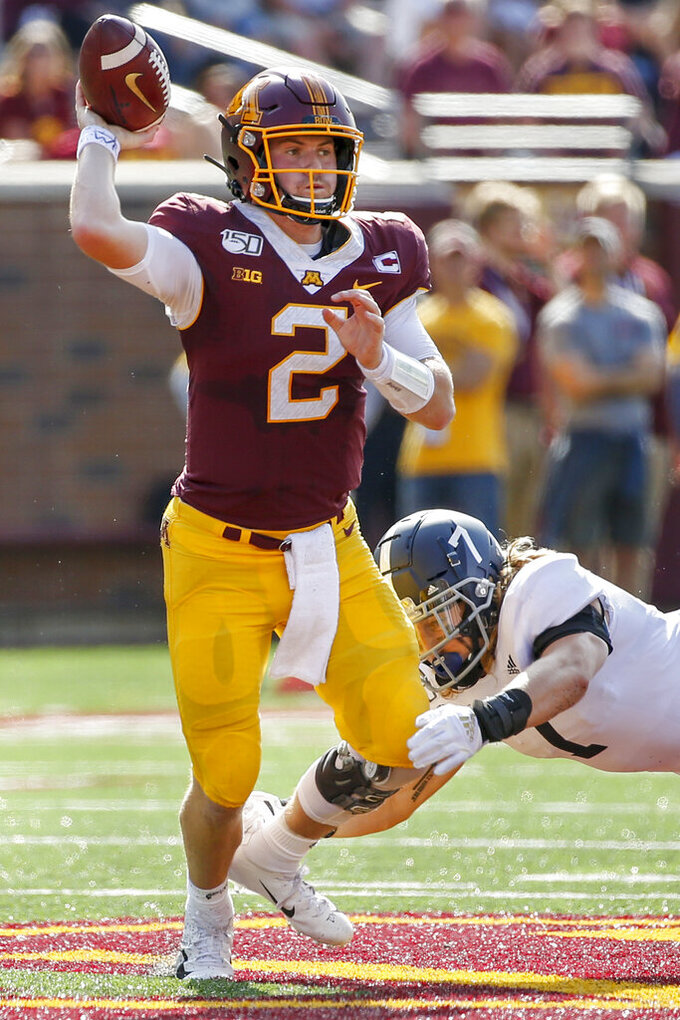 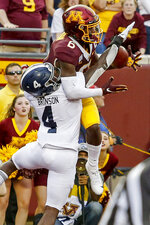 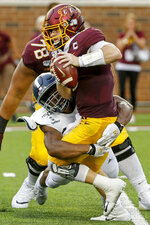 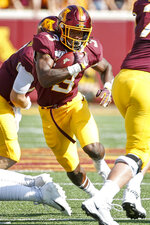 MINNEAPOLIS (AP) — This Minnesota team has made falling behind in the fourth quarter a troubling habit.

The Gophers have also managed to turn those deficits into quite the stockpile of resiliency.

Tyler Johnson caught three touchdown passes from Tanner Morgan, including the go-ahead score with 13 seconds left on Saturday to give Minnesota yet another tense victory, a 35-32 decision despite fourth quarter miscues that gave Georgia Southern two long touchdowns.

"This team has some of the most heart I've ever seen in my entire life," coach P.J. Fleck said.

Last week, Morgan found Chris Autman-Bell on fourth down for the tying 20-yard touchdown with 46 seconds left in regulation, before the Gophers beat Fresno State 38-35 in two overtimes. They trailed South Dakota State by one point midway through the fourth quarter, before pulling out a 28-21 victory.

Johnson, the star senior who deferred the NFL draft to stick with his hometown school for one more year, had 10 receptions for 140 yards in his third career three-touchdown game. On second-and-goal, Morgan floated a slightly underthrown pass to the corner of the end zone for a fade route. Johnson ran to grab it in front of Monquavion Brinson.

"Tyler cooked his guy," Morgan said, "and made an elite play."

The last-ditch drive netted 75 yards on 13 plays in 3:34, but a holding penalty and a sack pushed the Gophers back to their 6-yard line. Morgan hit Demetrius Douglas for 21 yards on third-and-29 and found him again on fourth down to keep the rally alive. Johnson and Rashod Bateman followed with two first-down catches apiece, before the winning score.

"We never had any doubt," Johnson said. "We train for any situation that can possibly come up."

With 6:05 remaining, Traver Vliem blocked Michael Lantz's 36-yard field goal attempt before Brinson grabbed it and weaved around the field for a 77-yard touchdown. After a sideline interference penalty by the Eagles pushed the 2-point conversion play back to the 18-yard line, Justin Tomlin's pass was incomplete, keeping the Gophers in front 28-26.

On the next possession, Rashad Byrd hit Morgan as he cocked his arm for a third down throw, leaped in the air to grab the ball, and ran 44 yards for the go-ahead score. The trick-play 2-point pass to left tackle Jarrod Leeds was completed, but Leeds was short of the goal line.

The Gophers (3-0) outgained the Eagles (1-2) in total yardage 382-198 and stretched the longest nonconference winning streak in the FBS to 18 straight games.

Morgan finished 19 for 31 for 289 yards under frequent pressure, but he threw an interception on Minnesota's first drive that gave Georgia Southern the ball. Logan Wright scored on a 21-yard run on the ensuing play.

Tomlin, a freshman who took over for Shai Werts in the opening loss at LSU when the junior hurt his shoulder, went 5 for 9 for 75 yards and ran 14 times for 57 yards in the triple option scheme the Eagles have used for years. Tomlin scored on a 12-yard scamper with 27 seconds left before halftime, when he appeared to be fumbling the ball as he crossed the pylon and tumbled out of bounds, but no replay review was ordered.

Quin Williams had two of Georgia Southern's five sacks that totaled 45 lost yards for the Gophers, and Tyler Bass, who's on the Lou Groza Award watch list, made field goals from 25 and 45 yards.

"They hurt right now, and I hurt for them," Eagles coach Chad Lunsford said. "I love these dudes. They've been through a lot, and they deserved this one."

Even excluding the sacks, the Gophers netted only 138 rushing yards on 43 attempts as the Eagles mostly smothered the inside zone plays preferred by Fleck and offensive coordinator Kirk Ciarrocca. The Gophers were essentially down to their fifth-string tailback, though, in Bryce Williams, who scored on a short run early in the fourth quarter. Rodney Smith (oblique) and Cam Wiley (concussion) were injured during the game, and Mohamed Ibrahim (leg) was hurt during the week in practice. Shannon Brooks (knee) has yet to be cleared for action. Fleck said none of the injuries were serious.

Georgia Southern: The Eagles, who won six FCS national titles before moving up in 2014, almost pulled off the program's second win over a Power 5 team. They won 26-20 at Florida in 2013. This performance, though plagued with self-inflicted setbacks like two lost fumbles by the offense and two penalties on the defense for 12 men on the field, ought to provide confidence for conference play and perhaps even for future visits to Big Ten foes Nebraska (2022) and Wisconsin (2023).

"One game doesn't define us," Byrd said. "We've just got to go back to work."

Minnesota: None of their nonconference foes were big-time programs. All three wins were too close for comfort. Still, those teams went a combined 32-8 last season, even if they were in lower-tier leagues. There's a valuable trait to be developed in learning how to win when trailing in the closing minutes.

"All three of those teams circled us as their Super Bowl," Fleck said.

Georgia Southern: The Eagles have a week off before opening Sun Belt play at home on Sept. 28 against Louisiana-Lafayette, which was picked by conference coaches in the preseason poll to win the West Division. The Ragin' Cajuns played in the Sun Belt championship game last year, losing to Appalachian State.

Minnesota: The Gophers get next weekend off, before playing their Big Ten opener at Purdue on Sept. 28. They've beaten the Boilermakers in five of the last six matchups, with the lone loss coming on the road in 2017, a 31-17 defeat. The Gophers won 41-10 at home last year.