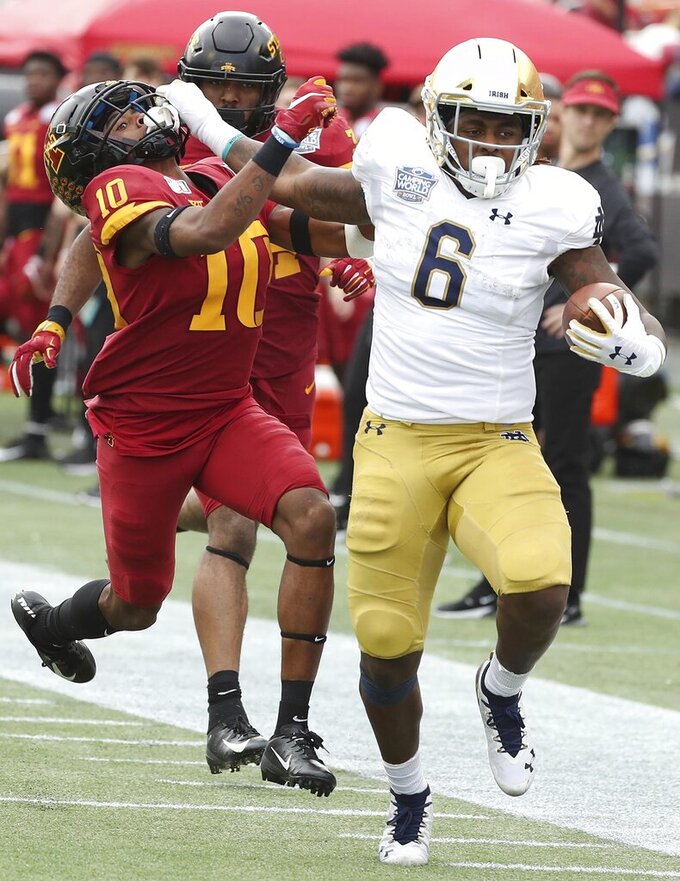 SOUTH BEND, Ind. (AP) (AP) — Running back Tony Jones Jr. became the second player for No. 14 Notre Dame to forego his final year of eligibility to enter the NFL draft.

Jones made the announcement Tuesday on Twitter. On Monday, senior safety Alohi Gilman declared for the draft, which is April 23-25.

The announcements followed quarterback Ian Book’s declaration Sunday night on social media that he would use his fifth year of eligibility to return in 2020.

The 5-foot-11, 224-pound Jones scored an 84-yard touchdown run early in the second half that gave the Fighting Irish (11-2, No. 15 CFP) breathing room in their 33-9 victory over Iowa State in the Camping World Bowl on Saturday.

Jones finished with 135 yards on 11 carries, his fifth 100-yard rushing effort in a season when he finished with a team-leading 857 yards with six touchdowns in 12 games despite missing the Virginia Tech game with a rib injury. He finished his Notre Dame career with 1,481 rushing yards and 12 touchdowns along with 27 receptions for 273 yards and two scores.

The 5-foot-10½, 202-pound Gilman finished his second season as a starter with 74 tackles, one interception, one fumble recovery and three fumbles caused, one that led to Notre Dame’s opening touchdown against the Cyclones. Gilman had a year of eligibility left after sitting out the 2017 season following his transfer from Navy, where he started 12 games in 2016 as a freshman.