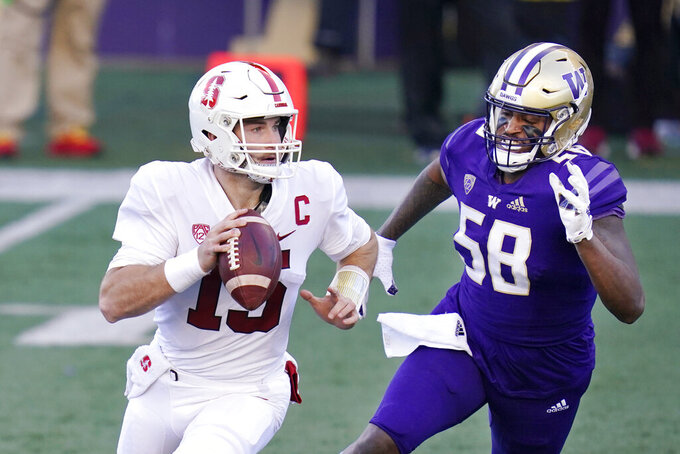 SEATTLE (AP) — First, Stanford was booted from its home, forced to relocate to the Pacific Northwest to continue its season.

Then when the Cardinal tried to have their pregame walkthrough in a parking garage, they got kicked out again and relocated to a park.

When it came time to finally play their game against No. 23 Washington on Saturday, the Cardinal had been through a week unlike any they’ve experienced.

“It’s been kind of been the mantra the entire week,” Stanford coach David Shaw said. “No matter what happens, if you have a great attitude, let’s do it. Let’s work with enthusiasm and do it to the best of our ability.”

The vagabond Cardinal showed no issues from their relocation, jumping to a 24-3 halftime lead and holding off Washington’s second-half rally for a 31-26 win.

Austin Jones rushed for a pair of first-half touchdowns and Davis Mills threw a 3-yard TD pass to Scooter Harrington early in the second half to give the Cardinal their first win in Seattle since 2014.

The victory capped a crazy week that saw the Cardinal forced away from campus in California due to restrictions in Santa Clara County. Stanford relocated its entire program to Seattle, used a high school for practice and even had its walkthrough in a public park in the suburb of Bellevue, just across Lake Washington from Husky Stadium.

Shaw and his staff originally tried to do the walkthrough in a mall parking garage, but were asked to go elsewhere.

“People were taking pictures and making fun of us, but we come out here and beat them up so there’s no happier feeling right now,” Stanford offensive lineman Foster Sarell said.

Mills was solid and had a pair of huge third-down conversion throws on Stanford’s final drive, hitting Semi Fehoko on both to convert third-and-10 and third-and-11. The Cardinal ran the final 7:54 off the clock with a 14-play drive that was capped by Jones’ 3-yard run on fourth-and-1.

“There’s a lot of circumstances that we can’t do anything about and we’re just going to go ahead and push forward, and at the end today we’re going to do whatever it takes to go out there and get a win," Jones said.

The Cardinal (2-2 Pac-12) will remain on the road before next week’s game against Oregon State.

Washington (3-1) will still likely have a chance at the Pac-12 North title if it can win at Oregon next week. But for the second straight game, the Huskies had a terrible first half. Unlike last week’s victory over Utah, Washington fell short again trying to rally from down 21 points.

“Obviously, a loss that is going to sting for us for a little while here,” Washington coach Jimmy Lake said. “This is two consecutive weeks that we have not come out of the gates the way we need to. Our team knows that.”

Dylan Morris was 15 of 23 passing for 254 yards for Washington. The Huskies trailed 24-3 at halftime, but scored on each of its first three second-half possessions. Sean McGrew had a pair of TD runs sandwiched around Morris’ 1-yard sneak. McGrew’s 2-yard run with 11:03 left pulled Washington within 31-23.

Trent McDuffie forced Jones to fumble on Stanford’s next drive and Edefuan Ulofoshio returned it to the Cardinal 10. But a pair of holding calls — one of which wiped out a touchdown — forced Washington to settle for Peyton Henry’s 45-yard field goal and a 31-26 deficit with 7:54 left.

The Huskies never got the ball back.

“You can’t, can’t be down 21-0 and expect to be cardiac kids and be miracle miracle workers,” Ulofoshio said. “That’s not football. As a defense we've got to be consistent and we didn't do that today.”

Stanford: The Cardinal thoroughly dominated the first half, scoring on all four possessions. The Cardinal had 270 total yards, 14 first downs, were 6 of 7 on third downs and on the one they didn’t get, converted on fourth down. A week ago, Stanford had just 300 total yards on offense in its one-point win over California, and nearly topped that total in just 30 minutes against Washington.

Washington: The Huskies were without their top two wide receivers. Puka Nacua and Terrell Bynum both did not play. Bynum was on the sideline but not in pads while Nacua was not seen. Nacua had nine catches and Bynum had eight in the first three games. Without the pair, Washington started freshmen Jalen McMillan and Rome Odunze at wide receiver and while pair had flashes of promise, both continued to struggle with drops that have been a problem for all Washington receivers this season. Odunze had five catches for 69 yards, while McMillan was limited to one catch for 16 yards.

Stanford: At Oregon State next Saturday.

Washington: At No. 21 Oregon next Saturday.