Jones, No. 1 Alabama return to action against Kentucky 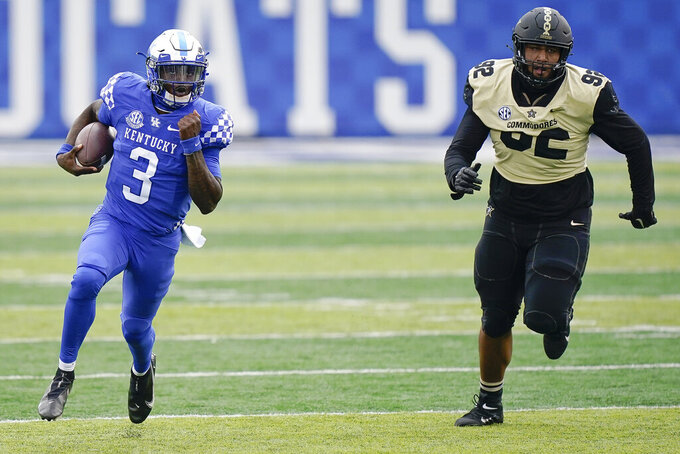 Kentucky quarterback Terry Wilson (3) runs with the ball during the first half of an NCAA college football game against Vanderbilt, Saturday, Nov. 14, 2020, in Lexington, Ky. (AP Photo/Bryan Woolston) 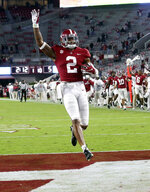 Alabama is trying to shake the rust off after a three-week layoff, with a scheduled open date and another because of LSU's COVID-19 problems. The Tide would seem to have a clear path to the SEC championship game. Kentucky could make a huge statement for this team if it was able to pull off the upset.

QB Mac Jones and Alabama's passing game against Kentucky's defense. The Crimson Tide ranks third nationally with an average of 380 yards per game through the air. Kentucky is surrendering a respectable 241.1 on average and is fourth nationally with 11 interceptions. The Wildcats picked off six passes against Mississippi State and three against Tennessee. They also have scored three defensive touchdowns.

Kentucky: QB Terry Wilson will likely need to make plays running and passing for the Wildcats to have a chance at the upset. Wilson is 15-6 as a starter and was an efficient 13-of-15 passing against Vanderbilt with 83 rushing yards, accounting for three total touchdowns.

Alabama: RB Najee Harris has already run for 14 touchdowns despite being kept out of the end zone for the first time this season against Mississippi State. He's leading the SEC in touchdowns and rushing yards per game, averaging 119.

Alabama has won 29 straight games against SEC East opponents and an FBS-record 95 in a row over unranked teams. ... The Tide and Wildcats have met just 14 times since the 1947 season, Alabama winning 13 of them. Heisman Trophy finalist Tim Couch led Kentucky to a 40-34 overtime win in 1997. ... The Wildcats honored the memory of offensive line coach John Schlarman in the Vanderbilt game, including leaving the left guard spot open on the first play. Schlarman had died of cancer two days before the game. ... Kentucky's last win over a Top 10 team on the road was a 24-20 victory over No. 4 Penn State in 1976. The Wildcats haven't done it in an SEC road game since 1964, a 27-21 upset of No. 1 Mississippi.