Justin Herbert, Troy Dye are back to complete Oregon's rise 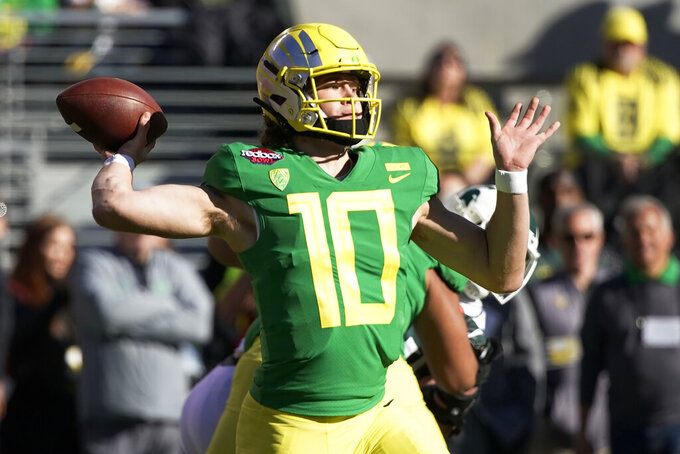 FILE - In this Dec. 31, 2018, file photo, Oregon quarterback Justin Herbert throws a pass during the first half of the Redbox Bowl NCAA college football game in Santa Clara, Calif. Herbert is among the top returning talents in the Pac-12, and the Ducks' hopes of league title contention in coach Mario Cristobal's second season could hinge on whether his quarterback improves on last year's 3,000-yard campaign. (AP Photo/Tony Avelar, File) 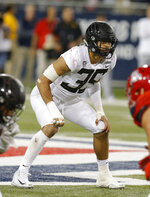 EUGENE, Ore. (AP) — Expectations are high for the Oregon Ducks this season, from both outside the team and from within.

Quarterback Justin Herbert opted to stay at Oregon rather than bolt early for the NFL and he often points to the relationships he's cultivated over three seasons in Eugene and the desire to see things through as the reasons why. Linebacker Troy Dye echoed the sentiment, pointing to the team's growth since his first year.

"I think if you look at the team aspect, definitely it has changed, it's a total flip. Guys are really glad to be here, they help each other out. There's a lot more team camaraderie. It's a tighter unit," Dye said. "Guys can trust each other a lot more, depend on each other, not just on the field but off the field."

Herbert and Dye have played for three head coaches: Mark Helfrich, Willie Taggart and now Mario Cristobal. Despite the staff turmoil, the team has improved each season. Oregon finished last season at 9-4, capped by a victory over Michigan State in the RedBox Bowl.

Cristobal, entering his second season as coach, has spoken about the importance of building team culture and insists it's not just a tagline. The players seem to be genuinely buying in.

"Living a hungry, a humble and a driven life and approaching our opportunity in that way really is important to us and it shows in the way that we do things on a daily basis and we want to continue along those lines," he said.

For now, a lot of the leadership responsibility on offense falls to Herbert, who threw for 3,153 yards with 29 touchdowns last season. He has tossed at least one TD in 28 straight games, the longest current streak in the nation.

Over his 28 career starts, the Ducks have averaged 38.3 points a game.

Herbert was even featured on the cover of one of Sports Illustrated's college football preview editions, which proclaimed 2019 the year of the quarterback.

And indeed, Herbert is one of the reasons the Ducks are picked to finish atop the Pac-12 North.

Other things to know:

OPENING WITH AUBURN: Oregon's high-profile opener against Auburn, a rematch of sorts of the 2011 national championship game, is set for Aug. 31 at AT&T Stadium in Arlington, Texas. The Tigers opened last season ranked in the top 10 but finished 8-5. The team is in the midst of a quarterback competition between redshirt freshman Joey Gatewood, whose only action came in a bowl blowout, and five-star recruit Bo Nix.

Oregon opens Pac-12 play at Stanford on Sept. 21. The Ducks will also be on the road to face rival Washington on Oct. 19.

RECRUITING CLASS: Oregon's recruiting class for 2019 was considered among the top 10 in the nation, and was the best class in the program's history.

DEFENSE: Oregon has a new defense under Andy Avalos, who joined the Ducks in the offseason after seven seasons at Boise State. Avalos took over when defensive coordinator Jim Leavitt parted ways with Oregon in February.

MOVING ON: Receiver Dillon Mitchell caught a team-best 75 passes for 1,184 yards and 10 touchdowns last season before leaving early for the NFL. He was a seventh-round pick by the Minnesota Vikings.