K-State beats up on Kansas, sends notice to Big 12 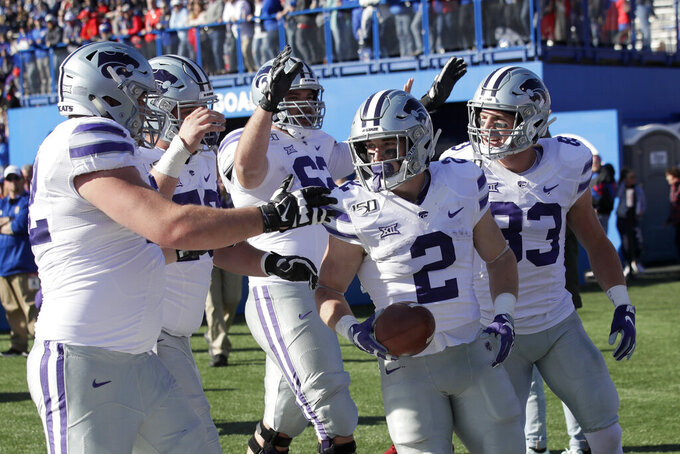 Kansas State running back Harry Trotter (2) celebrates a touchdown with teammates during the first half of an NCAA college football game against Kansas in Lawrence, Kan., Saturday, Nov. 2, 2019. (AP Photo/Orlin Wagner) 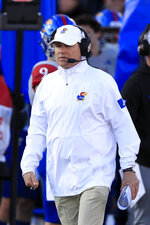 MANHATTAN, Kan. (AP) — There is a documentary series called "Miles to Go" chronicling Les Miles' first season at Kansas, and during an episode following the Jayhawks' last-second win over Texas Tech, he brazenly walked into the locker room and asked his team, "Who is K-State?"

Miles knew the annual Sunflower Showdown was on deck the next weekend.

Well, the former Oklahoma State coach surely remembers who the Wildcats are now.

After knocking off then-No. 5 Oklahoma in a game far more lopsided than the 48-41 final score, the No. 20 Wildcats romped to a 38-10 victory over the Jayhawks on Saturday. And that score also was not indicative of the way Kansas State manhandled its neighbors just down Interstate 70.

The Wildcats ran for 342 yards despite missing their top two running backs. They needed to throw the ball just 16 times all game. Only one of those throws came on an opening 10-play, 88-yard march to the end zone that essentially set the tone for the entire afternoon.

"We didn't think of this game any bigger than it is," said Wildcats quarterback Skylar Thompson, who ran for 127 yards and three scores. "We dominated them in the trenches, and you could tell in the third and fourth quarter that they didn't want to be a part of it."

On defense, the Wildcats (6-2, 3-2) held an offense that had been humming under new coordinator Brent Dearmon to fewer than 200 yards until the final drive. Carter Stanley was 13 of 23 for 115 yards with two interceptions, and the Jayhawks' running game managed just 61 yards.

If not for a litany of penalties against Kansas State, those numbers would have been worse.

"I mean, you could see it as the game went on, just us continuing to do our job and being in the right spots," Kansas State linebacker Da'quan Patton said. "I mean, it means a lot because it's a huge rivalry game and you know everyone comes out to watch this game."

The game was about as lopsided as the series has become.

Kansas State has won 11 straight against the Jayhawks, and 23 of the past 27, going back to the first tenure of former coach Bill Snyder. Since 2010, shortly after Snyder returned from a brief retirement, the Wildcats (6-0) have won just as many games in Lawrence as the Jayhawks (6-37).

The Wildcats also answered the question Miles posed: They showed exactly who they are in what new coach Chris Klieman called their best all-around performance of the season.

They dominated the game on the ground, dictating the tempo and holding the ball for more than 38 minutes. They ran for big chunks on first down to give them options on second, and called just enough pass plays to keep the Jayhawks from crowding the line of scrimmage.

It looked a whole lot like the way Klieman's teams bludgeoned opponents at North Dakota State, when he was busy winning FCS national championships with the regularity of winter snowfall.

On defense, the Wildcats won at the point of attack, stuffing up the Jayhawks' running game and forcing them into second- and third-and-long. Then, boxed into obvious passing situations, Kansas State dialed up blitzes that usually resulted in Stanley running for dear life.

"I never in a million years saw that result coming," Stanley said.

Now, the Wildcats can turn their attention to bigger things. They became bowl-eligible with the win, but still harbor hopes of playing for the Big 12 championship. They are tied with Iowa State and Texas in the standings, trailing unbeaten Baylor and the Sooners. But if Oklahoma stumbles again, and Kansas State wins out, it could sneak into the title game.

The finishing stretch begins Saturday with a trip to Texas, followed by a home game against West Virginia. Texas Tech on the road and the Cyclones at home wrap up the regular season.

So going back to the question posed by Miles: "Who is K-State?"

He had his answer Saturday night.

"It's exactly the style of rivalry that I'm used to seeing, close proximity, people that — they know us, we know them, and it was hard-fought," Miles said. "Yeah, they're pretty talented."