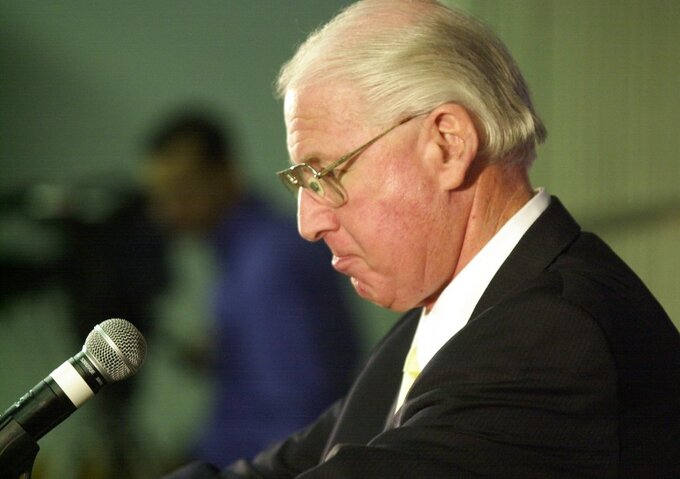 FILE - In this Nov. 15, 2005, file photo, Kansas State football coach Bill Snyder holds back tears as he announces that he will step down and retire after a game with Missouri, in Manhattan, Kan. Kansas State has gone through the unenviable process of replacing a legend once before, and results were so disappointing that Bill Snyder came out of retirement to put the program back on track. Now, the Wildcats get a do-over. The 79-year-old Snyder announced in a statement Sunday, Dec. 2, 2018, he was retiring for a second and final time as the coach at Kansas State. (AP Photo/The Wichita Eagle, Jeff Tuttle, File)/The Wichita Eagle via AP)

KANSAS CITY, Mo. (AP) — Kansas State has gone through the unenviable process of replacing a coaching great before, and the results were so disappointing that Bill Snyder came out of retirement to put the program back on track.

Now, the Wildcats get a do-over.

The 79-year-old Snyder announced Sunday he was retiring for a second time as the coach at Kansas State. The move brought an end to his Hall of Fame career and opened up the job for only the second time in the past three decades.

The first time, after Snyder retired in 2005, then-athletic director Tim Weiser hired the relatively unknown Ron Prince as head coach. The former Virginia offensive coordinator went 17-20 with one bowl appearance, but the slide of the once-proud Kansas State program was evident.

This time, it will be up to Gene Taylor to make a better choice.

He was hired as athletic director last year, and from the moment Taylor signed on, he knew one day he would be searching for a football coach. So like any good administrator, Taylor compiled a list of potential candidates that he kept at the ready — even as Snyder decided last fall to return for one more season — and he will no doubt be reaching out to those individuals soon.

"Our priority will be to identify the absolute best individual to lead our football program and we will do so in a timely yet exhaustive manner," Taylor said in a statement Monday. "This is a program with rich tradition, a passionate fan base and a facility infrastructure that is second to none, and we want to find a successful coach who best fits and understands our culture here at K-State.

"We will attract some of the nation's top coaches," Taylor said, "and I look forward to introducing the K-State Nation to its next coach in the near future."

That is because time is of the essence.

In other words, there are plenty of jobs open and some high-profile names are already coming off the board. And with a new early signing period for football prospects beginning in a couple of weeks, it is even more crucial these days to hire a coach quickly enough to hit the ground recruiting.

Taylor said the search already is underway. Ventura Partners has been hired to assist with the process. And Snyder's contract stipulates that he has "appropriate input" in hiring his successor.

Here are some candidates who could be in play:

— Chris Klieman, head coach, North Dakota State. Taylor hired him to replace Craig Bohl at North Dakota State, where he is unbeaten this season as he seeks a fourth national title in five years. Klieman played at Northern Iowa and has ties to the Big 12 after serving as an assistant at Kansas.

— Jim Leavitt, defensive coordinator, Oregon. Leavitt was a popular assistant under Snyder before he built South Florida's program from scratch. But his tenure ended under intense scrutiny for his treatment of players, and he has been passed over for several head coaching jobs.

— Ricky Rahne, offensive coordinator, Penn State. Snyder thought highly enough of Rahne that he kept him on staff when Prince was fired. He has no head coaching experience, but Rahne is considered among the top offensive minds in college football and tutored the Nittany Lions' Saquon Barkley, among others.

— Brett Venables, defensive coordinator, Clemson. Considered the fan favorite to succeed Snyder, the Kansas native played at Kansas State before beginning his coaching career there. Venables also served as defensive coordinator at Oklahoma before becoming one of the nation's highest-paid assistants at Clemson.

Whoever is chosen will find a program that is only a year removed from a bowl game, has plenty of returning starters and has spent more than $200 million to renovate Bill Snyder Family Stadium and its attached football facility — with millions in additional improvements already planned.

In short, it's a program in much better shape than when Snyder arrived three decades ago.