K-State coach Klieman to get first shot at Patterson's Frogs 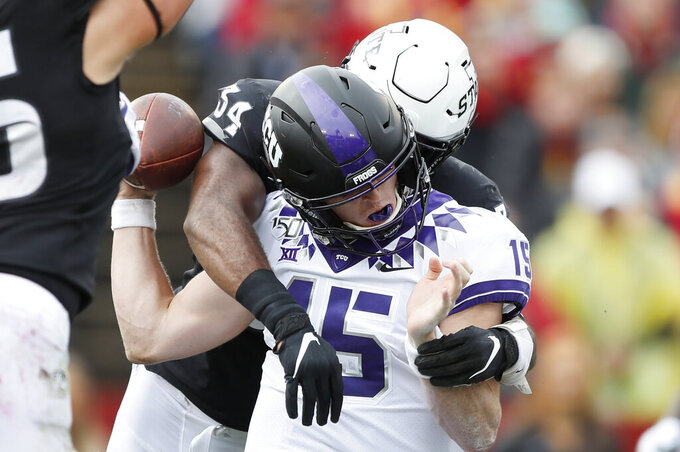 TCU quarterback Max Duggan fumbles as he is hit by Iowa State linebacker O'Rien Vance (34) during the first half of an NCAA college football game, Saturday, Oct. 5, 2019, in Ames, Iowa. (AP Photo/Charlie Neibergall)

MANHATTAN, Kan. (AP) — Every time longtime Kansas State coach Bill Snyder seemed to be leaning toward retirement, it seemed as if TCU coach Gary Patterson's name would surface as the logical successor for the Wildcats.

He was born in Kansas. Played linebacker at Kansas State. Got his first coaching gig, as a graduate assistant, with the Wildcats. He even coached at Pittsburg State, a Division II school in Kansas.

Things never quite worked out, though. Patterson was having too much success with the Horned Frogs to contemplate a move very seriously, so Kansas State hired a nondescript offensive coordinator named Ron Prince the first time Snyder retired — a hiring that turned out to be an abject failure.

The second go-around, the Wildcats hired uber-successful North Dakota State coach Chris Klieman, who had no ties at all to the school but now gets to match wits with Patterson on Saturday.

"They're very physical. I think that's the first thing that you notice on film is how physical Coach Patterson's defense plays," Klieman said. "They hit their fits, they know their assignments, they know where their help's at, they know if they are a lever player or a spill player. They do all the fundamental things right."

Funny thing about that? Klieman's teams have the same reputation.

Yet the Wildcats (3-2, 0-2 Big 12) are coming off a bye week that followed back-to-back conference losses marked by poor tackling, penalties and other uncharacteristic miscues. It put them in a tough spot where a win over the Horned Frogs (3-2, 1-1) could become crucial for their bowl hopes.

"We are all hungry and itching to get back out there," running back James Gilbert said. "There's a lot of football left. Seven games. That's a lot of stuff we can play for with this football team."

TCU isn't exactly rolling into town with a whole lot of momentum, either. The Horned Frogs lost a nail-biter to SMU, then smacked around lowly Kansas, before getting pounded by Iowa State last weekend in a game in which very little went right.

Max Duggan was erratic throwing. The running game was lousy. And that tough defense was a pushover.

"It's been a tale of two teams. We either have played really well or haven't played well," Patterson said. "The key for us is to get to where we're playing good."

RUN FOR YOUR LIFE

The Wildcats dominated the early part of their schedule by pounding the ball, an old-school approach to offense. But Oklahoma State and Baylor largely shut that down in a pair of road defeats.

"It's very important. Establishing the run game sets up the rest of the offense," running back Harry Trotter said, "and it's very important for us to do that so we can help Skylar (Thompson) out and help the receivers. The running game is where you can establish that and set up the pass game."

TCU should get wide receivers Taye Barber and Mikel Barkley back from injuries this weekend. Barber started the opener but has yet to catch a pass this season, while Barkley has not made it onto the field after he transferred from Palomar College.

K-State's biggest pass-catching threat, Malik Knowles, continues to struggle with injuries of his own. Klieman said it was "up in the air" as to whether Knowles plays against TCU, but the Wildcats' coach acknowledged Tuesday that the wide receiver didn't practice early this week.

Patterson said he won't be grilling backup quarterback Alex Delton, who transferred from Kansas State in the offseason, for any insider info. Delton lost the starting job to Thompson before leaving.

"I've tried not to put Alex in that situation," Patterson said. "It's our job to see what they do and don't do. They're playing a different scheme."

The Wildcats ripped off three straight wins to start the season, then had a bye, then lost back-to-back games to open Big 12 play before another bye. Klieman admitted the schedule, which was set long before he took over the program, has been far from ideal.

"I'm not a fan of it. Football is a rhythm sport," he said. "You have to play to improve. You get better through competition. I appreciate the two bye weeks, but to have them so close back to back, some guys couldn't get any real benefit for it. And then new guys just need to continue to play games."