K-State heads into Year 2 under Klieman with high hopes 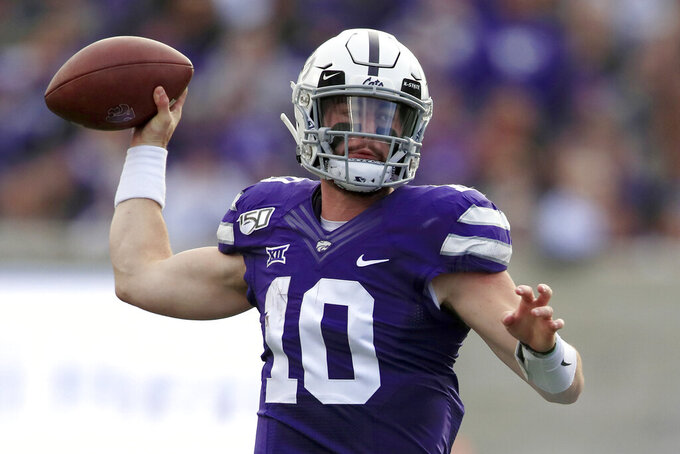 FILE - In this Nov. 16, 2019, file photo, Kansas State quarterback Skylar Thompson (10) passes to a teammate during the first half of an NCAA college football game against West Virginia in Manhattan, Kan. Thompson is back to direct the offense heading into the opener Sept. 12, 2020, against Arkansas State. (AP Photo/Orlin Wagner, File)

MANHATTAN, Kan. (AP) — One of these days, Kansas State coach Chris Klieman will go through an offseason full of familiarity.

He hasn't had one yet.

He was hired away from North Dakota State to replace Bill Snyder, the Wildcats' longtime Hall of Fame coach, and spent his first offseason building a coaching staff while trying to put together a recruiting class. And his second offseason has been an unusual one for everyone in college sports as the coronavirus pandemic grips the nation.

Maybe that long-awaited familiarity will finally arrive when the Wildcats take the field against Arkansas State on Sept. 12.

“Everything has been unusual. We're using the visitors’ locker room as well as the home locker room so not everybody is together. Unless we use Bramlage (Coliseum), we don’t have team meetings,” Klieman said. “When we lift, we lift in groups of four as opposed to just offense and defense, it’s four groups to lift in. For position meetings, we’re using the West Stadium Club because it has bigger areas. There’s nothing that’s been normal about this camp, and the guys just have to overcome.”

There are plenty of things to overcome once the season begins, too. The Wildcats won't have the usual three-game non-conference schedule to adjust to life with a new offensive line, rebuilt defensive line and young group of running backs. And they won't have as big of home-field advantage with capacity limited by COVID-19 at Bill Snyder Family Stadium.

But at least they have four-year starter Skylar Thompson at quarterback, and a group of veteran playmakers led by tackling machine Justin Hughes on defense to help overcome the loss of defensive coordinator Scottie Hazelton.

Joe Klanderman has been promoted from defensive backs coach to handle that side of the ball.

“I just think having Skylar back with the communication he has with a lot of the wide receivers and tight ends that will be available that will play will help us,” Klieman said. “I’ve talked to Coach Klanderman – we’re not changing wholesale on defense. We are tweaking some things that Joe just feels more comfortable with, but the kids wouldn’t know it. The general fan wouldn’t know it. We’ll still look the same.”

Maybe there is some familiarity at Kansas State after all.

After playing Arkansas State, the Wildcats head straight into a tough test at Oklahoma. But then comes four consecutive games against teams that failed to reach a bowl game — Texas Tech, TCU, Kansas and West Virginia. The Wildcats may need to sweep them to have any chance of finishing above .500 this season.

“There were probably three or four teams that had reached out to us for the potential to play. Arkansas State was one of the early ones, and we just kept that conversation going,” Kansas State athletic director Gene Taylor said.

The Wildcats had one of the most experienced offensive lines in the Big 12 last season. Now they have one of the least. The only spots that appeared to be locks heading into September were Noah Johnson at center and Josh Rivas at guard. It could come down to game week for the other three spots to be settled.

The Wildcats will need big contributions from redshirt freshman Joe Ervin and true freshman Jacardia Wright at running back. They also need star return man Josh Youngblood to showcase the same game-breaking talent on offense that he showed on special teams.

Along with freshman, the Wildcats welcomed a series of transfers who should help immediately. Kiondre Thomas arrived from Minnesota and Hunter Henry from Rice, and both should get time in the defensive backfield. Briley Moore should give the Wildcats a big upgrade at tight end after arriving from Northern Iowa.

“I know how much the tight end means in their offense,” Moore said. "Once I entered the transfer portal, I ended up texting Skylar later that day. I tried not to text him before that. I was even thinking about it because I didn’t want to jinx anything. I texted him later that day after I had talked to K-State a couple of times. It was almost a no-brainer from there.”

The Wildcats paused offseason practices when players reported in June because of a brief outbreak of COVID-19. There was another minor outbreak when students reported to campus for fall classes. But the Wildcats have largely been able to avoid major disruptions to fall camp, giving them confidence on the health-front headed into the season.

“We definitely talked to them about the fact that this is the biggest challenge we’ve had so far in terms of handling your business away from the facility,” said Van Malone, the assistant head coach. “I think our guys understand that as a challenge and understand the importance of handling themselves the same way they’ve done the past few weeks.”