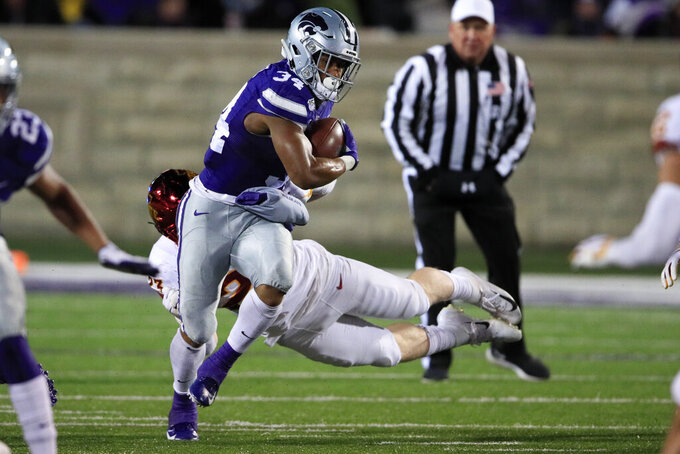 MANHATTAN, Kan. (AP) — Chris Klieman gathered his players in the locker room after a heart-stopping win at Texas Tech and challenged not his seniors, who soon would be playing their final game for Kansas State, but the rest of the guys who would be around for years to come.

The first-year coach wanted his youngsters to lay it on the line for the veterans.

“Without question,” he said, “they played an excellent football game.”

Jacardia Wright ran for a touchdown, fellow freshman Joshua Youngblood returned a kickoff 93 yards for another score, and the Wildcats’ aggressive defense shut down Brock Purdy and high-flying Iowa State to win a 27-17 defensive slugfest on a cold, windy Saturday night.

The Wildcats (8-4, 5-4 Big 12) only managed 57 yards passing and 288 yards of total offense, but they scored the final 13 points while holding the Cyclones in check.

“At halftime I told the guys, ‘We just have to make some more plays. If we make some plays we’ll be fine,” Klieman said. “I could sense a lot of life on our sideline. We just had to make a play.”

There wasn’t a whole lot of life left in the Iowa State sideline by the final whistle.

Purdy was just 15 of 30 for 185 yards passing and a touchdown, and the Cyclones (7-5, 5-4) only had 236 yards in all. Their biggest problem came in converting third downs — they were 1 of 13 — and that in turn led to a massive advantage for Kansas State in time of possession.

The result: The Wildcats beat the Cyclones for the 11th time in 12 meetings in the game known as “Farmageddon.” They also have won seven straight in Manhattan against their fellow land-grant college.

“Give credit to Kansas State. On a night like tonight, I thought they were the more physical team,” Cyclones coach Matt Campbell said. “The reality of it is, my hat’s off to them. They did what they needed to do to win the game and we didn’t.”

It was Senior Day in Manhattan, but it was a freshman that provided the early fireworks.

Youngblood fielded the opening kickoff on blustery night and angled toward the Iowa State sideline, then headed up field. There was nobody in a chrome red helmet between him and the end zone, and the fleet-footed receiver cruised to his nation-leading third kick return TD of the season.

Kansas State’s offense soon got on track, too.

After taking possession inside its own 10-yard line for the third straight time, the Wildcats used nearly 7 minutes to march 98 yards for the score. They converted three third downs, got some help from a personal foul penalty and capped it with Wright’s 12-yard touchdown run.

“I had the same play in pregame warmups and I busted it the same way,” said Wright, who hadn’t played since Sept. 7 because of an ankle injury. “I was like, ‘OK!’”

That score came on fourth-and-goal at the 1-yard line, and after Campbell and Klieman hilariously traded running downfield and frantically calling a total of four total timeouts.

After trading field goals during an offensively inept third quarter, the Wildcats took advantage of good field position set up by their defense to pull ahead 24-17. Brown finished the methodical eight-play drive — entirely on the ground — by going untouched 15 yards with 10:24 left in the game.

The Cyclones were forced to punt on their next possession, and Wright and Youngblood tore off long runs to set up Blake Lynch’s chip-shot field goal that effectively put the game out of reach.

“There’s been some rough times, you know that,” Klieman said. “We’ve been on a little bit of a rollercoaster, but we continued to get better. The guys continued to buy in and learn more and get more invested in the program. Let’s credit where credit is due and that’s with the players.”

Iowa State’s offense came into the game sixth nationally in passing at 330.5 yards per game, but Purdy struggled with the stiff, cold wind out of the west. He also got little help from his receivers, who dropped several passes — a few of them on crucial third downs.

Kansas State stuck to its persona by running the ball, even though Iowa State led the Big 12 in rush defense, and it paid off. The Wildcats wore the Cyclones down at the line of scrimmage in the fourth quarter and that allowed them to break the 17-all tie.

Both teams will await their bowl destinations next weekend.