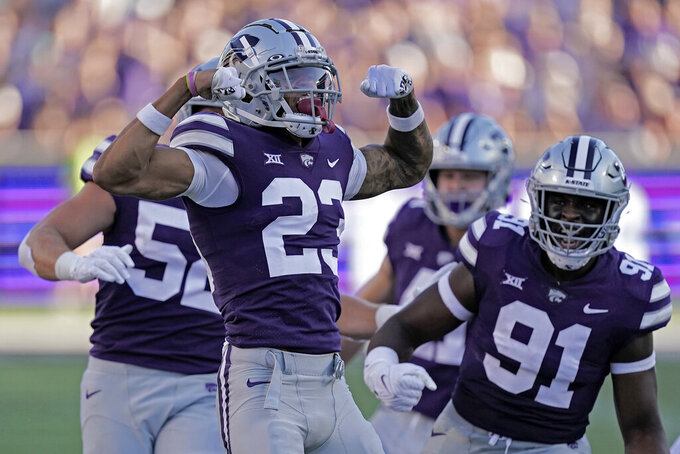 MANHATTAN, Kan. (AP) — The hallmark of the early Bill Snyder teams at Kansas State was a dominating defense, one so ferocious that highlights of players engulfing a running back or ripping the helmet off a quarterback are still shown in the stadium today.

Turns out that's becoming the hallmark of the early teams under Chris Klieman, too.

The Wildcats opened the season with one of the handful of shutouts across Division I, a 34-0 victory over South Dakota that was even more lopsided than the final score. And they followed up with a 42-12 blowout of former Big 12 rival Missouri in which the only touchdown allowed came on an untimed down to finish the game.

The only team to allow fewer touchdowns is Georgia. Only four other teams are allowing fewer points per game.

“Those guys are flying to the football and that's the kind of tenacity and physicality that we want to have,” said Klieman, who has spent the majority of his three-plus decades in college football coaching that side of the ball.

“I think that’s so critical to our success,” Klieman said. “They run if there are loafs on the field and they get passed up by a teammate in practice. We chart all that stuff, and those guys are excited for each other when they make a play.”

Sounds a lot like the Wildcats while Snyder was building them into a perennial power.

With early coordinator Phil Bennett, and later Bob Elliott running the show, the Wildcats consistently had one of the 10 best defenses in the country. And they produced NFL draft picks regularly: Thomas Randolph was a second-round pick in 1994, fellow defensive back Chris Canty was a first-rounder a few years later, linebacker Mark Simoneau helped New Orleans win the Super Bowl and cornerback Terence Newman won the Thorpe Award before a 15-year NFL career.

Some fans began calling them “the lynch mob,” a politically incorrect name soon shortened to simply “the mob.” And that's exactly what they looked like on the field, flowing to the ball and making life miserable for opposing offenses.

The similarities to the defense Klieman and coordinator Joe Klanderman have fielded this year are striking.

The Wildcats have held their first two opponents to 1 yard or less on 25 plays, frequently spending as much time in the backfield as the opposing quarterback — who, incidentally, has been sacked five times. And things aren't much better when they have time to throw: The Wildcats have picked off five passes, their most through two games since 2000.

“I started getting a little confused out there, like, ‘What’s going on?' One after the other after the other," Kansas State defensive tackle Eli Huggins said. “Every time I was about to sit down, I had to stand back up.”

The Wildcats' defense wasn't nearly so ferocious through the first part of last season. But that's when Klanderman, who followed Klieman from North Dakota State, made a stunningly ambitious decision to scrap his system for a 3-3-5 setup that would better fit Kansas State's personnel while dealing with the overwhelming speed across the Big 12.

Despite being a work in progress, the Wildcats did not allow anyone to score more than 22 points in their last six games, and an offseason spent tweaking the system has only produced better results this season.

“We still got a long way to go," Klanderman said. “I mean, we’re still developing.”

That development has a lot to do with incorporating newcomers.

Sure, the Wildcats return All-American candidate Felix Anudike-Uzomah at defensive end, and their defensive front and their linebacker corps are among the best in the Big 12. But questions abounded in the backfield, where hard-hitting junior college safety Kobe Savage has teamed with Virginia transfer Josh Hayes to form an intimidating back-end tandem.

“I think they’re phenomenal,” Klanderman said. "Kobe, in particular, improved so much from Week 1 to Week 2. I know he had a pretty good game against South Dakota, but he was better against Missouri. And I think Josh, having missed the South Dakota game, will improve quite a bit between what he did against Missouri and what he can do this week.”

If there is improvement to be done, it had better happen in a hurry.

The Wildcats face another defense-minded opponent in Tulane on Saturday to wrap up their nonconference schedule, then they head south to face sixth-ranked Oklahoma in one of marquee showdowns of the early Big 12 slate.