Kalen DeBoer takes the reins as head coach at Washington 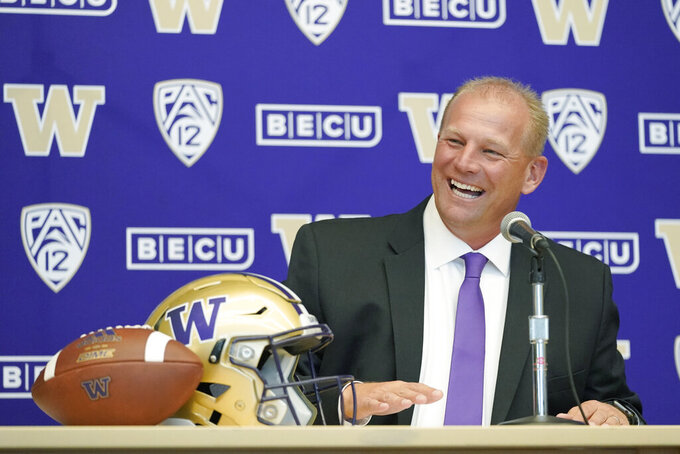 Kalen DeBoer speaks during a news conference, Tuesday, Nov. 30, 2021, in Seattle, to introduce him as the new head NCAA college football coach at the University of Washington. DeBoer has spent the past two seasons as head football coach at Fresno State. (AP Photo/Ted S. Warren)

SEATTLE (AP) — At some point during the whirlwind of the past few days, Kalen DeBoer grabbed the phone and for the first time in his coaching career had a conversation with Chris Petersen.

One of DeBoer’s big questions for the highly successful former coach and someone he admired from afar: How best to make the transition from coaching at a Mountain West school to being the head coach at Washington?

“I think his experience moving from Boise (State) here, I think is very relatable to my situation. ... I’ll pick his brain as well as others on what’s been successful here and how to attack it. It was just really good dialogue and understanding Washington in general,” DeBoer said Tuesday.

Washington is hoping that dipping back into the Mountain West pool by hiring DeBoer will help the school replicate the success it had when Petersen made the move from Boise State to join the Huskies in 2013.

After two seasons as the head coach at Fresno State, DeBoer agreed to a five-year, $16.5 million deal with Washington. The contract starts at $3.1 million in guaranteed compensation, escalates by $100,000 per year and is strikingly similar to the deal former coach Jimmy Lake was working under prior to his firing in mid-November.

Washington will also pay $1.5 million to Fresno State to cover the buyout of DeBoer’s contract with the Bulldogs. It’s not a splash move like USC getting Lincoln Riley, but appears to be a hire that fits the Huskies.

Petersen, who was at the back of the room for DeBoer’s introductory news conference, was cited by Cohen as a valuable resource during the coaching search. DeBoer said that along with speaking to Petersen, he had conversations with trusted mentor Jeff Tedford, who spent 11 seasons as a head coach in the Pac-12 at California and worked as a consultant for Washington in 2016.

“I think just first and foremost, he (Tedford) just said this is an amazing place. And I didn’t really have to ask why,” DeBoer said. “I think it always comes back to the things I’ve talked about — the community, the people that you’re around. He just felt very strong about that and he knew this was a great opportunity for me.”

While Tedford was a mentor, DeBoer is most likely to be compared with Petersen because they were both Mountain West coaches, their backgrounds as offensive innovators and their foundations being set as players and young coaches at small colleges.

Petersen had a longer track record of success on a national scale when he came to Washington, which is where DeBoer is lacking. Petersen was 92-12 in eight seasons at Boise State. He went 51-26 during six seasons at Washington, including two Pac-12 championships and a College Football Playoff appearance.

But the 47-year-old DeBoer has won at nearly every stop along the way, including a 63-7 record and three NAIA championships in five seasons as head coach at Sioux Falls, his alma mater.

DeBoer went 12-6 in his two seasons at Fresno State, including a 9-3 record this season that included a win at UCLA.

DeBoer met with Washington’s players on Monday night after the hiring was announced and had meetings again Tuesday as he starts to build the foundation for what he believes can be a quick turnaround for the Huskies, who finished 4-8 for their first losing season since 2009.

“You have to go every single day with everything you got. It starts with me, because I understand these guys, the head coach is who they’re coming to play for,” DeBoer said. “So it’s an everyday thing, and we all got to be aligned as far as doing a good job with our evaluations, but working extremely hard to build those relationships with those players, with everyone.”