Kansas tries to right passing game against No. 3 Oklahoma 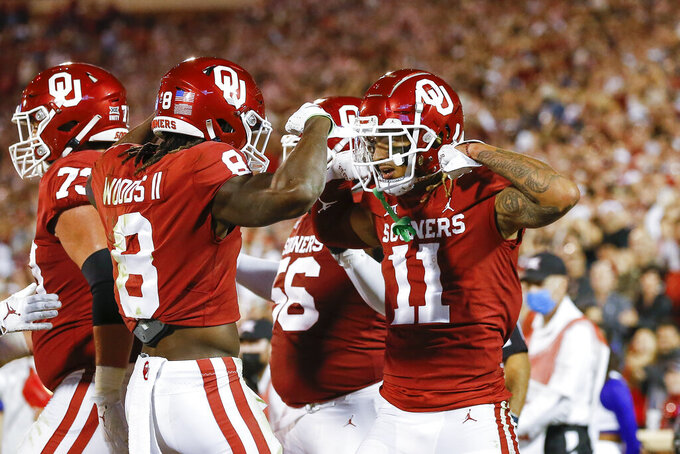 Oklahoma wide receiver Jadon Haselwood (11) celebrates after scoring a touchdown during the first half of an NCAA college football game against TCU, Saturday, Oct. 16, 2021, in Norman, Okla. (AP Photo/Alonzo Adams)

Line: Oklahoma by 38 1/2, according to FanDuel Sportsbook.

Oklahoma is in the playoff conversation again and on a collision course for one of the best Bedlam games against Oklahoma State when they meet next month. Kansas is trying to win a conference game for the first time in nearly two years and attempting to beat Oklahoma for the first time since 1997.

Kansas QB Jason Bean has not been very good throwing the ball in the first three Big 12 games this season. He has thrown for just over 75 yards on average per conference game. The Oklahoma secondary is missing three cornerbacks and will find how much depth they have this week.

Oklahoma: RB Kennedy Brooks has run for 370 yards and three touchdowns in the past two games. He should have a chance to have his biggest game of the season against a defense that allows 250 yards per game on the ground.

Kansas State: QB Miles Kendrick could be put in the game if Bean struggles. Kendrick threw for two touchdowns late in the 41-14 loss to Texas Tech last week. The Jayhawks need to throw the ball well to have any chance against Oklahoma.

Oklahoma beat TCU last week 52-31 when QB Caleb Williams threw for four touchdowns and ran one in. ... They have won 15 straight games, which is the longest active streak in the nation. ... The Sooners are trying to beat Kansas for the 17th straight time with none of those wins being by less than 14 points. ... Williams has thrown for 661 yards, and has eight touchdowns since Spencer Rattler was benched for the true freshman. ... Kansas is looking for its first win against a ranked opponent in 10 years. It would also be their first win against a ranked conference opponent in 16 years. ... The Jayhawks are one of the least penalized teams in the country with just 27 calls against them this year, best in the Big 12.