Kelly’s UCLA looks for repeat in crosstown showdown with USC 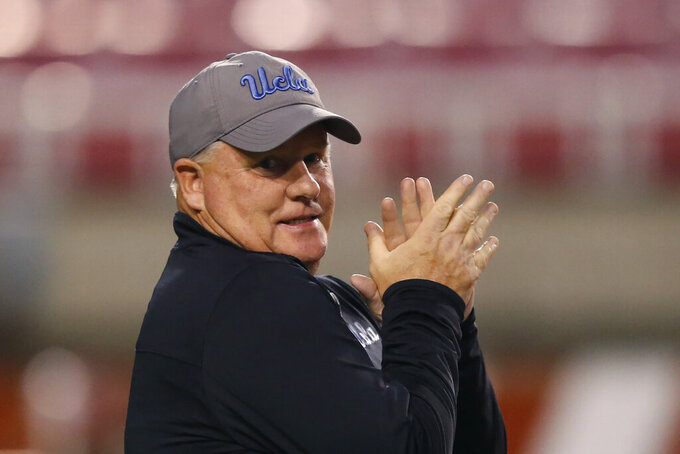 LOS ANGELES (AP) — Although Chip Kelly’s tenure at UCLA has been pretty rough so far, the Bruins’ win over Southern California last November was a thing of beauty for his players and alumni.

In the ensuing year, the Bruins have made the most of their biggest achievement under Kelly, the high-priced coach whose rebuilding project is still in its developmental stages.

UCLA has displayed the Victory Bell in the lobby of its opulent new training complex, and the Bruins have had the trophy on the sideline with them for other games.

“Always good to have it around,” said running back Joshua Kelley, whose series-record 289 yards and two touchdowns carried the Bruins last season. “That is part of the tradition of the whole rivalry. (The Trojans) are going to be fired up.”

Clay Helton’s Trojans (7-4, 6-2 Pac-12) get their rematch with Kelly’s Bruins (4-6, 4-3) at the Coliseum on Saturday in the 89th edition of Los Angeles’ famed crosstown showdown. UCLA would never need extra motivation to face its rivals, but a win also would keep the Bruins in contention for bowl eligibility.

“(There’s) such a familiarity between the players,” said Kelly, who is 7-15 at UCLA. “There’s a lot more intimate knowledge. That part of it is exciting for the players to compete.”

USC has lost to UCLA at the Coliseum just once since 1997, and these Trojans are in much better shape to handle the crosstown challenge than the lugubrious team that lost five of six down the stretch last season and got embarrassed by the Bruins.

The Trojans have won four of five in the second half of this season to secure bowl eligibility, and they’ve only lost at home to No. 6 Oregon all year. They’ve stayed right on the tail of Pac-12 South leader Utah, which took its only loss at the Coliseum.

That’s why USC is a two-touchdown favorite to beat UCLA, but the Trojans aren’t taking anything for granted.

“It might feel like a little more because it’s a crosstown rivalry and the winner gets to talk trash, but it’s just another game and we have to be ready,” USC receiver Michael Pittman Jr. said.

The rivalry game is also the Trojans’ regular season finale, thanks to a curiously placed final week without a game in USC’s baffling 2019 schedule. That means the speculation on Helton’s future will rev up immediately afterward, although new athletic director Mike Bohn has already said he isn’t in a rush to make a decision about who will be in charge of this bowl-bound team.

Helton would improve to 40-21 at USC with one more win, and he would be 4-1 against UCLA. That won’t be enough to placate a large section of the fan base, but beating the Bruins is always paramount.

“We know how important this game is to both fan bases, to our community,” Helton said. “(We know) how important the Victory Bell is, and that history. It’s a special game, and we look forward to it each and every year. You get those bragging rights for a year, and our kids take it extremely seriously.”

Kelley made his mark as one of the Pac-12’s top running backs in last year’s game, capped by his go-ahead, 55-yard touchdown run in the fourth quarter.

Kelley is second in the conference in rushing this season with 104.3 yards per game, including four 100-yard games. He also needs 61 yards to become the eighth running back in school history to go for 1,000 yards in back-to-back seasons.

While everyone still wants to bring up last year’s game, Kelley is trying to keep the focus on Saturday.

“We had success last year, but we are trying to keep tunnel vision. It’s a new year and USC is going to be a huge challenge,” he said.

USC quarterback Kedon Slovis completes his promising freshman season with his first taste of this rivalry when he goes up against UCLA’s lackluster pass defense. He watched on television while Sam Darnold and Josh Rosen duked it out a few years ago, but the Arizona native doesn’t have the childhood investment of many LA players who grew up with their opponents.

“Obviously we’re extra excited this week,” said Slovis, who is averaging 377 yards passing over the past four games with 15 TDs and five interceptions.

UCLA quarterback Dorian Thompson-Robinson played just one snap in the rivalry game last year, but he will be at the controls Saturday. The sophomore has only truly dazzled in the Bruins’ wild win at Washington State, but he contributed with his arm and legs during their recent three-game winning streak.

The Bruins have done a better job getting to the quarterback lately, and their sights are set on Slovis. UCLA is averaging nearly three sacks a game in its last seven, which is a key to its defensive improvement after being ranked the worst among Power Five schools in the first half of the season.