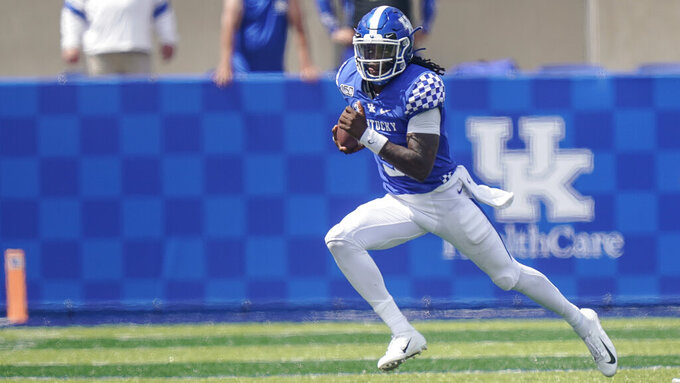 Already challenged to fill voids left by key departures from a 10-win 2018 bowl squad, quarterback injuries last year forced the Wildcats to move speedy receiver Lynn Bowden behind center. It worked out well with the consensus All-American’s feet leading the Wildcats (8-5, 3-5 SEC) to six wins in their final eight games, including a comeback Belk Bowl win over Virginia Tech capped by one of Bowden’s few touchdown passes.

Other players were able to get experience, providing Kentucky much-needed depth. Kentucky is now hoping that depth will help the Wildcats have success playing an expanded, albeit shortened, Southeastern Conference schedule featuring several Top 25 teams.

“I feel like this is the deepest team since I’ve been here,” said Stoops, who enters his eighth season with 20 starters back. “That has to help when you’re playing 10 conference games, because we all know how difficult that’ll be.

“It’ll be a real challenge. But we do have a deep team, we have a mature team. We’ll see where it goes.”

Some phases figure to look different this fall.

An offense that relied heavily on Bowden’s running aims to pass more again with QB Terry Wilson’s return from a season-ending left knee injury sustained in last year’s second game. The Wildcats averaged just 114 yards passing per game last season, a statistic overlooked because of Bowden’s dominance with the ball in his hands.

But with a solid group of receivers back — not to mention, an able trio of pass-catching backs in A.J. Rose, Kavosiey Smoke and Chris Rodriguez — the Wildcats seek balance.

“Last year we had 55 runs in a game and two passes,” offensive coordinator Eddie Gran said. “That’s not balance. We’re going to be able to because our passing game is getting better to mix it around and keep people off balance in just a different manner than we did last year.”

Kentucky’s defense also seeks balance even after ranking among the SEC’s best last season. The Wildcats were fifth overall (324.6 yards) and was tops against the pass despite remaking the secondary.

Improvement against the run is needed after they ranked in the bottom third. That’s where returning nine starters can help, with some players moving around to help the unit take another step.

And this season, do it quickly.

Some other things to watch during Kentucky’s season:

The pandemic lockdown gave Terry Wilson extra time to heal without contact. The junior QB now looks to prove he can stay healthy and display the quickness and passing skills that keyed Kentucky’s 10-win season in 2018. “I’m just out there slinging the ball, having fun and doing what I love to do, he said. “I don’t even think about the knee or anything. I’m just happy to be back out there with my brothers and getting back to it.”

Lost in Bowden’s impressive performances were solid rushing contributions by Rose (826 yards), Rodriguez (533) and big-play threat Smoke (616). The trio each had six TDs. All will be critical toward establishing ball control and potential balance through the air. Rose can become the Wildcats’ latest 1,000-yard back after Bowden, Benny Snell Jr. and Boom Williams.

Max Duffy enters as a unanimous Associated Press Preseason First Team All-America selection after leading the nation last season with a 48.10-yard average. The Australian native was a consensus first team All-American and won the Ray Guy Award as the top punter. His expertise earned him responsibility as special teams coordinator, an unpaid role he says allows him some input. “I was given the holder’s position, so he thought that was enough of an increase,” Duffy joked.

Kentucky has reported few COVID-19 cases and no player has opted out of playing this season. If anything, the Wildcats have embraced the protocols because they’re eager to play this truncated season.

The league-only slate cost Kentucky a meeting against in-state rival Louisville and three other opponents that could have eased the path to six-win bowl eligibility. They open Sept. 26 at Auburn and have added games against Mississippi (Oct. 3) and at Alabama (Nov. 21) before visiting East rival Florida the following week.