Kentucky at No. 1 Alabama highlight SEC schedule this week 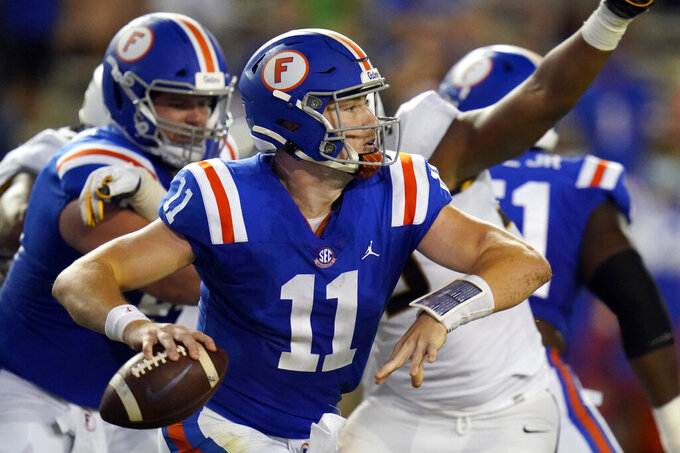 Florida quarterback Kyle Trask (11) looks for a receiver during the first half of an NCAA college football game against Missouri, Saturday, Oct. 31, 2020, in Gainesville, Fla. (AP Photo/John Raoux)

Here are things to watch in Week 9 in the Southeastern Conference:

Kentucky at No. 1 Alabama. If COVID-19 issues hadn't postponed Ole Miss at No. 5 Texas A&M, that would've been the pick for this slot just as it was for CBS. But the SEC's lone undefeated team hosting Kentucky is now in the slot. The Crimson Tide has dominated Kentucky, going 13-1 since 1947 in the series. Coach Nick Saban has never lost to Kentucky in seven games, four of those at Alabama. The Crimson Tide also has won 95 straight against unranked teams, the longest FBS streak. Kentucky (3-4) is coming off an emotional 38-35 win over Vanderbilt, which included leaving the left guard spot open on the Wildcats' opening play to honor offensive line coach John Schlarman who died of cancer two days earlier. This is a challenging two-week road swing for Kentucky with a trip to Florida next.

Missouri's passing offense vs. South Carolina's defense. The Tigers rank 44th in the nation averaging 257.2 yards passing per game. Connor Bazelak, who is completing 69.1% of his passes, will face a Gamecocks' defense that has had its starting cornerbacks opt-out after South Carolina fired Will Muschamp.

Alabama is 37-2-1 all-time against Kentucky. ... Florida has scored at least 35 points in eight straight games, tied for the longest streak in school history. It's the longest streak since Oct. 4.-Nov. 29, 2008, and the start of its 1996 national championship season. ... Tennessee won't play a home game in November for the first time since 1891 after the Vols' game with No. 5 Texas A&M was postsponed to December. ... Auburn is 81-8-4 on homecoming and has won 28 straight homecoming games. ... LSU is 12-0 coming off a loss under coach Ed Orgeron. ... This will be coach Gus Malzahn's 100th game at Auburn. ... Vanderbilt has lost 10 straight SEC games dating back to last season.

Tennessee at No. 23 Auburn. With the Vols mired in a four-game skid, this wouldn't normally merit an upset watch. But Tennessee coach Jeremy Pruitt got arguably his biggest win yet in his first season, knocking off then-No. 21 Auburn 30-24. His Volunteers desperately need another big win in his third season, and they've had time to heal up and practice with their game against Texas A&M last week postponed. Auburn has won six of the last seven in this series.