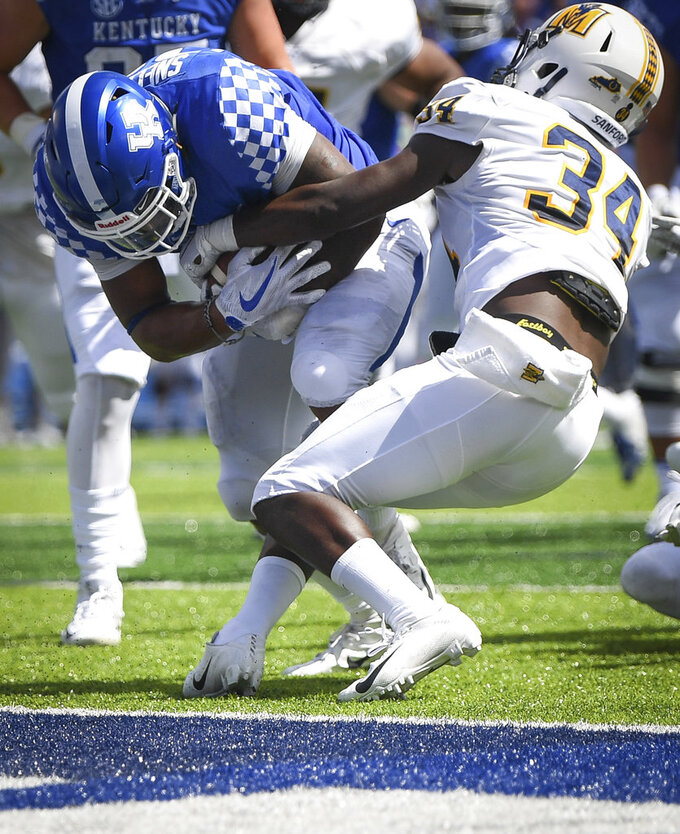 Kentucky running back Benny Snell Jr. scores a touchdown as he is tackled by Murray State defensive back Marquez Sanford (34) during the first half an NCAA college football game in Lexington, Ky., Saturday, Sept. 15, 2018. (AP Photo/Bryan Woolston) 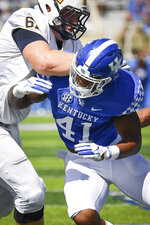 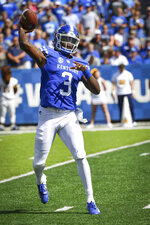 Wilson threw for 163 yards and rushed for 80 more to lead Kentucky to a 48-10 win over Murray State Saturday.

"There are things that we could have done better to start, but it does show the strength of the team," Kentucky coach Mark Stoops said. "One play at a time. You can't make it happen with one play, take it one step at a time. I always caution that in games where you want to go out there and put it away in that first drive and that doesn't happen. There's always things to learn from."

Traditionally the Wildcats have struggled against FCS opponents and needed overtime to fend off Ohio Valley Conference member Eastern Kentucky in a 34-27 win in 2015. The task was much easier this time for Kentucky.

Paced by Wilson, the Wildcats used a balanced offense to defeat the Racers, amassing 528 yards of offense, including 245 on the ground. Wilson targeted nine different receivers, mainly Lynn Bowden, who caught eight passes for 89 yards. Wilson and backup Gunnar Hoak threw for 240 yards and one touchdown.

In a surprise trick play, Snell completed a shovel pass to Wilson, who then handed the ball off to Zy'Aire Hughes for a 49-yard score to end the third quarter. Snell's block downfield created a wide-open path to the end zone for Hughes in his first career touchdown.

Although a big underdog, Murray State coach Mitch Stewart said the Racers were prepared for the task at hand.

"Obviously, we came up here for one purpose, and that was to win," he said. "The boys came up here with that purpose. I thought that they fought tremendously well. We came up short from our goal . but there were a lot of positives to take from the game . I really do think the guys played with tremendous effort today. We just wore down."

Overall, Stoops was pleased with the win and likes the where his team stands following the first three weeks of the regular season.

"We're pleased with where we're at, and we're excited to get back to work after this week," he said. "It's going to be a great opportunity (against Mississippi State)."

Murray State: In its first two games, Murray ranked No. 12 in the country after forcing five turnovers and scooping up three turnovers, but didn't have as much luck against the Wildcats, who committed six miscues in their first two contests. Kentucky had two fumbles against the Racers, but both were recovered by the Wildcats.

Kentucky: The Wildcats won their first three games for the second-straight season and the third time in the past eight years. The next three conference games are crucial for the Wildcats, who will host Mississippi State and South Carolina respectively during the next two weeks, before a road contest at Texas A&M on Oct. 6.

All active reserve members of the armed forces, police, firefighters and first responders were honored as part of Heroes Day.

During the national anthem, the United States flag was displayed that covered the field. Stoops walked to the stadium with U.S. Army Specialist Brett Bondurant, who lost both of his legs following an IED explosion in Afghanistan in 2011.