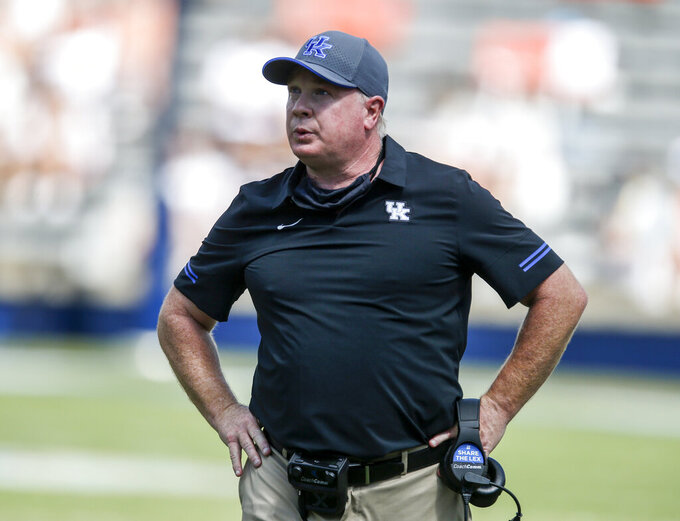 FILE - In this Saturday, Sept. 26, 2020, file photo, Kentucky head coach Mark Stoops watches a replay during the second quarter of an NCAA college football game against Auburn in Auburn, Ala. Kentucky believes its perseverance through an emotionally trying season will pay off this season with a return to winning football. The Wildcats return 14 starters from a 5-6 squad that struggled against a grueling 10-game Southeastern Conference schedule but regrouped to close with a TaxSlayer Bowl victory over North Carolina State.(AP Photo/Butch Dill, File)

LEXINGTON, Ky. (AP) — Kentucky coach Mark Stoops welcomes beginning this season with an opportunity for this team to improve before starting SEC play.

The Wildcats didn’t have that luxury last fall, beginning an all-Southeastern Conference schedule in late September at Auburn because of the coronavirus pandemic. With no margin for error, Kentucky stumbled against the Tigers and struggled for most of the season on the way to its first losing record in five years.

Saturday’s opener against Louisiana Monroe offers something closer to normal for the Wildcats: a chance for new faces to get some experience before SEC play begins next week against Missouri. Stoops expects good execution by the Wildcats in the nonconference home game, though the Wildcats should have more wiggle room for mistakes in their opener than a year ago.

“It’s a little different opening up on the road at Auburn, you know?” Stoops said this week. “Opening up at home is good with a non-SEC school.”

The coach later added with a laugh, “I mean, our league. ... I don’t need to say anymore.”

Kentucky looks to throw the ball more in new coordinator Liam Coen’s pro set scheme. The Wildcats didn't take long to name Penn State transfer Will Levis the starting quarterback, anointing him their guy after week one of camp. Stoops and Coen have praised Levis’ quick transition and big arm, and used fall camp to focus on improving his accuracy.

Defensively, the Wildcats seek to build depth from front to back with several new starters including linebacker Jacquez Jones, a Mississippi transfer who started 19 of 33 games with the Rebels.

Kentucky also pursues its first win in three tries against first-year Louisiana Monroe coach Terry Bowden, who earned those victories while guiding Auburn. (Bowden is one of four sons of former Florida State coach Bobby Bowden, a Hall of Famer who died Aug. 8 from pancreatic cancer.)

Bowden, who spent last season as a Clemson offensive consultant and graduate assistant, faces a tall task rebuilding the Warhawks. They’ve lost 11 consecutive games dating back to 2019 and didn’t lead once last season.

Snapping that double-digit losing streak won’t be easy for Louisiana Monroe with games against No. 16 LSU and Liberty, which finished 10-1 last season and No. 17 in the AP Top 25.

On the upside, the Sun Belt Conference school returns 16 starters, including nine on defense. That’s a good starting point for a turnaround, but still an uphill climb.

“We have prepared ourselves to go up there and play the best we can play. That’s all we can do.”

Some other things to watch as Kentucky opens the season:

Levis begins a new chapter at Kentucky after three seasons at Penn State, where the junior threw for 644 of his 1,117 offensive yards and three of nine touchdowns in 15 games. His likely QB counterpart is Rhett Rodriguez, the son of former Arizona head coach and current Louisiana Monroe offensive coordinator Rich Rodriguez. The junior transfer played in 11 games from 2017-20 and accounted for 1,154 yards and four TDs.

Louisiana Monroe will run a multiple 4-3 defensive scheme with nine returning starters and led by fifth-year senior linebacker Traveion Webster. He had a team-high 82 tackles last season, including 8.5 for loss, five QB hurries and 2.5 sacks. Sixth-year safety Austin Hawley is back after posting a career-high 77 stops.

After eight seasons, Stoops can reach .500 lifetime with his 50th victory in Lexington. He ranks second to legendary Paul “Bear’ Bryant (60 wins) in school history. No matter how it ends, Stoops will tie Fran Curci for the most games and seasons coached at Kentucky and is the SEC’s second-longest tenured coach behind Alabama’s Nick Saban (15 seasons).

Kentucky has won the past four to lead 4-1, including the previous meeting 48-14 in October 2014. The Wildcats have averaged nearly 44 points in their victories over the Warhawks.