Kiffin returns for No. 20 Ole Miss game with Austin Peay 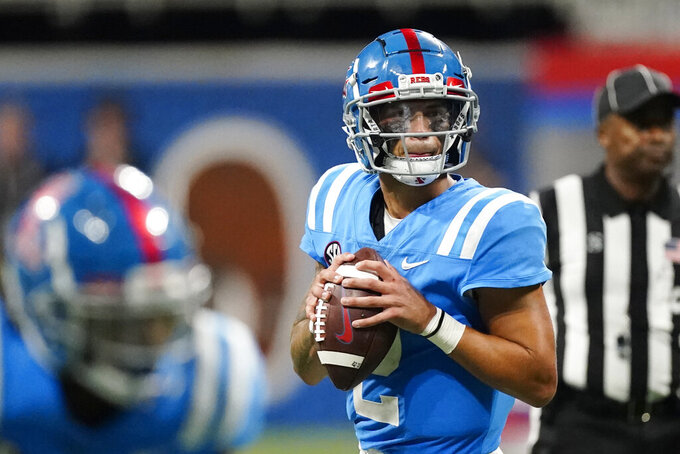 Mississippi quarterback Matt Corral (2) drops back to pass during the first half of an NCAA college football game against Louisville Monday, Sept. 6, 2021, in Atlanta. (AP Photo/John Bazemore)

Lane Kiffin returns to the sideline at the helm of a ranked team that fared well in his absence.

Kiffin leads newly ranked No. 20 Mississippi against Austin Peay, a Top 20 FCS team, Saturday night after missing the Rebels' opening win over Louisville with a breakthrough case of COVID-19.

“I will be back for the game, so excited about that,” Kiffin said.

He's also excited about the new ranking, a home game with a full crowd allowed again and an encouraging opening 43-24 win over another Power 5 team Monday night. Kiffin is hoping fans show up and don't say, “well, we’ll just wait for SEC games."

“We need people to come out,” he said. "Everyone wants a top 25 program, well let’s put an atmosphere together like a top 25 program so players feel that, and recruits see that as well.”

Kiffin, who has been an advocate for getting vaccinated, said Wednesday he had “zero symptoms” from COVID-19.

The Rebels got a short week of preparation for Game 2.

The Governors, also 1-0, are coming off their first win over Chattanooga in seven tries. Now, they'll face a Southeastern Conference opponent.

“We know we're playing a quality opponent in Ole Miss, but our preparation level is not going to change,” Austin Peay coach Scotty Walden said. “We're going to go in expecting to win and put a gameplan out there for our guys to give them a chance to go win.

“And it's a great opportunity for our guys to go into an SEC-type atmosphere and get to play in that environment.”

Austin Peay’s 30-year-old Walden is the youngest Division I head coach. Kiffin can relate since he was 31 when he became coach of the Oakland Raiders, the youngest NFL head man in the modern era. He later became the youngest FBS head coach at Tennessee in 2008, at 33.

“There’s no recipe to create experience and I’ve learned that’s life,” Kiffin said. “That’s coaching, parenting, whatever your job is. It takes experience to go through things and learn how you’ll handle them.”

Ole Miss quarterback Matt Corral should climb another spot on the school's career passing charts. He needs just 75 yards to match Jevan Snead at No. 7 (5,394 yards).

Wide receiver Dontario Drummond had career-highs with nine catches and 177 yards against Louisville. That may reflect added chemistry with Corral.

“I feel like we’ve got a strong chemistry,” Drummond said. “I make plays at practice so that puts trust in me that I’ll make plays in games for him.”

In preseason voting, the Governors tied for second place in the Ohio Valley Conference with Southeast Missouri and behind Murray State. They beat both teams in the spring. Quarterback Draylen Ellis is preseason offensive player of the year and nickelback Kordell Jackson was the pick to win the defensive honor.

Kiffin is looking forward to the pre-game Walk of Champions through The Grove, the Rebels’ popular tailgating area. The Grove was closed to tailgaters for his first season because of the pandemic.

“Excited for the first walk that we’ve had through The Grove,” Kiffin said. “First time actually stepping foot in The Grove. I’m personally excited for that.”